Are Diamondbacks Players Of The Year Cursed?

Share All sharing options for: Are Diamondbacks Players Of The Year Cursed?

As noted earlier in the week, Paul Goldschmidt and Tyler Skaggs were named the Diamondbacks Player and Pitcher of 2011 from our minor-league system. But will they succumb to the curse which appears largely to have plagued previous recipients, making even the infamous Sports Illustrated cover jinx pale by comparison? Pausing only to grab a passing black cat for luck, let's delve into the history books and take a look at how previous recipients have fared for Arizona.

Of the 28 players listed [1997 had two winners for Player of the Year, but Brad Penny won in 1997 + 1998], five did not pull on a major-league Arizona jersey - or not yet, in Wheeler's case. The remaining 23 have produced 17.1 bWAR for the franchise. However, that number is almost entirely the result of Upton. Take him out, and all the other Players of the Year in Diamondbacks history work out at a total of 5.2 WAR combined. Yes, aside from J-Up, those selected as the best and brightest prospects for the team, produced an average of just 0.2 WAR for the major-league club. Worse still, of the 16 picked between 2002-2009, the majority (ten) were below replacement level.

Obviously, no-one expects every prospect to become a star. However, the sheer level of FutureFail on view here is striking, especially when you consider that these players are the ones selected as the best in the Diamondbacks' farm system over the year in question. It's also interesting to compare the list with those chosen by Baseball America at the end of the season as our top prospect - a slightly different concept, admittedly, with the D-backs list more directly related to the year's performance. Here's the BA list: names in bold also won the team's award the same year; those in italics won the award, but in a different season.

I know the book says, "There's no such thing as a pitching prospect," but it's staggering to realize that 2010 pitcher of the year, Wade Miley, and his 0.2 WAR over 40 innings, already trails only Bret Prinz, Mike Gosling and Owings among previous pitching honorees. After six weeks in the major-leagues.That's how bad the track record for Pitchers of the Year has been. Is the team poor at developing arms? Or maybe just at identifying top talent, because if you look at Arizona's top pitchers by WAR, you'll find a good number of former prospects - most obviously Brandon Webb - who contributed far more to the team than any Pitchers of the Year.

I should mention that Owings' value includes both as a hitter and a pitcher - and, thus far, he has been more productive for the team with a bat in his hand (1.9 WAR),. than when standing on the mound (1.4 WAR). With regard to Webb and why he didn't get the award, his best minor-league season was likely 2002, when he had a 3.17 ERA over 159 innings at AA and AAA. He was likely just pipped by Gosling, who had a 3.13 ERA in 166.2 innings at Double-A. That was probably a lucky break for the Diamondbacks, if the curse is true.

Tha'ts a lot of WAR for other teams - more than 65, plus whatever you want to value Cabrera's long, productive career in Japan. What's notable here is how little the Diamondbacks received in return for the players concerned when they left. Let's review that, and list what the proceeds delivered in their time with Arizona.

Not good: a total of just 1.7 WAR the Diamondbacks got back. In (slight) mitigation, there may have been outside factors involved in some cases. Particularly, Callaspo, who was investigated by police (but never charged) over domestic violence accusations, though one suspects Cabrera's sudden departure was tied to his subsequent appearance in the Mitchell Report. That revealed "the discovery of a bottle containing steroids in the Diamondbacks clubhouse in September 2000. A clubhouse employee found the bottle and several hundred pills in a package that had been mailed to Cabrera," though the player denied the allegation. 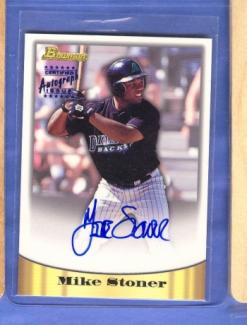 Those who never made it at all

Five previous winners have yet to see the inside of the home locker-room at Chase Field. Penny and Perez were traded away while still prospects. Penny's case was already discussed above. Perez was part of the trade to the Dodgers for Shawn Green in January 2005 - he had hit the wall at Double-A for the D-backs, posting a 5.09 ERA over three seasons in El Paso. Perez didn't make it in Los Angeles either, but did reach the majors with Washington in 2006, with a 3.86 ERA over 21 innings - that included one-hitting the Braves for six innings in his first start. However, he couldn't reproduce it and appears to have been out of baseball since 2008.

You can see why Stoner (right) got the award, hitting .358 with 33 HR and 142 RBI for the High Desert Mavericks in 1997. To this day, that remains the most runs driven in by a prospect, since Ron Kittle had 144 for the 1982 Edmonton Trappers. The next year, he was in Triple-A Tucson and, though the power evaporated, he still hit .321. In June 1999, however, he was dealt to Anaheim in a swap of outfielders for Jason Herrick, and bounced around the Angels, Cubs, Pirates and Rockies organizations. He left pro ball after 2001, save a 42 game stint in an indy league during 2004, mostly as DH for the Gary Railcats. That ended his career at over 2,400 minor-league PAs, without as much as a cup of coffee in the majors.

So, is there a curse?

Of course not. What baseball fan believes in stupid things like superstitions? [Gently kicks eels, My Little Ponies and all of Cubs fandom under the sofa....] This list is probably more evidence of the minefield that exists between "prospect" and "productive major-leaguer" - of the 30 first-round picks in, say, the 2000 draft, barely half (16) ever reached the majors, with just a handful worth significantly more over their careers to date than, say, Micah Owings. It's another way in which baseball radically differs from, say, the NFL.

This is why, while having someone like Tyler Skaggs is nice, it's probably more important to have Skaggs and Trevor Bauer and Archie Bradley and Jarrod Parker. Because, while having four aces would be awesome, the odds are a lot higher that one will be an ace, one solid, one filler, and one will flame out. Which prospect might be which? Not even going there. Let's hope that Skaggs and Goldschmidt can overcome these challenges and become long-term productive members of the Diamondbacks roster, in a way that previous winners have, for one reason or another, failed to do.