So far, the playoffs haven't been kind to the Diamondbacks' vaunted coaching staff. It's only one game. But in a 4-1 loss to the Brewers at Miller Park, third-base coach Matt Williams whiffed on a judgment call to send a runner home in the first inning; Kirk Gibson, impending Manager of the Year, bucked conventional wisdom twice and paid a heavy price.
-- Dan Bickley

It's very easy to look at yesterday's contest, and criticize three coaching decisions which appeared to go wrong. In the first inning, Willie Bloomquist tried to score from second on a single by Justin Upton, and was easily gunned down at the plate. Then, a decision to pitch to the Brewers' #8 hitter rather than the pitcher, with a runner on third, led to Milwaukee's second run. And finally, with a base open, Ian Kennedy and Kirk Gibson agreed to pitch to Prince Fielder: a two-run homer resulted.

But is it as simple as that?

One important thing you need to appreciate about coaching and managerial decisions like this, is that they are very easily judged in hindsight - but even if the outcome isn't what's hoped for, that doesn't necessarily make the original choice incorrect. To draw a parallel, in blackjack, you should stand if you have a total of 17. Even if the next card is a three, and the dealer gets 19, so you lose, that doesn't change the basic accuracy of the original tactic. The next time you get 17, you should still stand. Let's take a look at the three game-changing moments in Game One.

In the first inning, the Diamondbacks added to their major-league leading total of outs on the base-paths, when Bloomquist became the fourteenth Arizona runner of the season thrown out at home-plate. However, it's worth pointing out that it was the same aggressive base-running which has got Bloomquist into scoring position to begin with, as he stole second-base after leading the game off with a single. As Kirk Gibson prophetically said before the game, "If you want them to be aggressive and push the envelope, you can't have a negative comment to them for doing what you ask them to do. That's part of it. You're going to run into outs."

That said, this was still an over-aggressive decision, given the ball was very hard-hit, and left-fielder Ryan Braun had already picked the ball up well before Bloomquist had reached third-base. The following screen-shot shows exactly where Willie was when the Braunosaurus Rex picked up the ball. 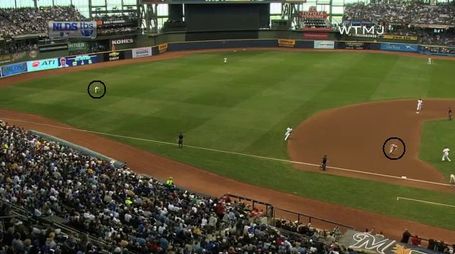 Braun's throw to the plate was highly accurate, but wasn't exactly what you'd call a Parrazooka, chugging its way through the infield like The Little Engine That Could. However it still succeeded in beating Bloomquist to the plate by a long way, as the screenshot below shows. As a result. Cardinals catcher Jonathan Lucroy had plenty of time to set-up and block home-plate. Actually, he probably had enough time also to go get a cup of coffee and a sandwich, come back, check home-plate remained thoroughly blocked, and still tag Bloomquist out. 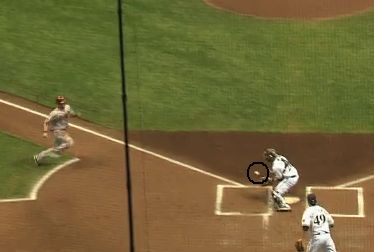 The second choice also involved the catcher at home-plate, except that this time, he was standing in the batter's box with a runner on third, no-one on first or second, and the pitcher on deck. However, instead of an intentional walk, Kennedy pitched to Lucroy, who dumped a two-strike offering into shallow left-field for an RBI single. Kennedy had not regrets, saying afterward, "I made my pitch and he just placed [it] just right. I mean, I got him 1-2, and there was no thought [of walking him intentionally]. Maybe if it was [to get to] a guy who couldn't hit, but Gallardo can swing it a little bit."

He's actually right about the last sentence. Analysis of the four-fingered tactic has shown "generally, an intentional walk is a poor strategy," unless the difference between the walkee and the next batter is significant. But here, Lucroy's career OPS is only .674, while Yovanni Gallardo is a fairly elite hitter for a pitcher. Over his five major-league seasons, he has a .218 average, with a .649 OPS, a mere 25 points worse than Lucroy. Additionally, it wasn't as if Kennedy served the catcher up with a fat meatball. The BrooksBaseball.net pitch f/X chart below shows, Lucroy got his hit on a pitch that was both up and in on him, the third such in the at-bat. 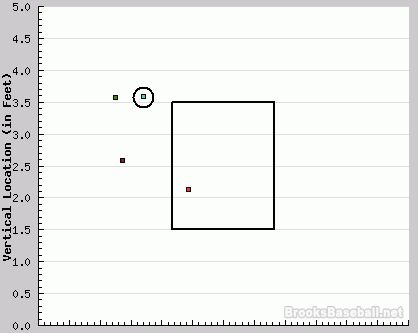 The final decision is the one I still do have some qualms about. Pitching to Prince Fielder with a base open in the seventh. According to our pitcher, he did talk to the manager: "It was a conversation. "(Gibson) said 'What do you want to do?' He set all the scenarios up. Obviously, I wanted to go after him. We talked about walking him. Obviously, I'm not going to do that. Maybe in another situation. I just hung that curve ball. I feel if I made my pitch there, it's either a rollover or he swings and misses it. I kind of brought it right down into his swing." Kirk's view? "It was my decision to let him do it that way. It didn't work out. He threw probably the worst pitch of the game."

However, Fielder's career line against lefties is .257/.340/.458, an OPS about 190 points less than he has vs. RHP. Basically, this is exactly the situation for which you have a LOOGY - if you're not going to use Joe Paterson in that at-bat, when are you going to use him at all? Even if Kennedy had got the final out in the seventh, it's not as if Ian would have been going out there for the eighth, not with his pitch-count almost at 110, the Diamondbacks down by two runs, and with Kennedy's spot also due up third in our half of the inning.

It's also worth noting how Paterson had dealt with Fielder previously. The two has faced off a total four times when we met Milwaukee in the regular season. Though the Prince got a single off him the first time, the following three battles resulted in a trio of swinging strikeouts by Fielder - on four, three and three pitches respectively. Here's the video of their last battle, when the two met on July 21. Watch it: then tell me why you would not want Paterson facing him again.

To conclude, while the coaching decisions certainly didn't help, a bigger problem was likely Arizona's lack of offense overall. You won't win many games scoring one run, especially in the post-season. Since the Diamondbacks came into being, teams are 6-99 in the playoffs when doing that. If the bats don't come alive considerably better this afternoon, against Zack Greinke, the odds are that we will be coming back to Chase Field 2-0 down, and with a mountain to climb.