Share All sharing options for: Duel of the Diamondbacks First Round - '05 vs '08

Welcome one in all to the Snake Showcase! Every Wednesday I'll be bring you a new series between two Diamondbacks seasons, culminating in the Grand Finale between the top two teams in each bracket.

I set up a 14 team seeded bracket that includes every D'backs team, from the Inaugural 98 team, to Gibby's gritty NL West champs this year. I will be simulating the games on WhatIfSports.com 'SimMatchup' feature, and be adjusting the line-ups for every opposing pitcher, as well as realistically adjusting the rotation. I'll also be simming the game 5 times to gain a bit of an average (but not enough to spoil upsets). The Tourney will start out best of five (with home field adv. going 2-2-1) and the rest will be best of seven (2-3-2).

More details and recap of Series 1 after the Jump

So the bracket is set up like so: (in bracket is team's seed, followed by their wins) 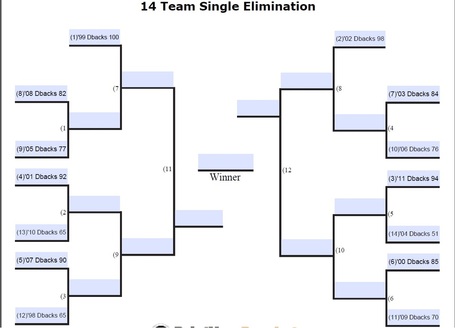 The top two teams, as you can see, have a bye past the First Round (which is ironic, both teams were eliminated in the NLDS) The team on the top will be home, so if any team upsets a higher seed, they will gain their home field advantage in any additional series. The First Series features the 9th ranked 2005 Backman's Boys One-Year-Dbacks at the 8th ranked Anniversary 2008 Diamondbacks.

The 2005 Diamondbacks were a team coming off a horrendous season. The team was in a terrible way and had to restructure not only the line-up, but the ownership and front desk as well. Deals in the off-season included signing 3B Troy Glaus, P Russ Ortiz, SS Royce Clayton, 2B Craig Counsell, a trade which dealt Randy Johnson to NY netting Javier Vázquez, Brad Halsey, and Shawn Green, and a trade sending Casey Fossum to Tampa for Jose Cruz Jr. They wound up being injury-prone and finishing 77 and 85, which actually was good enough to place 2nd in a terrible year for the NL West.

The 2008 Dbacks came into the season on a contrarily different note. The 2007 Baby Backs won the West and finished the season with no NL team boasting a better record. They also flew out of the gate, going 20 and 8 to start the season. Skipping the depressing details of injurys to the likes of Byrnes, Hudson, Davis (although cancer isn't really an 'injury') the Dbacks were barely staying afloat in a bad NL West. Their season ended Sept. 25th with a 12 - 3 loss to the Cardinals, eeking out a winning season at 82 and 80.

With 2008's advantage in pitching, I predict a short series for the '05 Snakes. Game time

Series 1 05 at 08 Game 1: The last season of Webb takes on Forgotten D'back Vazquez

Webb takes the rubber, and immediately finds himself in trouble. After Counsell flies out, back-to-back hits by Royce Clayton and Luis Gonzalez puts runners on the corners. Troy Glaus hits into what should be an inning-ending double play, but Glaus beats the throw to bring Clayton home 1-0. 2005 would scratch another run in the Top 2nd on a Vazquez single that scores Chad Tracy.

In the Bottom 3rd, '08 Dbacks already have 4 K's and only 1 hit off J.V. They would strike this inning, starting with an Augie Ojeda infield single (my Augie bobblehead nods in approval). A sacrifice, Wild Pitch, K, and walk to Young brings Conor Jackson to drive in a run by way of single to Left Center. Adam Dunn would tie the game immediately afterwards with a double that scores Young. They are unable to take the lead, as Tracy strands two with a ground-out.

Tied at 2, the teams trade zeros for the next three innings, but not without Webb getting into trouble. Webb allows a hit and a walk before K'ing Vazquez in the 4th, and in the 6th he walks 2, Strikes out 2, and allows a Terrero single before he forces pinch-hitter Tony Clark to ground-out, leaving the bases loaded. Javy Vazquez's final line: ND 5IP 5H 2 ER 1BB 1SO Pitch Count: 67.

The '05 team would break the tie in the 7th on a Gonzo solo HR, then Glaus singles afterwards which knocks Webb from the game. Webby's line: 6.2IP 8H 3ER 3BB 6SO Pitch Count: 107

Up 3 to 2, '05 Melvin brings in Bruney to pitch the Bottom 8th. The lead will now naturally evaporate from this poor decision. On just 7 pitches he blows the game; Drew singles and Chris Young hits a bomb to LF that gives the '08 D'backs a 4-3 lead. Greg Aquino comes in to attempt to hold it there, but in his 15 pitches he gets 2 outs in exchange for a Dunn HR to Center.

With a 2 run cushion and three outs to get, Lyon comes in and, besides allowing a single to Gonzo, shuts the door sealing the victory for 2008.

Both teams trade rallys and LOBs till the Top 3rd. After a Gonzo walk, Glaus homers to CF which give '05 another early lead. That's all they could muster against Haren in 6 innings, as Haren K's 11 while allowing 7 hits, 3BBs and 2 runs on 110 pitches.

But that might be all they need. Webb is pitching a solid game, with the first blemish by another Chris Young HR in the 5th. But the '05 Dbacks hold the lead 2-1 after 6.

Haren's exit from the game in the 7th prompts the '05 team to add more. Slaten comes in and after retiring the lefty Gonzo, gives up a double and a walk. Cruz, the winner from the previous night, shows why he earned the W serves up a Double to Tracy that clears Glaus and Shawn Green from the bases. 4-1 to '05

With Webb pitching strong and under 100 pitches, Melvin keeps him in for the 7th. Webb would fail to get another out: Ojeda, Upton, Drew all single to load the bases. Young continues with another single that scores Ojeda and keeps the bases juiced. Lance Cormier, off a good outing the day before, retires Jackson before walking in a run. He gets Tracy to fly out to shallow RF for the 2nd out to attempt to hold the lead. '08 Mark Reynolds makes that an impossibility; His double clears the bases, giving the 2008 another late game comeback. 4-6

Gonzo nearly ties the game next half inning, but the LCF gap holds it in the park and Young makes a running grab. Again Lyon comes in for the 9th, allows a 1-out single, then closes the door to put the 2005 Dbacks on the brink of being the first team eliminated.

Series goes to to Bank One Ballpark three years into the Past. Details for Game 2 here

Series 1 08 at 05 Game 3: Leftys square off as the Big Unit looks to clinch against Halsey and the '05 team

Things would start to look bleak for the 'home team', as the game would get out of hand early. Halsey gives HRs up to both Drew and Upton in the first, then, with the score 3-1, he falls apart in the 2nd throwing 2 wild pitches, 2 singles and 2 doubles while giving up 5 runs. He's left in to finish the inning and gets through the 3rd before being replaced by Mike Koplove.

Johnson, on the other hand, is pitching as effective as his late-career can get. In the first he gives up a Counsell single, Snyder falls asleep as Counsell steals both second and third, and Glaus scores him with a Texas Leaguer to Left. He later K's Glaus to end the 3rd leaving runners on the corners and keep the '05 team down 7

They would trim the lead to 6 with a Counsell sacrifice, while Koplove, Brandon Medders, and Mike Gosling throw 4 innings of 2H shut-out ball to keep the '05 team within their slim rally distance. The '05 team can't capitalize on a 6th inning double by Tracy, and their offense begins to fall apart, going 1-2-3 in RJs last inning.

The '08 Dbacks add 2 solo HRs in the next half inning off Greg Aquino to truly put the game out of reach. The demoralized offense cant get anything started, capitulating the game and series quietly to Leo Rosales 1-2-3 in the ninth.

Details on the Finale here

Interesting series, I'll let Thread comments discuss in-depth performances, but at first glance, I was impressed by '08 Stephen Drew, he performed lead-off rather well, by going 8-for-14, with 4 runs scored and 2RBIs. I would also nominate Chad Tracy, until I realized his '05 and '08 stats need to be separated. Chris Young came up big as well, going 6-for-13 with 2 HRs, 2 doubles, 5RBIs and scoring 6 Runs. But if I could split the trophy into thirds, all three starting pitchers for '08 would get a slice. Combined their line was: 19.2 Innings, 20 hits, 7 earned runs, 7 walks, 23 strike outs. The 2005 lineup is far from a true threat, and we'll see how they'll perform against the '99 team, but they were able to work through jams and eat innings till the offense provided run support.

Series 1 goes to the (8)2008 Arizona Diamondbacks, where they will go on the Road (9 years in the past, i might add) to take on the Number 1 ranked '99 Centurions in the Western Bracket Semi-finals.

Looking ahead to next week, Series 2 features the (13)2010 Trainwreck-bullpen Diamondbacks at the #4 ranked World Champion 2001 Diamondbacks. First three pitching matchups will be IPK vs Schilling| Hudson vs Johnson| Enright vs Brian Anderson|. Mouthwatering! To make things a little more interesting, we'll have a competition:

2 points if you can guess the correct series outcome.

3 if you can guess the MVP (winning team)

5 points for each person who gets the closest guess on total runs of each team for games 1, 2 and 3

Winner may get something, if at least bragging rights comparable to 'Pit your Wits. I'll take entries till Tuesday Oct 25th at 7pm AZ time. If you would like to suggest anything I do for the upcoming weeks by all means post it. Also if I made errors, point them out so I may correct them promptly. I'll make sure to work on and sharpen my writing style by every week as well, so criticism is appreciated. Thanks for reading!