Share All sharing options for: Diamondbacks Thing of the Week: 2011 Team Signed Baseball 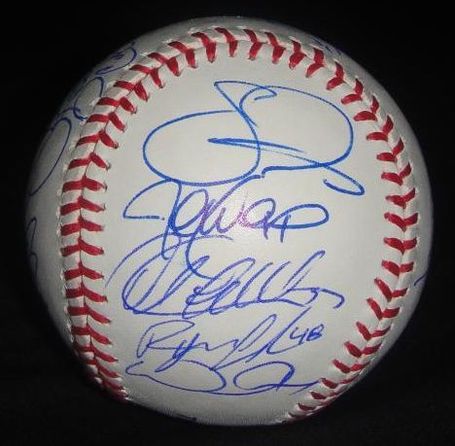 I am tempted to give this one to the brave soul still selling tickets for the NLCS at Chase. Wonder how that auction will turn out, especially since it's for the fourth home game - apparently taking place on Monday here in Arizona. Or maybe the slightly more realistic 2011 phantom World Series tickets - we've covered that phenomena previously in this section. But what I wanted was something which would be a fitting epitaph to the 2011 season - something commemorating not just one player, because the spirit of the roster has been one of its defining qualities. Thus:

This auction is for an autographed MLB authentic signed baseball by members of the 2011 Arizona Diamondbacks. The Diamondbacks are the 2011 NL West Champions and World Series contenders. All signatures were obtained personally while the Diamondbacks were in town to play the Padres. Also included is a display homeplate for the ball.

It appears these were collected over the course of the season. Goldschmidt's only appearance at Petco was in mid-September, by which point the likes of Juan Gutierrez were lost in the mists of faded memory (and Tommy John surgery). Bit of a random selection, which would make sense given the apparent provenance. Speaking of which, "INCLUDED IS A UNIQUE CERTIFICATE OF AUTHENTICITY FROM THE REAL DEAL AUTOGRAPHS AND HOLOGRAMMED TAMPER PROOF STICKER!!." Yep. A certificate of authenticity from the guy selling it to you, and a hologram sticker proving that, yes, this is an actual baseball. I feel so much more secure now.

However, they do also include a collage of photos depicting the D-backs singing, albeit so heavily watermarked, it's almost impossible to tell who is who, or what they are signing. One wonders quite what this proves: seeing player X signing object Y, doesn't prove anything about a possible object  Z. [I watch CSI: I know all about chains of custofy and evidence...] I'm also a little bit curious about where these autographs were obtained: I'm not that familiar with San Diego, having only been there once, but if I'd to guess, I'd say this looks more likely to be outside the team hotel than at Petco Park?

I must confess, I'm not exactly an autograph hound. It's a usually illegible scribble on something, and the something usually has low intrinsic value or interest, e.g. paper, a trading card or a baseball. I can see the point if it's on something significant like a game-used bat, perhaps; or if you actually obtained the autograph yourself, directly from the player, which would give it a certain emotional resonance. The concept, however, of buying that resonance second-hand or further removed, largely escapes me. However, if you don't mind that, then getting 17 signatures for the current price of $79.99 [with free shipping] seems pretty good value.