Share All sharing options for: Diamondbacks 1, Brewers 4: O Offense, Where Art Thou?

In Arizona's first playoff appearance since 2007, the Diamondbacks failed to get into an offensive groove after a terrible baserunning miscue some Dbacks baseball in the first, while Yovani Gallardo shut down nearly everyone that walked up to the plate. It's certainly not how I envisioned Game One going (though, at least we aren't the Rangers), but, alas, this isn't football, so we've got a few games to spare. Plus, our team's shown in the past that they enjoy putting themselves in terrible positions before pulling out the awesome. With the loss, though, we're given much less slack and have to really bring it to Milwaukee tomorrow. Hit the jump for the details, or pretend that the first game of the series is tomorrow. Your choice.

The game both "started out" very well and started out abysmally. The first pitch of the game from Yovani Gallardo was a 92-mph fastball knocked into center by Willie Bloomquist (who, yes, finds himself leading off in a playoff series). After an Aaron Hill pop-up, Willie B. swiped second, putting a man in scoring position with just one down. Then, things went sour. Justin Upton singled one to left, Home of the Ryan Braun, and for some reason that I'm still trying to fathom, Matt Williams sent Bloomquist home. Needless to say, Willie was thrown out by roughly a mile. Upton didn't even advance on the throw; it was an all-around terrible decision that gave us a man on first with two down instead of runners at the corners with one. Although the concept of "momentum" is probably debatable, any amount of it we'd built up was instantly removed when Bloomquist was waved home. Miguel Montero then grounded out to begin his 0-4 day, and that was the first.

Fortunately, we had Ian Kennedy on the mound, who didn't struggle all that much his first time through Milwaukee's lineup. After three, Ian only had a hit and a walk on his line, keeping the Brewers from scoring to help out the stagnant offense. The fourth, however, did not prove as easy: three batters in, Kennedy had put himself into a bases-loaded, no-out situation in a tie game. It's worth mentioning here, by the way, that the strike zone was pretty erratic and terrible. It fluctuated throughout the game, with a lot of outside pitches being called strikes and a lot of strikes being called outside later on. This won't be one of those "THE REFS COST US TEH GAME" comments, though. It just sorta sucks when the human element can cause so much... unpredictability. Anyway, Jerry Hairston, Jr. sacrificed to center to score Braun from third, giving Milwaukee the first run of the game. Kennedy got out of it, though, getting both Yuniesky Betancourt and Jonathan Lucroy to ground out to end the inning.

I wish this were the part of the recap that I could say "after being shut down by Gallardo for five innings, the Diamondbacks found their stroke and showed their mettle on a grand sate". It's not. Arizona managed just a single and a walk until the eighth. I mean, Willie Bloomquist hit the single. Seriously. Bloomquist aside, the team managed just two hits in the game's entirety. Gallardo's good, but it's worrisome regardless when he strikes your team out nine times. It really doesn't matter how great your staff is when the offense struggles so mightily, especially with the screw-ups on the base paths. We were put in a bigger hole when Yuniesky Betancourt tripled in the sixth, later scoring on a single from Lucroy. The ball took a really funky bounce in left and Parra seemed to have an issue finding it in the air on the hop, which probably contributed. But, still. Yuniesky Betancourt. At this point, it was 2-0 Brewers in the sixth. Come on, offense.

I think we were all waiting for some late-game heroics, but the situation turned even more dire in the seventh. Kennedy entered the seventh having thrown 94 pitches, quickly retiring both Cory Hart and Nyjer Morgan to bring up the terrifying 1-2 punch of Ryan Braun and Prince Fielder. Braun doubled, and at that point, Kennedy probably should have been removed from the game (or after walking Fielder). Gibby chose the worst possible option, keeping Ian in and facing Fielder. Anyone wanna take a guess as to what happened? Fielder smashed a ball into the right-field bleachers, giving Milwaukee a 4-0 lead and taking any winds that were remaining in Arizona's sails. I'm not even sure I can use that idiom like that, but I'm going to because I'm sad.

After that, the game was pretty much over. Ryan Roberts led off the eighth with a home run, which was nice, but it accounted for all of our runs on the day. Brad Ziegler and Bryan Shaw managed to pitch two innings while only surrendering a walk, but that's about all on the "positive late-game events" list today. John Axford was brought on to close it out for the Crew, and we went quietly, 1-2-3. Let's just hope that it was a fluke that the offense was terrible. Had we chosen to pitch to Weeks in the seventh, maybe we get him out and the score's 2-0. Maybe we score that run in the first, and we're looking at a 2-1 game in the eighth. Maybe, maybe, maybe. Maybe we'll right the ship tomorrow. Maybe. 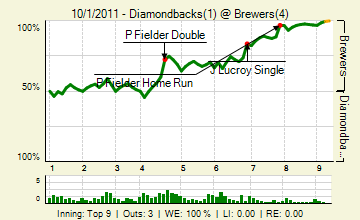 Comment of the Day, of course, goes to Zavada's Moustache, who gets the title any time he chooses to write out a new conversation:

Before the fourth inning:

Alright. Losing one game happens to nearly any team that doesn't completely outclass their opponent. Lose two, however, and your back's very much against the wall. I don't wanna be the guy that says tomorrow's a "must-win", but I'll be the guy that says the series will be a hell of a lot easier if we do. Dan Hudson toes off against Zack Greinke tomorrow at 2:07 MST. C'mon, Diamondbacks. Show the nation why we're here.