Lies, Damn Lies, and Statistics - What "Scorecasting" can teach us about sports

Share All sharing options for: Lies, Damn Lies, and Statistics - What "Scorecasting" can teach us about sports 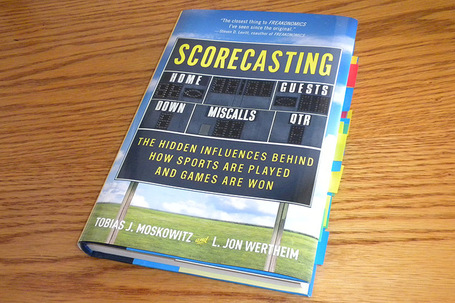 In the summer of 1984, two Jewish boys met at summer camp and bonded over a love of sports. Today, we get to read the result of that love of sport plus many years of higher education in psychology and economics, as Tobias Moskowitz and L. Jon Wertheim combine their knowledge to write Scorecasting: The Hidden Influences Behind How Sports Are Played and Games Are Won. Moskowitz and Wertheim have written this book to challenge assumptions and conventional wisdom in sports and analyze these concepts with statistics, economics, and psychology.

Mozkowitz and Wertheim tackle such ideas as, does icing a kicker really work? Does defense really win championships? What’s driving home field advantage? Are the Chicago Cubs truly cursed? Sports are examined with an eye on the psychology of the situation, particularly when discussing the role of officials. Scorecasting examines these themes and many more that are present in most major sports in the world. Sometimes the claims they make are supported by the statistical evidence; sometimes, refuted, and sometimes they prove indifferent. Either way the cards fall, they fall in an order backed by statistical research, yet reported in a way that the everyday sports fan can understand.

People in all aspects of life consider acts of omission far less harmful than acts of commission. Doctors subscribe to the principle of, "Do no harm"; stockbrokers are more likely to be in trouble when losing money on a bad choice than on missing out on a good choice. The same thing applies to officials in sports. Incorrect non-calls are considered worse than incorrect calls – officials in football and basketball would rather let the play continue than insert themselves into the game incorrectly. This applies to baseball umpires particularly on ball-strike calls. Everybody suspects that the strike zone shrinks when there are two strikes on a batter and expands when there are three balls. To prove this, using MLB.com Pitch f/x data with some adjustments, Moskowitz and Wertheim provide diagrams that show the size of the strike zone (calculated for individuals, then averaged out for graphical purposes) on a 3-0 count is 188 square inches larger than the size of the strike zone on an 0-2 count! Rather than issue a strikeout or a walk, home plate umpires will let prolong the at-bat and let the game be decided by the players. This is well-known among baseball umpires, and is also covered in the book As They See 'Em by Bruce Weber. The omission bias theory supports this activity. When the count is 3-0, not calling a strike is not a big deal, the at-bat continues; but, on an 0-2 count, calling a strike would have a larger influence on the game.

One thing Diamondbacks fans have experienced a lot in recent years is losing close games and losing late games. We know how much worse it feels to lose a game in the 9th inning than it does to be down from the 2nd inning on. "Loss aversion" is why managers use their closers in the 8th or 9th innings, rather than in the 6th when the situation might be the toughest of the game. Managers are more afraid of losing the win late, and so are GMs, owners, and fans, because we feel we deserve the win at that point (a related theory called the "endowment effect"). Loss aversion works the same for pitchers and hitters, too. A pitcher and batter both behave differently if the count started out as 3-0 or 0-2 and culminated in a 3-2 count. Each one goes from a positive – "I could get a walk" the batter thinks, and "I could strike this guy out" the pitcher thinks – to a negative situation, "Oh no I might walk this guy" and "Uh oh I might strike out now." Do athletes really act differently based on how they got there? The answer is yes. The authors looked at all the Pitch f/x data and parsed out full counts and from whence they started. A pitcher facing the possibility of a loss (having gone from 0-2 to 3-2) will throw more aggressive pitches than one who feels less urgency because he was initially behind in the count. As expected, the opposite was proven true for batters. A batter was more conservative had he started out 0-2, and was more aggressive had he started with a 3-0 count. In a vacuum, pitchers and batters should behave the same in a situation regardless of how they get there, but emotions and psychology play their role in sports here.

Home field advantage exists in every sport. The top playoff teams in football get a week off and to play in their home field; in baseball, the "This Time It Counts" summer classic has determined home field location in the World Series. But is there really a competitive advantage to playing at home? According to the tall table on page 112, it certainly does. Moskowitz and Wertheim looked at the win-loss records of every major team sport, and even some minor ones, and found that, overall, the home teams always won more games than the visiting teams. The percentage is largest in Major League Soccer – 69.1% of the time, the home team wins – and other soccer leagues world wide, and smallest in Major League Baseball (53.9%) and Nippon (Japanese) baseball (53.6%). But where does this difference come from?? The four conventional schools of thought are: crowd support, rigors of travel, scheduling, and home field characteristics. The authors were able to dispute almost every single one of these aspects using statistics, some of which may not be all-encompassing, but they certainly tried very hard to normalize the situational data.

For example, how can you tell how crowd noise affects a pitcher? Luckily, Pitch f/x data provides so much information that they compared the quality of pitches (velocity, movement, and placement) in home and away parks, and there was no discernable difference. For batters, they examined situational hitting – how much better is someone at hitting a particular fastball on a particular count, such as 0-2, where the crowd noise would be a factor? Again, there's little to no difference. Travel and scheduling in baseball plays a very small role because teams play multiple games at a time; even when studying cross-town rivals (San Francisco/Oakland, Chicago, New York), where travel really wouldn't be a factor, the home field advantage still existed. Quirks of home field parks do have some affect in baseball, but not in football, basketball or hockey where all fields are regulated. Interestingly, though, the authors also compared "hitters' parks" and "pitchers' parks." Assuming teams are built to their home field's characteristics, home teams from hitter-friendly parks should be out-hitting their opponents more than home teams from pitcher-friendly parks – right? (I know, it's a little confusing.) But no, home teams out-hit their opponent (AVG, SLG, doubles, home runs) by the same amount regardless of whether the team is in a hitter-friendly park or a pitcher-friendly park.

So with those four theories of home field advantage discarded, what can account for the difference in winning percentage? It all goes back to the role of officials. The book devotes a whole chapter to proving that the "officials bias" for the home team is the single largest contributing factor to home field advantage. Moskowitz and Wertheim know this claim is going to rile some feathers (and perhaps even cause officials to take a closer look at their actions), so they take great care in pulling out aspects of officiating that can be examined mathematically and they prove that calls change based on the crowd for the home team. In soccer, the main indicators of this bias were in red and yellow cards, fouls, and injury time. But in 2007, when 21 soccer games in Italy were played before no crowd at all due to rioting, all the discrepancies disappeared. For baseball, the umpire's discretion comes into play when awarding walks and calling strikeouts. Home teams are given extra walks and strike out fewer times, especially in high-leverage situations. And as Curt Schilling had suspected, QuesTek also played a role the performance of umpires in those home parks. The role of officials is addressed in-depth for all five major American sports, and is quite an interesting read.

More than that, the whole book is an interesting read. There's no way to even touch on all the baseball-related themes of sports that the book covers, let alone the similar themes addressed in football, basketball, hockey, soccer, and golf. As you can tell by the colored tabs I marked in the book as I read it for this review, there's a lot of meat here. It's written well, and most of the ideas raised are answered and supported by their very in-depth research methods. (As you read it, realize that there's no easy way to access detailed football and basketball data as there is like Pitch f/x in baseball.) I mentioned a few additional topics earlier; others include going for it on 4th down, the role of the superstar in basketball, the myth of the hot hand and streaks, evaluating draft picks, the steroid era and the Mitchell report, and why the Chicago Cubs keep losing. (Hint: They're just bad.)

If you're only a baseball fan, this book has plenty to keep you interested, but it will be much more enthralling if you're someone who knows about football and basketball too. (Personally, I'm not a basketball fan, but I had fun reading about it.) The book refutes some conspiracy theories, supports others, and may even start a few new ones. I highly recommend this book, because all sports fans may gain a few insights into how – and why – things play out the way they do.

Answer to poll question: E. Edited to explain the answer.

We looked at MLB hitters over the last decade and tried predicting the outcome of their next at-bats by using each of the five choices above. It turns out that (A) is the worst predictor. Why? Because it has the smallest sample size. ..... The best answer was (E), the choice with the largest sample size.

Now, it is true that a 5-game hitting streak will raise a player's career numbers, so it does increase his odds in a minuscule way, little by little. But the best predictor - the best number that represents a hitter's ability to get a hit - remains that with the largest sample size. Teams, players and fans are all swayed by the idea of streaks and momentum. Everybody will go through hot and cold streaks, and players' - and fans' - mentality changes during these days because they believe in it. But the statistical probability of a future event based on previous events cannot be proven, just like the flipping of a coin to be heads five times in a row does not make it more likely that the next one will be heads.