Since 1999, only one position player - Albert Pujols - has made more All-Star Game appearances for the National League than the five by Diamondbacks' legend Luis Gonzalez. And he didn't disgrace himself there either, going 4-for-7 with two doubles in total, to go alongside his victory in the 2001 Home-Run Derby - a year in which it seemed everything he hit left the park [except for the bloopiest of November bloop singles...] So, who better than Gonzalez to be officially appointed MLB's ambassador for the 2011 All-Star Game? Which of course, is happening in and around Chase Field, along with all the other events and festivities, from July 10-12.

We got the chance to sit down and chat to Luis, not only about his new position and the 2011 All-Star Game, but what it was like to take part as a player, his career with the Diamondbacks, the 2001 World Series, and what life is like for him after baseball. Part one, discussing the All-Star Game is after the jump, part two will follow on Saturday.

AZ SnakePit: So, you're now the official ambassador for the All-Star game...

AZSP: What are Phoenix's strengths as a host city for the event?

AZSP: I was thinking the tagline might have to be: "Phoenix in July - come enjoy our frosty a/c"

LG: I know we've talked about having a lot of shaded accommodation. I'm sure there's going to be plenty of water stations for the people that aren't accustomed to this, like we are living here. But it's unique: unlike the All-Star Game, where a lot of the tickets go to corporate people, this MLB All-Star Game gives fans here, locally, a chance to come to the game and experience this, whether it's with their grandparents, their parents, their kids, whatever. It can be a family event, to come out and enjoy this.

AZSP: It's not just the All-Star Game, though that's the core of it. Tell me about some of the other events; which ones are you looking forward to?

LG:  We'll have the All-Star Game, and the Gatorade All-Star Workout Day, which is the day before, with the Home-Run Derby. The Taco Bell All-Star Sunday is going to have the Futures Game, the Legends and Celebrity Softball Game, for which we're in a great location. We're so close to LA and all these major cities, that hopefully stars and celebrities will want to come out here, and be a part of it. It'll be exciting for the people here to have a lot of celebrity sightings around town. The Fan Fest is going to be really fun. There's a lot of Hall of Famers that live here in the valley, and it's also an opportunity for the fans to do things, interactive stuff for kids and adults to do, and experience some of what it's like to be a major-leaguer.

AZSP: The next one might be a thorny question, but I think it's a legitimate one. What would you say to the people who felt the All-Star Game should be taken away from Arizona because of SB-1070?

LG: Our organization never really took a stance. We stayed on neutral ground. We stayed away from political things like that. We just don't really get involved. At the same time, it's going to have a huge impact, financially, to our city. Here's an opportunity. Over $60 million in revenue is going to be generated here and it's going to create job opportunities for a lot of people, and be an economic plus, especially in this day and age. It would be a huge blow to our economy to lose out on all that. But we really haven't looked at it that way. We've looked straight forward, knowing that we have the All-Star Game coming and we're excited about it. That's been our focus since Day One.

AZSP: What's the experience of being an All-Star like for a player?

LG: You've been picked as one of the elite, for the first-half of the season. And to get chose to do that, and represent your team - it's exciting. Everybody's watching you, all over the country. All the best players for that first half are out there, teeing it up to see who wins home-field advantage for the World Series.

AZSP: Do you remember getting your first call-up, in 1999?

LG: It was after a game, they call you in and announced who the All-Star players are going to be for your team. It was my first All-Star game, so I was extremely excited. I had the opportunity to go with some of my team-mates, so it wasn't like I was going solo - there was about four of us that went together. I was so excited, like a kid in a candy-store!

All the All-Star Games were unique, you make a lot of friends, have a lot of lasting memories to enjoy, take a lot of pictures, and you enjoy it, because you don't know how many you're going to end up going to. That could be your only one, or it could be the first of many, because you've got to get out of the gates good and have a good year. Your main focus is trying to help your team win, but to get chosen as an All-Star, one of the elite players who gets to go to that game... 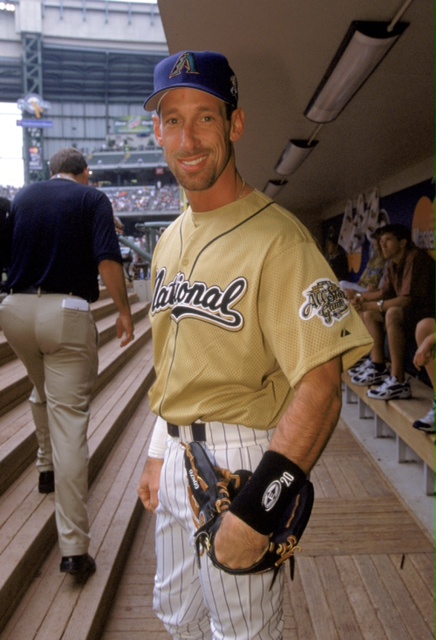 AZSP: You've made five All-Star appearances, so I just wanted to go through each one, and see what particular memories you had of them. First, 1999 in Boston: doubled off Mike Mussina, reached on an error of Jeff Zimmerman...

LG: That was fun for me. First All-Star Game, first time up, very nervous going up there. I doubled down the left-field line, in Fenway Park. Still remember Joe Black and Joe Garagiola Jr. sitting in the box-seats right by the on-deck circle, when I was going in as a pinch-hitter and walking up on deck. They looked at me and said, "Hey, go get 'em! You're gonna be alright." Getting a hit and knowing that those guys were right there, supporting me, kinda being in your hip-pocket, that was exciting.

AZSP: In 2001, you made it again, and faced two pitchers you'd see in the World Series, Roger Clemens and Andy Pettitte, and won the Home-Run Derby that year as well, so that must be a fairly special one in your memory.

LG: Yeah, it was. Not only that, but that was the first ever time I started in center-field - and I was lead-off!^ That was the game that Cal Ripken was playing third, and he and A-Rod switched positions right before my first at-bat of the game. I was also in the outfield when Cal hit that home-run off Chan-Ho Park. I got goosebumps, and I was on the other team. There were so many fun times, and you also sit around and try to pick the brains of the other guys on the team, see how they mentally and physically prepare for games, what their pre-game rituals are - it's pretty cool.

LG: And with most of our coaching staff. It was very interesting and put everyone in a unique situation. Now, they've expanded the rosters, because of that. I think the toughest job for [All-Star] managers is to try and get everyone in the game. You never want to leave anyone out, and I think [Bob] Brenly was trying to do it, as well as the manager on the other side. They were trying to get all the players in so they could experience that; it just so happened, the game got tied and we ended up running out of players. It didn't make for a very fun, fan-friendly ending, but at the same time, it created a lot of controversy, and changed the way the All-Star Game has been played from there on out.

AZSP: Now winning the game means something, determining home-field advantage for the World Series. You played on both sides of the rule change - do you think it was a positive thing?

LG: I think it was a positive, in that they added more players, so it gives more guys an opportunity to get to the All-Star Game. The only drawback is maybe the home-field advantage. I mean, McCann hit the home-run this year and the National League got the advantage, but you're counting on someone else to help. If you're the best team out there, you can win 130 games, and still not get home-field advantage, because the game is dictated by somebody else. You can only control what you do on the field, and if a team goes out and dominates all year, and still doesn't get home-field, it's kinda unfair - because that is decided by another game, that took place with 50 other guys on different times.

AZSP: In 2003, you went to Cellular Field in Chicago and singled off Mark Mulder...

AZSP: It can be much fun if you go and don't get a chance.

AZSP: Coming back to the 2011 game, which Diamondback do you think is most likely to represent the team on home-turf this year.

LG: I'm sure everybody's odds-on favorite is going to be Justin Upton, because he has the most potential out of everybody. But Kelly Johnson had a great season last year, hopefully he can continue to do what he has done, from last year to this. I know all those guys are going to be excited and gung-ho: you want to make that team, and be that guy representing your club because it's at home. When you get announced here as an All-Star in your own home ball-park, it's going to send chills up your spine. This is the first ever All-Star Game here in Arizona, and if you get an opportunity to play on that in your own home-park, it's pretty unique.

AZSP: You experienced something like that in 2005, when you went back to Detroit for the All-Star Game, which is where you were before coming to Arizona.

LG: That was a special All-Star Game for me because I had my son with me, and he went out with me for batting practice, Home-Run Derby, everything. He experienced a lot of that stuff with me, and that's where the kids were born, because I was playing with the Tigers. And having been traded from Detroit to Arizona, that was a lot of the media questions that I was asked when I got there, about being an old Tiger and coming back to Michigan to be a part of this. For me, it was very unique because my kids were born there. In the following off-season, I got traded Arizona, and found a home here - and this has been home ever since.

In the next part, we cover the rest of Luis's time with the Diamondbacks, including the 2001 World Series, and also discuss his approach to the game, fans and what he's been doing since leaving the field in 2008.

Notes
* - Three of the NL starters were from Arizona that year: Matt Williams, Jay Bell and Curt Schilling.
^ - Only four of Gonzo's 2,367 career regular-season starts came in center-field, all with the 1995 Cubs.