Another day, another sterling performance from Dan Hudson. Edwin Jackson may be tearing it up for the White Sox - undefeated in six starts, with a 2.05 ERA - but the pitcher we got back from them is proving possibly even better. After tonight, where he allowed one run over seven innings, Hudson has a 1.91 ERA in his first 56.2 innings for the Diamondbacks. And it's probably fair to say, Dan didn't even have his best stuff tonight, as he only struck out three San Francisco hitters and walked two - an Arizona low and tied for a high since coming to us, respectively. The offense wasn't up to much, but three runs proved enough to win - tonight, at least...

Last night, Barry Enright was victimized by the long ball, and it looked as if the same might be happening to Hudson this evening, as the second batter faced, light-hitting Freddy Sanchez, cranked an inside fastball down the line and into the home team's bullpen. However, Hudson seemed to do a better job of making adjustments to his game plan, and that was the only run he allowed; he seemed to be throwing more sliders this evening, and those darting down and away (from the right-handed batters), then allowed him to bust fastballs inside, resulting in some seriously-broken lumber and shallow pop-ups or weak grounders.

Hudson allowed four hits after the Sanchez home-run, all singles, and the Giants were hitless with runners in scoring position on the night. They only had such three at-bats against Hudson, with the biggest one perhaps the last, which was also the final batter he faced. The Giants had the tying run on third, and another man on first, with two outs in the seventh and a pinch-hitter up for Barry Zito. However, Hudson did it again, generating a weak groundball to Adam LaRoche at first. He finished with 101 pitches, five hits and one run - his first strike ratio, at 52%, was lower than usual (60%), another indication he wasn't truly on form.

Esmerling Vasquez allowed a two-out single in the eighth, but nothing came of it, and Juan Gutierrez led off the ninth with a double, but stranded the runner there. Would we feel comfortable going into 2011 with him as closer? It's beginning to look like he may be in that role for the team next season, and he has certainly pitched a lot better of late. His seasonal ERA is still high, especially for a closer, at 5.47. But we should consider that it was a great deal higher, peaking in double digits at the start of June. Over his last 30 innings of work, Gutierrez line has been:
Gutierrez: 30 IP, 25 H, 8 R, 8 ER, 9 BB, 20 K, 2.40 ERA
BABIP over that time is .256, which is a little low, but not awfully so.

On offense, we didn't do a great deal, but managed to tag Barry Zito with his 12th loss of the season: keep on making that bloated contract look even worse! [His record with SF is now 39-55 and a mediocre 4.46 ERA] We tied the game in the second, Miguel Montero bailing out Mark Reynolds with a two-out RBI, after the latter had grounded into a double-play. Arizona then took the lead on Kelly Johnson RBI single, driving in Drew, who had tripled - his tenth three-bagger of the season, which trails only the Rockies' Fowler. I was surprised to realize Drew is comfortably the franchise leader for these, having overtaken Tony Womack earlier this season.

He also drove in the Diamondbacks third and final run in the seventh, with another two-out single. Arizona managed only six hits all told, with Drew and Johnson getting a couple apiece. LaRoche picked up a pair of walks, while Montero and Gerardo Parra each had a hit and a walk. Mark Reynolds' return to the line-up, after missing a couple of games with thumb issues, wasn't very productive, as he went 0-for-4 with a pair of strikeouts, and his season average is back down to .209 now. 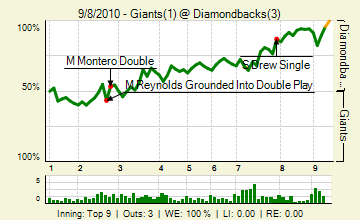 A light GDT, sixteen commenters getting just over 400 posts. justin1985 cracked three figures, with hotclaws in second, while xmet and soco shared third. Also taking part: Clefo, frubio, snakecharmer, Rockkstarr12, DbacksSkins, 4 Corners Fan, kishi, AJforAZ, soco, asteroid, dbacks4life, BattleMoses and Husk. A couple of very credible comments tonight to decide between, but in the end, I have to go with the poetic one:

in a limerick sort of mood

I wish we would just trade Upton
He has become a strikeout glutton
Manager Gibson is fiery
But playing with Byrnes’ dowry
Play Parra, he’s better at buntin’

Off-day tomorrow - always nice to pick up a victory before that. Please do check in however, as there'll be a piece on whether or not we should be looking to re-sign Webb or not...