Diamondbacks 3, Giants 6: Barry Meets His Waterloo - And It Is Open...

Share All sharing options for: Diamondbacks 3, Giants 6: Barry Meets His Waterloo - And It Is Open...

Back when he pitched for Arizona, Curt Schilling used to be strongly of the opinion that the roof should be closed when he was pitching, believing the ball flew further with it open. The most famous incident was Game 7 of the 2001 World Series, where MLB over-ruled Schilling, but given Curt allowed a league-leading 37 homers that season, 24 of them at Chase, he might have had a point. He was also, like Barry Enright, a fly-ball pitcher. I mention this, because the roof was open at Chase Field this evening, for the first time since June 12 - and Enright had the worst start of his young career, allowing six runs, five of them on a trio of long balls. Coincidence?

Certainly, the ball was flying off the Giants bats this evening The most notable occurrence was the fifth inning homer by Freddy Sanchez to right-field. Now, he's not exactly a power-hitter (42 lifetime HR), but it was the first time in his entire MLB career - tonight was his 826th game - that Sanchez had knocked a ball out of the park to the opposite-field. That was just one of seven extra-base hits Enright allowed this evening - SF seemed to be first-pitch swinging - giving up four doubles in addition to the three blasts, and his streak of starts to open his career, allowing three runs or less, ended at 13. He allowed six runs in six innings, on nine hits with no walks and one K.

Meanwhile, the Diamondbacks struggled to solve Tim Lincecum, despite this being the fourth time they'd faced him this season. He retired the first 13 batters he faced, before Miguel Montero laced a single to left, and that was the only base-runner we managed through the front six innings. The third time through the order, however, something seemed to click. Kelly Johnson led off with a triple, and Chris Young then deposited the ball into the bleachers for the 24th time this season, to make it 6-2 - that ended a 22-inning scoreless streak for AZ. Another Montero single was followed by an RBI triple from Tony Abreu, making the score 6-3, and ending Lincecum's night.

Cap'n Kirk pretty much wheeled out the B-bullpen for the Diamondbacks, with some names we haven't seen much of lately, for one reason or another. They pieced together three scoreless innings - in fact, they only allowed one base-runner in the last third of the game, a walk in the eighth. Sam Demel pitched a perfect seventh, and Carlos Rosa the eighth [he was the one who allowed the walk]. Leo Rosales threw one pitch, got the out, and was replaced by Mike Hampton, who retired the final two batters.

Unfortunately, the Diamondbacks fared little better against the Giants' pen, with just a single in the ninth - that made it a save situation, with the tying run on deck. However, Montero rapidly ended the game with a double-play, and Arizona dropped to their fourth straight loss. Miggy was the only player to get two hits, and the Diamondbacks struck out a dozen times without getting a single walk - the third time this season they have managed that feat. This one was over in a brisk 2:16 [which works for me, because nothing is worse than long, drawn-out loss], in front of a crowd just shy of 20,000 at Chase Field. Game temperature: 97 degrees. Yeah, the roof was open...

Before we get to the fangraph [I'm sure we can guess what it looks like], some other bits and pieces of news from the Twitterverse. Jack Magruder tweets that the MRI of Justin Upton's shoulder showed "nothing structural," just a left shoulder strain that apparently "dates to a 2006 spring training injury." Four years ago? Wow. Still, he's listed as day-to-day. Meanwhile Steve Gilbert chips in, "Gibson seemed to say that Parra reported a little too heavy this spring." Must have been that off-season training regime with Pablo Sandoval as his partner... 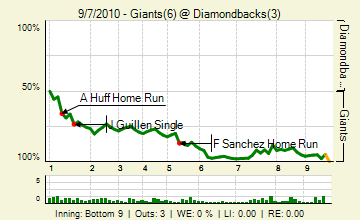 That is not a beard

That’s 5 whiskers that are shorter than my cat’s.

Oh, that's cool - looks like we can copy and paste comments in their entirety now... Anyway, we'll reconvene tomorrow and try to avoid the sweep at the hands of the Giants.