Ian Kennedy was magnificent, allowing only two singles and a couple of walks over eight shutout innings. Unfortunately, he was also the only Arizona batter to get an extra-base hit, and the teams traded zeroes through ten frames. With two outs in the eleventh, Aaron Heilman allowed three consecutive hits, including a two-RBI triple, and that proved the margin of victory for San Francisco, letting them close to within half a game of San Diego, who play a little later. It was the third consecutive defeat for the home team, so Tankapalooza will be returning, effective tomorrow.

This afternoon was the thirteenth time a Diamondbacks starter has allowed zero runs in a game this season. The team's record in such games? A feeble 7-6. Details after the jump.

Let's start with the "good", which would be the way Kennedy and Juan Gutierrez posted ten straight zeroes against the Giants offense. Thanks to a pick-off and a double-play off the bat of the Buffet Slayer, Kennedy faced two batters over the minimum, and threw first-pitch strikes to 21 of the 26 batters he faced. One Giant runner got past first base while Kennedy was operating. All thoughts he might be "wearing down" have been dispelled by the last three outings for IPK. They have seen him throw a total of 22 innings, and allow three earned runs on ten hits and six walks, while striking out 23 batters.

Unfortunately, there was very little cooking offensively for us. We got a man in scoring position in the first and sixth, but it was with two men already out, and Adam LaRoche ended the inning in both cases. Kelly Johnson had two hits and a walk, and Chris Young a hit and a walk. Otherwise, the concept of putting six left-handers in the line-up against a left-handed starter, worked about as well as you would expect. While some of that was injury-related, with Justin Upton and Mark Reynolds not being available and only as a PH respectively [as we'll see, the latter was questionable, at best], now the rosters have expanded, there's less excuse for it.

Arizona might have been screwed by the umpire in the seventh. Miguel Montero was leading off, and got hit on a 2-2 pitch. The umpire ruled he hadn't made any attempt to get out of the way - but the pitch was clearly out of the zone, and the rules state it should have been a ball. The next pitch would have been ball four, but Montero ended up striking out and instead of a leadoff walk, we went down tamely. It was something Mark Grace picked up on immediately, but it appears no-one in the Diamondbacks dugout was paying attention.

The eighth inning was, however, perhaps our best chance. Kennedy was left to hit for himself, which made sense, given he was only at 91 pitches. Our starter promptly crushed his first career extra-base hit, over the head of the Giants' center-fielder, and took third on a deep fly-ball off the bat of Stephen Drew. That got Bumgarner out of the game, and Ryan Church worked a walk, to put men on the corners with one out. But we couldn't deliver, Kelly Johnson whiffing - one of fourteen Arizona strikeouts on the day - and Chris Young grounded out. The D-backs were 0-for-7 with runners in scoring position.

The Giants had their own chance in the ninth, Gutierrez getting out of a first and third, one out jam. He got Huff to foul out, about three miles high, to LaRoche, and was then bailed out by a brilliant dive from Gerardo Parra in right, on a Texas leaguer that would otherwise have scored the go-ahead run. There were two more runners on base for San Francisco when we went into extra innings; Gutierrez got the first two batters without real trouble, but then hit the next, and was almost decapitated by a line-drive back up the box. He worked out of that jam too, getting a pinch-hitter to strike out, and keep us in the game.

In our half of the tenth, Parra walked to lead off the inning, and I'm not sure about Cap'n Kirk's game management the rest of the way. Mark Reynolds was initially in the on-deck circle, but was pulled back and replaced by Barry Enright, who couldn't get the sacrifice down and struck out bunting foul. Drew went down swinging, and Reynolds was then sent up to pinch-hit for Augie Ojeda. But his thumb was clearly still bothering him, especially when the Giants busted him with pitches inside, and Special K went over the top of a pitch as well.

That was our last chance: while we got a lead-off walk in the 11th, bringing the tying run to the plate, the next three hitters made outs. And that was the end of the game, because Heilman couldn't get the third out of the inning. The first couple of hits he allowed were perhaps somewhat fortunate bloops, but the third was definitely not, a pitch crushed to the wall in right center, bringing home both runners. Aaron has now been tagged with the loss for the Diamondbacks in four of his last ten appearances, allowing sixteen hits in ten innings, delivering a 9.90 ERA in that time, with opposing hitters batting .372. 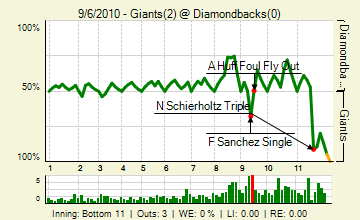 If the boy on first steals second...

will he be taking off in A. Huff?

Back to normal service tomorrow, with an evening game against these self-same Giants, who may (or may not) be tied for first-place by that point.