Diamondbacks 2, Astros 3: Live and Direct From...

Share All sharing options for: Diamondbacks 2, Astros 3: Live and Direct From...

A three-run homer was enough for the Astros this afternoon, overcoming solo shots by John Hester and Kelly Johnson for the Diamondbacks to take the series at Chase Field this afternoon. Rodrigo Lopez notched his 13th loss of the season, though settled down after the first and pitched six innings without further damage, after Houston opened the game by going walk, single, three-run homer Given that opening, I guess we should be relatively happy things didn't go downhill, but one-run losses count exactly the same in the standings as any other defeat.

After the jump, you'll find a blow-by-blow recounting of this afternoon's activity, penned as it unfolded, live from Socofest. No editing, proof-reading or fact-checking has taken place. All opinions expressed are those of the individual contributors and not necessarily those of the SnakePit. You have been warned...

First inning: emilylovesthedbacks. Well, I have to say, it's all Jim's fault. Okay, not really. We were watching a program on CSPAN from 2008, (TWO THOUSAND EIGHT) and flipped over just in time for first pitch. Walk, single, lots of jokes, and then WHAT THE F***ING F***, that was NOT funny. Not funny. Weird looking Hunter Pence with a homerun. ...and then Jim and the Mrs walked in. The bottom half of the inning was an amalgam of the first 130...something games of this season, except that Mark Reynolds didn't strike out, but only because we didn't manage to get to him.

Second inning: Jim McLennan. Not much actually happened in this inning, The Astros singled, while we went down in order. This lull gave us time to get settled in, our arrival at SocoFest having been delayed by a police "incident" on the way. Mrs. SnakePit was stopped for doing 83 mph; things were not helped by us high-fiving each other on being informed of the speed by the officer, or me asking him "Is it 'cos I is Hispanic?" Having peeled off the side of the road with a squeal of rubber, we arrived just in time to see Astros trotting home. However, I am pleased to report that the Arizona hot-dogs live up to their reputation.

Third Inning, the Exciting Inning!: Kishi At least, the most exciting inning so far. Things started out in the top of the inning well enough, with an easy fly out. Hunter Pence singled into center, and I'm sure many of us started to feel that nagging worry that we might be looking at another Astro outburst, but no fear! A battle ensued with Carlos Lee, and the Lantern triumphed, getting Lee swinging with Hester firing down to second to gun down Pence trying to steal for a strike 'em out, throw 'em out double play to end the inning. Fired up by his great defense, Hester triumphed in the bottom of the inning, too, taking a pitch from Bourn to deep left for a solo home run. However, the rest of the offense did naught, so we ended the inning down 3-1.

Fourth Inning: Mrs. Kishi Wee! A guest star re-capper! Blum was up first for the Astros and struckout. Sanchez then got a triple out to right field, which Parra missed catching and prompted Kishi to yell at the tv, 'Parra! Use the ears to coast!" Wallace and Castro grounded out, ending the top of the inning. Now to the player we care about: Chris Young was up first and struck out. Kelly Johnson then hit a home run to left field, Yay! Now we are only down 3-2. the home run also unfortunately hit a child in the stands.Ouch! Reynolds and LaRoche both grounded out to end the inning.

Fifth Inning: the OFFICIAL Mrs.Snakepit: I keep watching the at-bats and where they're landing so they don't hit the kid in left center who got hit by Kelly Johnson's home run, also wondering if he was going to keel over from an allergic reaction to the Snow Cone they gave him so he wouldn't sue. I'll continue with the medical updates on that child for this inning. Now he's getting a talking to by Derrick Hall and probably an autograph. No better than that, he got an autographed Kelly Johnson bat. Now we'll probably see a bunch of kids fall over to get their share. Nice to see John Hester pulling his weight at bat with the HR in and the walk in this inning and now the catcher tackle to try to get the guy to drop the ball. Youngblood should not have given the signal to Hester anyway, but it was a nice college try on his part to attempt to advance to home.

Sixth Inning: soco Okay can I just start and say that I'm never inviting anyone over ever again. I served Arizona style hot dogs, as I'm wont to do, and within a minutes two of the people, who won't be named, dropped a plate on the carpet. And then a whole liter of cola was dumped on the countertop and on the carpet. My copy of Amelia Gray's AM/PM, my Magic cards! Luckily, both messes were cleaned up rather quickly, and the game continued. Which brings us to the sixth. The Astros went down quietly in the top half of the inning, with a Captain Underpants strikeout, and LaRoche turning a nice double play. A grounder to LaRoche was converted into a pickle, and the advancing runner, Carlos Lee, was tagged out by Johnson. Unfortunately the Diamondbacks seemed to want their half of the inning to go just as quickly. Young flied out to left, and KJ was up. He managed to see a few pitches, but his efforts were ultimately fruitless as well, when he grounded out weakly to first. Oh hey! Derrick Hall is sitting next to Gonzo! Then, All You Can Eat Seats. Oh, baseball! Reynolds stepped up to the plate, strangling the neck of the bat, grinding it to dust. Would he tie the game, or strikeout? Would he be hero, or goat? (He was goat, striking out. What did you think was going to happen?)

Seventh Inning: BattleMoses Ok this inning starts off with unidentified Astro taking a walk and gibson pulling Green Lantern from the game which brings Carrasco in to pitch. Wallace grounds out to first and unidentified Astro advance to second. Then Juan Castro grounds out to first. J.A. Happ strikes out to end the half. To start off the inning Laroche grounds out to short then Rusty hits an infield single and Parra hits another single to put two on with one out and Hester strikes out swinging annnnnnd we strand the runners to end the inning ;-;.

Eight Inning: DbacksSkins pinch hitting for mrssoco Mrssoco was supposed to take the 8th, with me pitching the 9th, but she's off talking on the phone with jinnah, so I'm here. Member of the Gingerbullpen Blaine Boyer came in to pitch a quiet top of the 8th, including a bang-bang out of Hunter Pence at 1B despite a 3-ball count. Stephen Drew grounded out to lead off the bottom, but CY worked a walk to get on in front of Kelly Johnson, and stole 2B when Astros catcher Keppinger stood to throw and had the ball fly backwards towards the backstop. KJ was looking to follow up his home run, but, like most sequels, it sucked, and he instead grounded weakly up the middle, advancing CY to 3rd, but Mark Reynolds grounded out to end the inning, bringing satisfaction to AZCentral posters everywhere by not striking out. End of 8: Astros 3, Dbacks 2. 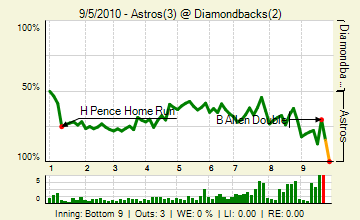 Just shy of 400 comments in the GDT, which given the absence of a number of the usual players, isn't bad: justin1985 and Rockstarr12 led the way, the only players with more than fifty; hotclaws was in third. Others present: Wailord, DbacksSkins, jinnah, soco, Jim McLennan, Clefo, snakecharmer, Jdub220, Jack Cromwell, NASCARbernet, unnamedDBacksfan, BattleMoses, kishi, asteroid, 4 Corners Fan, IHateSouthBend and Dallas D'Back Fan. Comment of the Thread (once I got past staring at the flying firefox pic), goes to NASGULber.. er, make that NASCARbarnet, for his identity crisis:

I’m not sure about it anymore (shakes head).

The Giants come to town tomorrow - 1:10pm first pitch, it being Labor Day. I'll get the Fantasy Baseball report up before that, all being well.