Share All sharing options for: Astros 3, Diamondbacks 4 - Small Ball For the Win

It's Not Involved In Any Postseason Race Weekend here at Chase Field, with the Astros in town to take on the Diamondbacks. The Astros recently swept the Phillies and have won 8 of their last 10, while the Diamondbacks just swept the Padres and won 6 of 7. It should make for an interesting weekend, and tonight did not disappoint.

Daniel Hudson - soon-to-be founding member of the new "Big 3" here in Arizona - pitched 6 strong innings. Though his team couldn't hold the lead for an individual win, a team win is just as important. Augie Ojeda's sacrifice fly in the 8th inning put the Diamondbacks ahead and the good version of Juan Gutierrez closed it out out with a save.

Details in the usual place....

The Diamondbacks jumped on the board early off of Brett Myers. Stephen Drew and Chris Young both got aboard and Adam LaRoche doubled to score Drew (and Young almost tried for home but was held up). With runners on 2nd and 3rd base and nobody out, the Dbacks...... utterly failed to do anything more, as three pop flies stranded both runners. "Here we go again" - one couldn't help but wonder if the wasted opportunities would come back to haunt them.

Dan Hudson handled the Astros well until the 4th inning, when he allowed back-to-back singles to open the frame, and Jeff Keppinger singled to bring in Angel Sanchez to tie the game. In the 5th inning, Gerardo Parra misplayed a ball in left to give the pitcher Myers a "double," and the Astros used fundamentals (groundout to move him over, single to score him) to take the lead 2-1.

But the Dbacks game right back in the bottom half. Parra made up for his play by tripling to lead it off. Hudson showed he's not quite as adept with the bat as his DH predecessor and K'd, but Drew walked, then Young brought in Parra and LaRoche singled in Drew, and just like that the Diamondbacks had the lead right back.

Wait, you mean teams aren't supposed to just give up once they get behind? Hey, I like this version!

Hudson was over 100 pitches after the 6th inning, so he was out, and Blaine Boyer came in for the 7th. He promptly gave up a ground rule double and a single, then got the double play - but, the two outs did NOT include one at home, so once again, Houston had tied the game. Two scoreless halves later, it was Ryan Roberts' turn to lead off with a double, and was moved over by Parra. Runner on third with one out in a tie game, another opportunity to wast-- hey! Look, it's Augie Ojeda off the bench to drive in the winning run with a sacrifice fly!! Perfect execution - "small ball" at its finest. Juan Gutierrez came in for the save and nailed down the win with very little apprehension. 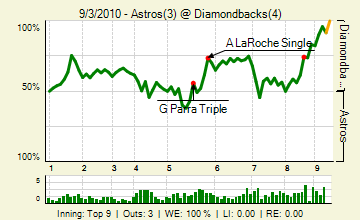 Over 500 comments is not a bad turnout for a Friday night. Apparently, 22 of us have no lives, says the man who led the thread with more than double his next nearest competitor. soco took first place, 'skins in second, and jinnah in third. All Present: BattleMoses, soco, DbacksSkins, Skii, pygalgia, kishi, Rockkstarr12, emilylovesthedbacks, jinnah, hotclaws, asteroid, snakecharmer, brian custer, NASCARbernet, Azreous, dbacks4life, Muu, Jim McLennan, Sprankton, justin1985, marionette, and Wailord.

Comment of the Day comes from a discussion of horrible beards and mustaches. (What baseball game?) After Phil posted a photo of himself, Emily decided his new nickname should be:

If you want a somewhat baseball-related comment, you'll have to go for soco talking about hotdogs.

Sounds like it's radio only tomorrow, for some other sport that seems to be occupying the minds and televisions of many Americans. Except for Jim's. In the evening start, Joe Saunders goes up against Bud Norris for Wailord's first recap as an official writer!