Diamondbacks 5, Astros 6: The fault, dear Brutus, was not in our starter

Share All sharing options for: Diamondbacks 5, Astros 6: The fault, dear Brutus, was not in our starter

Here’s a fun fact: entering today, the only NL teams that we had winning records against through four or more games would be the Mets (5-1) and the Astros (4-1).  Unfortunately, the standings aren’t dictated by winning percentage against those two, so it’s meaningless on that front. In a season like this, however, I think most of us threw out any standings-related hope a long while back - so, hey, may as well enjoy beating up on who we can, right? Joe Saunders thought so, anyway, as he pitched a sterling seven where Houston seemed to consistently play right into his hand. Oh, our bullpen is also awful and blew another game. Disheartening details after the jump.

The teams traded jabs in the first, with Houston getting on the board off of a Carlos Lee single and Arizona knotting it up on an Adam LaRoche RBI single in the bottom half. Despite the shaky start, Joe settled down, facing the minimum twelve over the next four innings. The Astros got on the board again in the sixth on an RBI groundout from Hunter Pence, yet Saunders seemed to have the game under control throughout his night. In case his nice start on the mound wasn't quite enough to satiate your burning need for "moar Joe", he also collected his first two major-league hits, his first career RBI, and his first career stolen base. No, seriously. Joe stole a base in the sixth, and one can only assume this is all due to Joe's uncanny "winningness". As Jim pointed out in the GDT, the stolen base marks just the fifth time in franchise history that a pitcher swiped a bag, the other three being Brian Anderson (twice), Jeff Suppan, and Shawn Estes. The more you know, right? Joe ended his night after seven innings and 92 pitches, giving up just three hits and two earned runs in the process.

Bud Norris, on the other hand, did not have as nice of a night, on any of the fronts. He remained a bit "off" after his 26-pitch first inning, though, whether it was a matter of him buckling down when he needed to or the Diamondbacks simply failing to get hits when they needed them, he continued through the next few inning unscathed. The 'backs did score on Joe Saunders first career hit, an RBI single scoring Montero from third, but left the bases loaded later in the inning on a Chris Young strikeout and Kelly Johnson groundout . A leadoff triple from Parra also went for naught in the fourth, and from there it looked as if we wouldn't score until someone took it upon themselves to launch one out of the park. In case you're not the best with foreshadowing, Ryan Roberts did just that in the fifth, launching his first homer of the season into left-field bleachers, putting the Snakes up 5-1, a four-run cushion that even the Diamondbacks bullpen couldn't relinquish.

Wait, who am I kidding? After a flyout to lead off the eighth, a triple, wild pitch, single, and double (all given up at the hands of Aaron Heilman) set the stage for Carlos Lee to absolutely crush one to left, putting the Astros up 6-5. Esmerling Vasquez came in and got a quick out to end the inning, but the (massive) damage had been done. The Diamondbacks went quietly in the eighth, and made their last stand in the ninth against former Diamondback Brandon Lyon. With two outs and Chris Young on third, Reynolds walked up representing the winning run, but a flyout put the final nail in the coffin of the winning streak, which was snapped at four, tying our season-best. Go no further than the Diamondbacks bullpen if you wish to see how quickly you can switch from one emotion the next... Mike Hampton also made his debut in Sedona Red in the ninth, inducing a groundout against the only batter he faced. Obviously, he's yet to have the talk of just how things are done in Arizona. 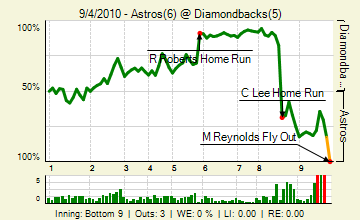 An awfully quiet GDT, with just 360ish comments, the quietest in the last few games. I'll just tell myself you guys counted on my recap, thus, no one bothered following the game. That, or it was the fact that the game wasn't televised. Pretty sure it was the first thing. Regardless, soco lead the way with 118, besting myself by almost twofold. Also joining the conversation: hotclaws, Jim McLennan, brian custer, kishi, Clefo, NASCARbernet, snakecharmer, TinySarabia, BattleMoses, justin1985, Azresous, piratedan7, jinnah, and 4 Corners Fan. Comment of the Night goes to Jim, as the new guy does everything he can to keep his job. Actually, it's really CotN because I'm not giving context. Have fun with it.

In line with the vintage theme

Are you going to apply a leech to it?

The series finale comes tomorrow as the Lantern goes up against J.A. Happ, the latter of which is coming off arguably the best game of his young career. We'll also be looking for our third consecutive series victory [!] and the beginning of a new streak as we continue to salvage what we can out of an otherwise lost season. Go team!