Share All sharing options for: Diamondbacks 1, Giants 4: Escape To LA

The Arizona Diamondbacks certainly had their chances today, liberally scattered through the front five innings. But our hitters failed to come through in the clutch, going 0-for-9 with runners in scoring position, the sole tally which resulted, being Barry Enright's bases-loaded sacrifice fly in the fourth. Arizona actually out-hit San Francisco 7-6; the difference wasn't so much that the Giants got knocks with runners in scoring position, more that half of their hits left AT&T Park, as Enright's struggle with the long-ball continued.

We leave the city by the bay with our offensive tails between our legs, swept, and having managed only four runs over the three games. We head down the California coast to Los Angeles, and hopefully easier prey.

Diamondbacks totals for the series. 20 hits in 96 at-bats - that's a .208 clip. As noted, four runs scored, mostly because the team were 2-for-21 with runners in scoring position. 11 walks. And 37 strikeouts, one short of our record of 38 in a three-game set in Colorado, earlier this month. We've struck out 272 times in 26 September contests: I can't say for sure, but I've a sneaking feeling it's the first time ever a team has averaged more than ten strikeouts per contest over a full calendar month.

Overall, the rate there has increased under Gibson to 9.64 per game, from the 9.16 rate under Hinch. However, that hasn't had much impact on the offensive numbers, with the OPS dropping from .752 under Hinch, to .738 coming into today's contest. But the runs per game scored have dropped, from 4.56 to 4.26. This is probably down to what we saw today: a lack of 'clutchiness'. Particularly painful were Adam LaRoche's leadoff double in the second - he might as well have pitched a tent there, because he wasn't going anywhere - and loading the bases with one out in the fourth, and managing only Enright's sacrifice fly.

We also had two on with one out in the fifth, and nothing happened there either, Mark Reynolds going down swinging and LaRoche grounding out. Reynolds was 0-for-3 with two K''s, and has had a truly-wretched spell at the plate. Since September 3, he is batting .053. That's not a misprint. In his last 57 at-bats, Reynolds has just three hits - his last came on the 18th - with 26 strikeouts. Fourteen of the last fifteen Arizona batters to come to the plate were retired, the sole exception Kelly Johnson, who walked with two outs in the seventh. He had two hits and a walk, and escapes the criticism justifiably aimed at the rest of the offense.

Today, especially after the Giants took a three-run lead, it seems like we gave up. Admittedly, one can hardly blame the hitters for giving up after that fourth run, because the last time the Giants allowed more than two runs at AT&T was more than a month ago, all the way back in August 29th. Admittedly, that was also against the Diamondbacks, but our offense seemed to have all hope beaten out of them in the past couple of nights. Seems like the team that crushed Colorado and dispatched the Dodgers, opted not to leave town, apparently having made other plans.

By some measures, Enright didn't pitch badly - five hits in five innings. However, three of those five didn't come back, including a splash hit into McCovey Cove by FlashinthePanda. That made Barry only the fifth pitcher over the last three seasons to give up a trio of long-balls to the Giants in San Francisco. He finishes his rookie season posting a decent 3.91 ERA - however, Enright also allowed twenty home-runs in 99 innings, basically half a season's work. Given the major-league leader (team-mate, Rodrigo Lopez) has allowed 36 this year, that's not a rate that bodes well for Enright's future.

About the only positive to be taken away was three solid innings from the B-Bullpen. Blaine Boyer, Carlos Rosa and Leo Rosales combining to face one batter over the minimum down the stretch. However, the way the offense hit, our relievers would have needed to allow a negative number of runs to get us back into this one, and sterling effort though it was, they fell short of that goal. 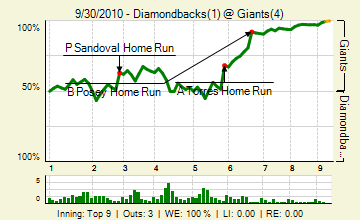 Only 219 comments: a day game, not on television, is never an easy sell and the wind was entirely taken out of the sails by the third Giant homer. DbacksSkins was the only man to get past 25, so I'm not even going to dignify the runners-up with a mention. Also present: Clefo, Bcawz, unnamedDBacksfan, IHateSouthBend, jinnah, soco, BattleMoses, AJforAZ, kishi, Jim McLennan, 4 Corners Fan, Azreous, snakecharmer, venomfan, justin1985 and piratedan7. An accurate summary of feelings can be obtained from the Comment of the Night:

is unsatisfying. I am unsatisfied with this Dbacks game.

I don't think many of us will argue with the sentiment so nice, 'Skins expressed it twice. I'd hoped for better the last time I picked up my recapping pen this season, but you can't have everything, I guess. It will hopefully be up to someone else to document the final win of 2010.