Record: 64-94. Pace: 66-96. Change on 2009: -4.
"The offense sputtered," Ian Kennedy muttered. Although Kennedy was a little less impressive than he had been in his previous four starts, he still pitched well and allowed only five hits through five innings. Pat Burrell delivered the only San Francisco punch with a three-run home run and that was enough for Timmeh Lincecum and the Giants to walk away with another victory. The D-backs were given a surplus of opportunities to regain the lead, but could not succeed. Despite having a runner reach base in every inning, and men in scoring position in four of those innings, the D-backs stranded eleven and scored only once.
A gruesome inning by inning recap after the jump. One for the people and by the people...

Ian Kennedy caps off his hugely impressive year with a 3.80 ERA, 1.20 WHIP, 168 Ks, and a BAA of .226. This just barely beats out the ZiPS projection for Kennedy listed way back in January. Back then, he was given a projected line of:

Hats off to Kennedy for what can easily be called a remarkable year. Unfortunately, the offense couldn't help pick him up yet again and the D-backs spiraled away as the game progressed. Despite the bullpen throwing three perfect frames, Arizona couldn't climb out of the hole. Details along with inning by inning coverage by the members of the GDT!

of all that’s holy, let’s win this game and not have the giants clinch the division on us!

Like, sure, we’re playing the Giants, but I just wanted to let everyone know.

My value over a replacement poster is approximately 10.5 runs.

runs for the Giants. Haha.

Hopes were high in the beginning and Stephen Drew answered our requests by blasting the second pitch of the game into the right field bleachers. Soon after, Chris Young and Kelly Johnson walked but Timmeh would not be phased. Cabin pressure was restored, and Lincecum struck out LaRoche and got a ground out from Montero to end the inning. It was only the beginning of many D-back offensive failures. Ian Kennedy saw a similar threat in the bottom of the inning as Andrés Torres leadoff with a single and soon stole second base. Ian buckled down though, and got the next three batters out.

on the corners, 2 outs on a tough play for Fot or Not.

Hey, Vasquez,have you ever been mistaken for a man ?
No, have you?

that baseball managed to stay in, somehow.

Again, the D-backs put pressure on Lincecum. After Gerardo "RBI MACHINE" Parra singled, Kennedy put down his first sacrifice of the game to quickly send him to second. Stephen Drew then hit a drive up the middle which initially looked like a potential RBI. The ball died a bit as it headed toward the outfield though, and Mike Fontenot was able to knock it down and make sure Parra stayed at third base. Tony Abreu then grounded out to end the inning. Missed opportunities was the name of the game. Three hits and two walks off of Lincecum and only the one home run to show for it. Four men were already left on base. In the bottom of the frame, Pat Burrell nearly misses a home run, which is an eerie foreshadowing.

Chris Young started another rally with a hit OFF of Lincecum. The line drive just skimmed off of Timmeh's glove and made it through the infield. However, the D-backs managed to strike out another three times and stranded another base runner. Meanwhile, Kennedy goes toe-to-toe with a 1-2-3 of his own and two strike outs.

Helping himself with another bunt of a runner into scoring position. Can two-for-two Drew bring him home?

Hey, Vasquez,have you ever been mistaken for a man ?
No, have you?


Things finally got cooking in the fourth inning. For San Francisco, that is. Despite another runner reaching scoring position (on another sac bunt by Kennedy), the D-backs failed to score once again, leaving them with six left on base after only four innings. The Giants wasted no time jumping on Kennedy in the bottom of the frame as the first two batters reached base. Pat Burrell then knocked in the only three runs on the day for San Francisco. 3-1 Giants lead.

I just opened my fridge and realized that I had 3 different previously-opened jars of salsa.

They all were talking to each other and everything, and all of them know all those sobbing secrets you told em

everytime I see Timmay and hs ****ing hair, I despise him a little more.

After two quick strikeouts by Lincecum, CY gets another walk. Adam LaRoche then promptly flies out - seven left on base. Kennedy shows signs of fatigue as a couple of long flyballs give us a bit of a scare but no further damage other than a single. Comments were... sparse.

10 K’s for the seventieth time this season!

SPINNIN’ SOME PHAT K TUNES, YO

Gerardo Parra gets a single but it's merely another opportunity to strand another baserunner - and they do, lifting the number to eight for the evening. Not to mention, it marked the seventieth time this season that the D-backs struck out for 10+ times in a game. Jim was kind enough to provide us with some of the details. Meanwhile, D.J. Carrasco comes in and demolishes the bottom of the frame - 1-2-3.

This is another game

That has pretty much gone downhill from the first at-bat…

is it hockey season yet?

Another baserunner via a Kelly Johnson walk but it just turns into the ninth stranded runner. In a moment straight out of Hollywood, Lincecum stayed in the game after a brief meeting on the mound. With CY at the plate, who had been perfect up to that point, Timmeh seemed destined to finish him. As the crowd cheered on, Lincecum recorded his 11th and final strikeout. D.J. Carrasco continued to domination into the bottom of the frame with another 1-2-3.

Lopez mowing us down!

Mike Hampton in "more than one batter" shocker!

Linecum is out and Javier Lopez is in but the strike outs continue. Lopez records two more to bring the tally to 13. Rusty Ryal managed to sneak in a pinch hit but quickly becomes the nine stranded runner of the game. Mike Hampton comes in for the bottom of the frame to record his one two outs. He's lifted for Demel who gets the final strikeout and helps maintain perfection for the D-backs bullpen.

Brian Wilson is actually the strongman accomplice of a melodrama villain.

Augie in to PH

to start the 9th

"In the book of life, the answers aren't in the back." ~Charles M Schulz

You are our only hope

And we lose again.

The ninth started with a bang as Augie Ojeda smacked a double to right field. After moving to third on a Stephen Drew groundout, Mark Reynolds pinch hit and drew a walk to represent the tying run. Kelly Johnson and Chris Young then capped off the game with a strike out and ground out - eleven runners left on base.

The fangraph is what you would expect it to be... 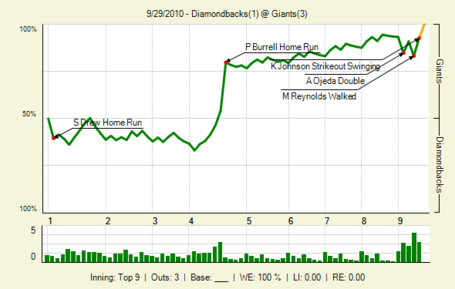 A decent GDT with over 700 comments among a crew of 17. Here's how it unfolded: 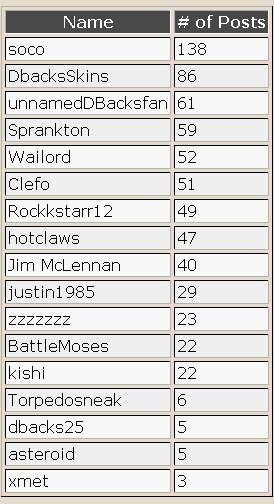 Barry Enright (6-6, 3.73 ERA) faces Madison Bumgarner (6-6, 3.06 ERA) for a matinee matchup. Enright returned to form in his last outing and looks to bring that momentum to San Francisco while Bumgarner threw seven shutout innings against Chicago. Expect another duel!