It was a dark and stormy night... wait, no, that's the beginning to a different horror story. It was a warm and positively gorgeous night at PhoneCompanyPark in San Francisco where the Diamondbacks opened up their last road trip of the year against the now-NL-West-leading Giants. The Diamondbacks got to play spoiler against the Rockies last week and here in San Francisco, they have an opportunity to make a big impact on the post-season, if not for themselves.

San Francisco showed their mettle, and the Diamondbacks showed their weaknesses. After taking a 2-0 lead and failing to capitalize on the wildness of Jonathan Sanchez, Rodrigo Lopez had a wild night of his own and took the 4-2 loss by his name. Details in the usual place...

Jonathan "ZOMG" Sanchez started off the game quite ineffectively. He couldn't find his release point to save a seal and walked two of the first three batters he faced - unfortunately, Stephen Drew was picked off of 1st base (during which he just stood in the middle of the dirt), so Kelly Johnson's walk only made it a runner on 1st and two outs instead of runners on 1st and 2nd and one out. Suffice it to say, Chris Young popped up and nothing interesting happened.

The Diamondbacks had Sanchez on the ropes in the second inning. Adam LaRoche scorched a single to open the frame, went to 2nd on a walk by Miguel Montero, and made it to third on a very wild pitch by Sanchez. San Francisco walked Cole Gillespie to load the bases for the Diamondbacks pitcher Lopez (not to be confused with the Giants' reliever Lopez..... not that I did that or anything....). With two strikes, I could've sworn I saw Joel Youngblood give Lopez the "Swing the bat and I'll kick your ass" sign, but he must've given him the "Hit a sacrifice fly for the lead" sign because that's precisely what Lopez did to drive in the first run of his career. By this point, the Giants' bullpen was up and Bochy was likely going to pull Sanchez if Drew reached base, but Drew struck out to end the inning.

A Kelly Johnson solo home run (barely) to the tall bleachers in right gave the Diamondbacks a 2-0 lead in the 3rd inning, but the Giants fought right back in the bottom half. Andres Torres tripled to right on a ball that Gillespie jumped for but seemed to bounce off his glove. (That was just the beginning of Gillespie's tough night in the field - he later dropped a ball that he had caught while diving into the stands, and backed off on a ball he might have had a chance of catching.) Mike Fontenot brought in Torres, and the Giants had halved their deficit. They caught up on their own solo home run by Juan U-ribe (hear the chants) in the 4th.

Meanwhile, Jonathan Sanchez had settled down. He retired 8 straight Diamondbacks from the 4th-6th innings, hitting 200 Ks for the season on Chris Young in the 6th inning. Rodrigo Lopez had struggles of his own to deal with, though he was certainly getting the benefit of a strange strike zone. But a strange strike zone doesn't help when you leave change-ups hanging right in the middle of the plate, like he did to Pablo Sandoval (who doubled to Triples Alley - any other base runner and it was easily a triple) and pinch-hitter Nate Schierholtz to give the Giants a 3-2 lead. Mike Hampton was brought in for his traditional one-batter appearance to relieve Lopez. (By the way, I think I know why he only gets one batter - he uses up all his arm strength throwing over to the runner at 1st!! I swear, he threw more throw-overs than pitches.) The Giants added their 4th run in the 7th inning after Blaine Boyer's base hits allowed Jordan Norberto's leadoff walk to score.

The Diamondbacks provided their own bit of drama in the 8th inning. Ryan Roberts doubled deep to center and ent to third on a single from KJ, and Brian Wilson was brought in for the 5-out save. On a 2-2 count, Chris Young was called out on a swinging strike-three that was nowhere near being a swing. It was mentioned on Twitter, in the Gameday Thread, and I'm sure on the broadcast that it was NOT a swing. I was sitting in plain view and the Giants caught a big break. Unfortunately I wasn't close to seeing what CY said but he was absolutely livid. LaRoche came within 2 feet of making them pay with a deeeeeep fly ball to straightaway center field and that 399 sign, but it was caught to end the inning. Two fly-outs and a strike out ended the game. 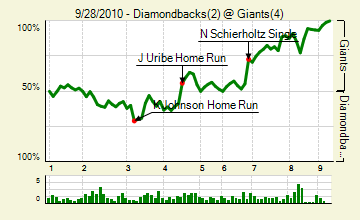 The only green comment was one I was going to pick anyway, made after Lopez's RBI:

I'm on ur base drivin in my guyz

Ian Kennedy faces Tim Lincecum tomorrow evening. Lincecum was pulled up a day so that he can start on short rest Sunday or Monday against the Padres if needed to secure a playoff spot. The Dodgers and Cubs did their parts to help out today, eliminating the Rockies from contention and pushing the Padres to 2 games below the Giants in the NL West. Technically, the Giants could clinch the division on Thursday.