Ladies and gentlemen, today marks the last time we'll see the Diamondbacks play a game in Phoenix until next March. We started the season of with a 6-3 win over the Padres, with Dan Haren getting his first win. So, how did we end the season? Well, let's just say this- we at least got to see the boys walk off the field with smiles on their faces and the strains of "D-Backs Swing" playing in the background.

Before we get into the game, let's just take a minute to consider our lineup for the day. Obviously not our front line- IHSB referred to it as "AAAA-day at the ballpark." Looking at who we ran out to start, I was curious to look back at who we ran out on Opening Day. Of our nine starters this afternoon, only four started that long ago afternoon in April. Of the five new names, three weren't even on our Opening Day roster- Cole Gillespie and Brandon Allen started the season in Reno, and today's starter, Joe Saunders was in Anaheim. So, obviously we've seen some changes through the long, long season.

As for the game itself? Well, it looked like it was going to be a struggle between the pitchers. Or maybe just between apathetic offenses, but whatever works. The Dodgers drew a walk off the Colonel in the first, but it wasn't until the bottom of the second when Brandon Allen got the first hit of the game, with a two out single. Neither offense really seemed to be threatening too much early on- the Dodgers had a runner in scoring position in the fourth, but Saunders got the next two batters to fly out to close down the threat. Meanwhile, the Diamondbacks just weren't doing anything against Chad Billingsley- Allen's single in the second was our only base runner in the first four frames.

Things finally started happening in the fifth inning. After two quick outs, the Dodgers put together a bunt single and a hit to the outfield to put two runners on with two outs. As our radio broadcast team started to tell us how, in situations like this, Saunders seems to turn it on to shut down the opponent, he reached back and- gave up a two-run double to James Loney. Bah. A walk to Casey Blake made me a little nervous, but Saunders struck out Russ Mitchell looking, and we were still in the game.

The team fought back, though, and the bottom of the fifth started out with a confusing and rare occurrence- a triple from Miguel Montero. Miggy had one previous career triple, hit back in 2008 in the cavernous confines of PetCo Park. After a walk from Allen, a Cole Gillespie sacrifice fly brought Miggy in to score, and closed the gap to 2-1. The confusing part of the fifth was when, with two outs and a runner at first, Kirk Gibson made the fiery decision to pull Joe Saunders and send Adam LaRoche in to pinch hit. LaRoche struck out looking, and we were left still trailing and dreading the fact that we had four innings of the Bullpen Special ahead.

Our fears, at first, seemed justified. Leo Rosales took the mound in the sixth inning, and followed a K to Reed Johnson by allowing a double to Rod Barajas and a single to Billingsley. But with runners on the corners and one out, he got a double play out of Rafael Furcal, and Blaine Boyer gave us a 1-2-3 inning in the seventh to keep the Dodgers quiet.

The bottom of the seventh started out with a confusing and rare occurrence- a triple from Miguel Montero. Wait, no, that can't be right. Well, it is. Today was the tenth time in the last 50 years that a National League catcher has put up two triples in the same game, though not the first time it had happened to anyone in the stadium- Joe Torre had a game like that in 1964. We weren't able to do anything with this triple from Miggy, though, as Cole Gillespie grounded into a fielder's choice that ended up with Montero being thrown out at home.

With that disappointment from the offense, things took a turn for the worse in the top of the eighth, too, as Russ Mitchell reached with a single, and then, with two outs, Rod Barajas decided to thank us for that World Series ring in 2001 by launching a pitch from Sam Demel deep to left field, giving the Dodgers a 4-1 lead. That's gratitude for you, I guess.

The one bright spot of the top of the eighth inning? Chad Billingsley was pulled for a pinch hitter. Finally! After Ronald Belisario got Augie Ojeda to ground out, Torre went to the bullpen again to get George Sherrill. Sherrill started off by walking Stephen Drew, and then Tony Abreu decided to thank the Dodgers for all that time in the minor leagues by launching a pitch deep to left field, cutting the lead to 4-3. That's gratitude for you, I guess. Sherrill gave up a single to Kelly Johnson before Torre had seen enough and went to the bullpen, bringing in big Jonathan Broxton to face Chris Young. As our television team told us that Young was a career 0 for 13 with 8 Ks against Broxton, Young decided it was time to change that. He took the first pitch Broxton gave him, and sent it deep to left field, giving the Diamondbacks a 5-4 lead.

Heading into the ninth, we turned to our sort-of-but-not-officially-closer Juan Gutierrez to shut down the Dodgers. The inning started with a bunt attempt for a hit by Furcal, but Montero made a great play to gun him down at first for the out. A fly out to right by Ryan Theriot was the second, and after a Kemp single, James Loney fouled out to third to end it. 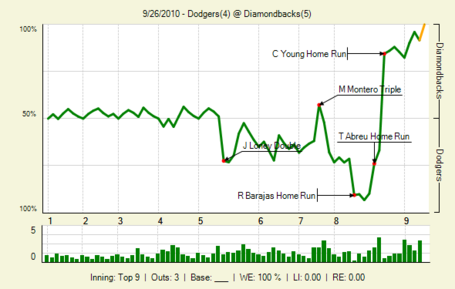 A talkative, if not heavily attended GDT today. Only 11 commenters added up for 380 comments, with IHateSouthBend leading the tally with 62 comments, while NASCARBernet and DBacksSkins took second and third place, passing 50. Also stopping in to chat were Clefo, xmet, snakecharmer, Bcawz, Jim McLennan, Azreous, kishi and hotclaws.

A great come back, a series win over a division rival, and a nice homestand to end the season. Even without getting in to the controversy behind the final Legends race or the bat shards impaling the infield, that was a pretty good way to end the home portion of our year. The Diamondbacks went 40-41 at home this year. A travel day tomorrow as we head to San Francisco, so let's just take the time to enjoy this win.