Of starters with at least seventy innings pitched, Daniel Hudson owns the best ERA in all of baseball. "Why, Wailord, what a small sample size! He was terrible with Chicago, you can't just discount it!". Aye, there's a point there: with his fairly awful tenure in Chicago this season factored in, Kid Huddy is still the fifth-best pitcher in baseball (again, by ERA - ERA+ and it's third best). The names he's behind, you ask? Just a few scrubby journeymen: Josh Johnson, Clay Buchholz, King Felix, and Adam Wainwright. Yeah, Halladay misses the cut. So sorry.

Now, I do realize that it's truly a small sample size and his peripherals call for some regression. However, Dan Hudson is also a badass, and laughs in the face of regression (maybe something that Enright should have picked up on?). He continued his dominance tonight (and came just a strike away from a career first). Hit the jump for the details, or simply if you wanna yell at me for crowning Dan after, like, ten games.

He really is great, isn't he? It may be best to stop before a mancrush is developed, but I fear the ship has sailed; Daniel Hudson is just awesome. Awesome enough, even, to remain perfect through the first three innings (ringing up four in the process) before Trent Oeltjen broke it up with a ground rule double. Small-ball ended up scoring the Aussie (sacrifice to pitcher followed by an RBI groundout) to put the Dodgers up 1-0. Though, in reality, who cares? What's a simple run when Dan Hudson is on the mound? Well, initially, it seemed pretty insurmountable. In typical Diamondbacks fashion, we stranded runners on first and second in the bottom half of the first, left the bases loaded in the second, then let a leadoff walk go to waste in the third. After Los Angeles took their 1-0 lead, one would think the offense may have clicked into gear, needing to get the run back; nope, they stranded two more runners in the bottom of the fourth, letting John Ely shut us down, despite allowing five free passes through just four innings. Luckily, in the night, something very fortunate happened: the offense reversed itself, and good ole Dan Hudson did not.

After Huddy set down the Dodgers 1-2-3 in the fifth, the offense finally did something, as Stephen Drew got onto third with a leadoff, standup triple and scored on a Tony Abreu sac fly (hey, look, he did something). Hudson shut down the side again in the sixth, and the offense truly kicked into gear to get some solid support for their ace (wait, can I say that?). After an Adam LaRoche double and intentional walk to Brandon Allen (with a John Hester strikeout sprinkled in there), Cole Gillespie strode to the plate, promptly doubling his season home run total on the second pitch of the at-bat, giving the Diamondbacks a lead even the bullpen couldn't relinquish (then again, you'll see why in a bit). Arizona tacked on another run in the seventh on a LaRoche sac fly, and Hudson sauntered onto the field again in the eighth to continue his domination; although he allowed a walk (his first of the night) and filled the count on the next batter, a double play quickly took care of that, and a Chin-lung Hu foul out (no, he never made it to first) ended Hudson's night.

Just kidding. Dan Hudson was left in to hit for himself in the bottom half of the eighth, apparently signaling that he'd attempt his first-ever complete game. He grounded out to third (oh, and Abreu grounded into a double play with the bases loaded, ending the eighth - suprise, right?). Hudson, at 93 pitches, went out to try and put the lid on an incredible performance. Matt Kemp hit a chopper to first, where a covering Huddy got the first out; the Aussie then struck out swinging on just four pitches; Ryan Theriot, killing the one hitter, singled to right, and (sadly) a walk to Andre Ethier ended his night at 8.2 inning pitched. Mike Hampton came in, attempting his first save since 1993, but a quick James Loney single (that Chris Young made a great diving attempt at) was all he saw before the Gutzilla came in. Four pitches from Guti was all it took to strike out Russ Mitchell, killing any hope the LA faithful may have been clinging to, giving the Diamondbacks - and more importantly, Daniel Hudson - a well-earned victory.

It was one of the best starts of Dan's young career, going eight and two-thirds, allowing just two runs, two hits, two walks, and a hit batsman (most likely to prove he's mortal), in the process. Although he tallied just five strikeouts, he was simply all-around dominant on all fronts and shut down the Dodger lineup. Say what you will about this season being lost and horrible, if there's anything to say about it in the future, 2010 is the year we got Daniel Hudson, who should be one of the young anchors of the rotation for years to come. 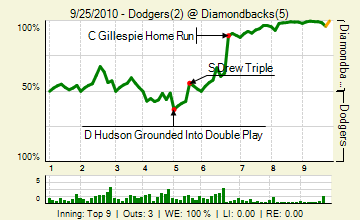 Pitters continue to avoid my recap days' GDT's, but thas'ok (/hides tears). It was absolutely silent, as just 235 comments were posted throughout the game. Hotclaws and Snakecharmer led the way, tying at 41 (further evidence of how quiet it was - 41 led the way?), and I lagged behind in third with 35. Also in on the conversation: Clefo, IHateSouthBend, pygalgia, NASCARbernet, Jim McLennan, Bcawz, Azreous, jinnah, xmet, i'moscar.com, and Muu. Not a single green comment at the time of posting (ah bloo bloo bloo, Clefo), so I went with one that - even if I wanted to - could not have any context go along with it, as there was none to be had:

Potato Bongo in my kidney I like fish to dance alternatively

Tomorrow's the rubber match between us and LA, as Joe Saunders goes up against Chad Billingsley (BZZZZZZZ), looking to take the final series against the Dodgers on the season. With that, my short recapping season is over; it's been fun in my limited tenure, and I look forward to recapping moar winz in 2011. Like, every recap better be a win. Go Dbacks.