Bit of a contrast to last night's wild contest, highlighted by uncontrolled pitching, long balls and unnecessary length. This one was over in not much more than half the time yesterday's took (well, it might have been, had our bullpen not slowed things down!), with Clayton Kershaw and Barry Enright both pitching solidly and making the batters earn their way on base - the duo combined for one walk in sixteen innings of work. Unfortunately, for the Diamondbacks - but fortunately for my fantasy team - Kershaw was better, with Kelly Johnson managing the only two hits, both singles, Arizona managed until the ninth inning.

Details after the jump, though it'll be a short one

It was good to see the Red Viper get back on track after a trio of rough outings, where it looked at times like he was throwing in the Home-Run Derby. This evening, he did a much better job of keeping the ball in the park, allowing five hits in his eight innings, with one walk and three K's. What hurt Enright this evening were a pair of triples, one of which drove in a run, the other then coming home on a sacrifice-fly. The former was delivered by a name familiar to the 'Pit - particular the part of the 'Pit with two X chromosomes. Former heart-throb Trent Oeltjen is now wearing Dodger Blue, and had two hits tonight against us. Nice to see him still in the majors though.

Otherwise, Enright kept Los Angeles without a hit with runners in scoring position, and they only had a couple of at-bats against him like that. It took him 93 pitches to get through the eight innings, 66 of them strikes. A typically hefty fly-ball rate, with 13 of those compared to six ground-balls, but after the past few appearances, this was a comforting return to the kind of start we saw from Barry in his first couple of months. Especially good to see it at a hitters' park like Chase. He did hit Dodgers' shortstop Hu, though the GDT was remarkably restrained with the "Hu's on first" puns.

Even though Enright did his best to keep the bullpen out of the equation, they still showed up in the ninth. Jordan Norberto gave the Dodgers what turned out to be a crucial insurance run, on a homer - he and Carlos Rosa issued another couple of walks. The Diamondbacks did break up the shutout with an RBI double by Tony Abreu scoring Chris Young, who had singled. That got rid of Kershaw, and a walk to Stephen Drew put the tying run on base with one out, and Adam LaRoche as the winning run. Unfortunately, he went down swinging and pinch-hitter Ryan Church took strike three, so there was to be no heroic comeback for us on this night.

The problem with the offense was less the ninth inning than the first eight. In that time, the only base-runner we managed was Kelly Johnson, who singled twice against Kershaw. We weren't exactly hanging around either, with our 33 plate appearances taking only 124 pitches. Mark Reynolds went hitless in three at-bats and his average is now officially below the Uecker Line. :-( Adam LaRoche had an even worse night, however, going 0-for-4 with four strikeouts, and the team reached double figures in K's for the ten-billionth time this season. I may be slightly exaggerating there, though only slightly...

Looks like a good crowd at Chase this evening, with the official number being a tick or two over 38,500. That makes it certain the team will pass two million for the season, probably tomorrow, since they need only 23,000 the rest of the way. However, it does look likely to fall short of the 2005 number at the end of the year. 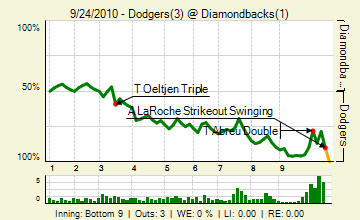 A fairly-light Gameday Thread, containing as much religious as baseball discourse. Bcawz powered his way to the front, ahead of Clefo and justin1985, with others present being Jim McLennan, kishi, Azreous, Bcawz, Rockkstarr12, az47dbacksgirl, snakecharmer, pygalgia, 4 Corners Fan, hotclaws, frubio, unnamedDBacksfan, AJforAZ and a late-arriving visitor, who couldn't quite become our Rally Wailord. Kishi picks up Comment of the Thread, for something that should make Trent feel right at home

MAYBE WE CAN GO WALKABOUT AFTER THE WALKOFF.

The winning streak departs town with the Rockies, but the return to form of Enright helps mitigate the pain of defeat. We'll be back tomorrow and see if Hudson can do to the Dodgers what Kershaw did to us.