With a 1.000 winning percentage, new GM Kevin Towers is clearly just what the doctor order for the Diamondbacks, his steady hand clearly instrumental in guiding the team to another victory this evening over the Colorado Rockies at Chase. Okay, that is probably a bit of a stretch, but powered by long-balls from Stephen Drew, Adam LaRoche and Kelly Johnson, the home team cranked out their best offensive performance in approaching four weeks. Despite spotting the visitors a four-run lead, they made a winner out of Rodrigo Lopez, and give us a shot at sweeping Colorado out of town tomorrow night.

I think we were all ready to write this one off after Rodrigo Lopez had a particularly Lopez-esque first inning this evening, allowing back-to-back home runs to the Colorado Rockies, that dug his team-mates a four-run hole and got Arizona's Win % down to 21.2%, before they even got the plate. The blasts also moved Lopez up to fourth on the franchise single-season list; with two starts remaining, he needs four to tie all-time leader, Brian Anderson, who served up 39 in our inaugural season. This was a bit of regression for Lopez, as he had only given up one in his previous four outings.

A four-run deficit was magnified, given we hadn't scored more than three of Ubaldo Jimenez in five previous attempts against him in 2010. However, the offense seemed to be keen to impress Towers with their fieriness. Stephen Drew got the ball rolling - or, more accurately, flying - in the right direction, homering to lead off our half of the first, with his thirteenth shot of the year. Adam LaRoche then pulled the Diamondbacks back to within one, sending his 24th ball out of the park to right in the third innings. It was the first time since June 6th, 2008 - 85 starts ago - that Jimenez had surrendered more than one HR in a game.

Chris Young completed the comeback with a two-RBI single in the fourth, the highlight - from our point of view - of a see-saw inning. It started with a walk to Brandon Allen, and Gerardo Parra then reached on a bunt single. With admirable timing, Rodrigo Lopez then opted to demonstrate the fallacy of "Good things happen when you put the ball in play," by grounding into a twin-killing. Drew then walked, stole second - I was surprised that it was only his eighth of the season there - meaning Young's two-out single brought him in as well as Allen, giving Arizona their first lead of the evening.

Cap'n Kirk wasted no time in yanking Rodrigo out of the game after he'd qualified for the W by pitching his fifth inning, even though RoLo had thrown only 83 pitches. To Lopez's credit, he settled down admirably, allowing one base-runner after those back-to-back shots in the opening frame. He ended the night with a line of five hits, no walks, three strikeouts and, of course, those four runs. It was the first time since August 24th, 2010 - five starts ago - that Lopez had surrendered more than one HR in a game...

The bullpen experienced mixed results. DJ Carrasco was horribly wild, walking three batters in the sixth, and was helped out immeasurably by a double-play ball in the middle of them. However, Blaine Boyer calmed things down with a 1-2-3 seventh. While Mike Hampton did fail to retire every batter faced, for the first time in his Diamondbacks career, Sam Demel (with an assist from Stephen Drew, on a liner with a man in scoring position) stopped the runner he inherited from tying the game up. He notched the save, staying in the game for the ninth after Arizona added three insurance runs against the Rockies' pen on a RBI single for Church, and two-run HR by Johnson.

For this game would be a great example of the meaningless of K's. Arizona piled up fourteen strikeouts tonight, and didn't even have to go to bat in the ninth. That's because we took full advantage of wildness from Colorado, working seven walks. Drew and Young each had a hit and two walks, while LaRoche had two hits and a walk, and Brandon Allen drew a pair of free passes. After the top of the first, this was a sound performance by all aspects of the team: eight shutout innings, good patience at the plate, and plenty of offense. Ian Kennedy goes tomorrow, and we'd tie the season series 9-9 if we can complete the sweep, and also end Tankapalooza. 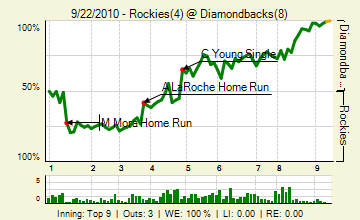 So, who hasn't yet

Things ’Skins has in common with foulpole for 400, please. -- soco

There are times when I am quite glad to be able to watch a game. This evening would be one such, since the prospect of seeing the "unfortunate" [to quote one commentor] shirt shown above in motion... Especially after lunch. Still, we won, so that makes it a "lucky" shirt, and therefore, Daron is not allowed to change it until we lose. Yeah, I'm instigating - guess who won't be able to watch tomorrow's game either?