Memo to the Rockies. The next time you leave Denver, might want to remind your traveling secretary to pack a few boxes of those high-altitude Rawlings baseballs you appear to use at Coors. Because when Joe Saunders holds you to one run in eight innings... Well, draw your own conclusions. Nothing quite like slamming a nail into the coffin of another team's playoff aspirations. There's some really good TV shows on - we watched the first episode of The Event this evening, and it looks like a keeper. Colorado fans are welcome to join us in Arizona, enjoying the fall schedule, because it doesn't look like the post-season will be of much interest to them.

Well, details such as they are. I can provide you with a detailed review of Salt if you want? Actually, there were some similarities between that movie and tonight's game, in that both feature someone pretending to be other than they were. Salt has a CIA agent, who may be pretending to be a Russian operative, while the Rockies are a baseball team, who may be pretending to be a playoff contender. Saunders held them to six hits over eight innings of walk, and held them scoreless until an RBI single in the eighth broke up the shutout bid. He allowed no walks and struck out seven, throwing a total of 113 pitches, reducing his ERA to 4.46.

Colorado had very few scoring chances over the entire evening: just two at-bats with runners in scoring position. Saunders faced the minimum number of Rockies through the first three innings, and was then spotted a three-run advantage in the bottom half of the third. The fourth did see Colorado try to fight back, getting the tying run to the plate after CarGon doubled and TroyBoy was hit by a Saunders pitch - an act that helped cause an inexplicable official warning to both teams from the umpires. I guess we didn't get the official league memo stating that we're just supposed to groove pitches over the middle of the plate to the Big Tool.

Still, Saunders got the third out, and the next time the Rockies got anyone into scoring position, it was the eighth inning. They did put a run on the board - our favorite outfielder, Ryan Spilborghs, coming off the bench (which meant he didn't have to patrol right-field!) to drive it in. While that got the tying run to the plate with no-one out for Colorado, they couldn't do anything, Carlos Gonzalez angrily smashing his bat after striking out swinging to end the inning. "We were making it a lot easier on him because we were swinging at bad pitches," bleated Gonzalez after the game. Er, Carlos: if you swing at it and come up empty, it isn't a bad pitch.

Admittedly, we didn't have an enormous amount more of success offensively - exactly the same number of hits, six, and walks, one, as the Rockies. However, we did have more at-bats with RISP (eight), and did a better job of grouping the hits. Half of them came in the third inning, where the Diamondbacks runs occurred, and it all happened with two outs. Stephen Drew singled, stole second, and Ryan Roberts drove him in with a double. Kelly Johnson followed up with his 23rd home-run of the season, a 381 ft. shot to left. His OPS of .845 trails only Dan Uggla among second-baseman in the NL.

And, after much talk, The Record was finally set in the seventh inning this evening, when Adam LaRoche struck out swinging to end the frame. That gave the Diamondbacks 1,400 strikeouts for the year, breaking the all-time single-season record by a team, set by the Brewers in 2001. I liked Cap'n Kirk's comment on the record after the game: "If we struck out that many times and we are in first place, nobody would care. That is not the case, but that is not the reason why we are where we are at. It is one of many reasons." We'll have more on the strikeouts tomorrow, and whether they "matter" or not.

Juan Gutierrez notched his 11th save of the season, closing out the ninth with a 1-2-3 inning, to complete what could be a potentially lethal blow to the Rockies, given both the Giants and Padres won this evening. Here's to inflicting more Rocky Mountain Aiiiiiiiii's on them tomorrow. 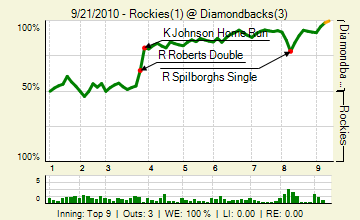 soco was the most prolific commentor of the evening, getting past three figures, while DbacksSkins came up just short [insert obvious comment there], and third place went to frubio. Also taking part: Dallas D'Back Fan, Jim McLennan, hotclaws, NASCARbernet, pygalgia, Clefo, Turambar, Rockkstarr12, Husk, jonny-yuma, 4 Corners Fan, Azreous, kishi, AJforAZ, jinnah, themysticalone, marionette and snakecharmer. soco was a contender for Comment of the Night, but I haven't seen The Music Man, so he loses out to a less intellectual comment - from johnny-yuma, on why the Batglove hasn't been adopted leaguewide yet:

didn’t like how the teachers were demonstrating how to use it.