The 2010 Diamondbacks and their strikeouts. Do they "matter"?

Share All sharing options for: The 2010 Diamondbacks and their strikeouts. Do they "matter"?

"It's definitely something that needs to be addressed. Whether I retain this position or someone else is sitting here in the not-too-distant future, I would tell you it's a real issue."
-- Jerry Di Poto

"Good things happen when you put the ball in play.". I've lost count of the number of times I've heard that sentence this season, usually from the lips of Mark Grace - either sarcastically, as a Diamondbacks strikes out with a man on third and less than two outs, or positively, when an opposing fielder boots a ball and we reach base. Last night, Arizona set the record for most strikeouts ever by a major-league team, passing the mark of 1,399 set by the Milwaukee Brewers in 2001 - they are also the first team to have five men post 125 K's or more in a single season.

It's obviously easy to link those "unproductive outs" to the team's overall struggles this season. But is there factual evidence to support the conclusion? Do strikeouts matter, in the sense that they lead a team to score less runs? After the jump, we'll take a look at this, and Arizona's place in history. Get a cup of coffee first, it's quite long. And maybe a sandwich.

With 11 games left, Arizona has 1,403 strikeouts - at current pace, they wouldn't just be the first team to crack fourteen hundred, they'd be the first ever to reach fifteen hundred, being on pace for 1,505. Their nearest rival in the National League is currently the Marlins, who are 141 behind, more than five full games of nothing but whiff. It will mark a second consecutive season at the top for us; we also led the league in 2009, racking up 1,298, and were behind only Florida in 2008. It's interesting to note that even the new arrivals, Kelly Johnson and Adam LaRoche, have set new career highs in their first season with the team.

However, a couple of counterpoints. In 2004, when the team lost 111 games, the Diamondbacks struck out 1,022 times - below average, and only 11th in the NL. And the leading strikeout team in the American League right now are Tampa Bay, who are 81 ahead of their nearest rival, yet still look set to be playoff-bound. It looks like manager Kirk Gibson was right when he said last night, "If we can strike out that many times and be in first place, nobody would care." [Hat-tip to 'charmer for the preceding couple of paragraphs]

But do they matter? On the most basic level, it seems to make sense they would. After all, you can't get a hit without putting the ball into play, and that also puts pressure on the defense, forcing them to get the out. The Diamondbacks have about 300 strikeouts more than the average National League team this season: if they were at the average, and had put the ball in play those three hundred times, they would probably have got about ninety more hits and 45 or so additional runs. That would be good for about five extra wins this year, certainly worth having. However, "Good things happen when you put the ball in play," is an over-simplification.

For first of, actually, no, good things don't: happen - or at least, far from always. Most of the time - about 70% of the time - a ball in play still results in an out. Even allowing for home-runs, which are not counted as "in play", the majority of cases a ball gets put in in play, it will lead to the same result as a strikeout. Indeed, some pretty bad things can happen as a result. We never hear that statement after Justin Upton grounds into a twin killing. And 119 times this year, the Diamondbacks have put the ball in play and given up two outs as a result, more than a straightforward K would have caused. This needs to be taken into account as well.

Let's start at the broadest of levels. The chart below is for all teams in the 2010 National League, and plots the percentage of plate appearances ending in a strikeout against runs scored per game. 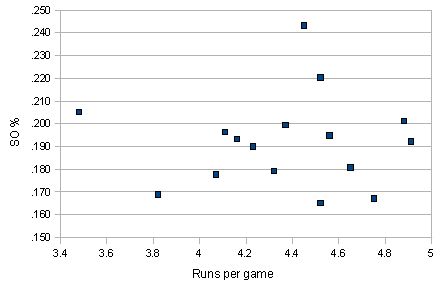 Can you see a pattern there? I can't, unless "amorphous blob" counts. The Diamondbacks have, far and away the highest strikeout rate, yet are just about in the middle of what matters - runs scored. Meanwhile, the Astros have one of the lowest K-rates in the league, and have outscored only the Pirates. All told, the correlation between strikeout rate and runs per game in the NL this year is 0.016. In other words: there isn't one. For comparison, the correlation between other factors and runs per game was: BB rate (0.613); HR rate (0.748); GIDP rate (-0.180); BA (0.891); OBP (0.942); SLG (0.895); OPS (0.948). Strikeouts just don't matter. Getting on-base - that is what counts.

This is something we looked at in a previous article on the 'Pit: Of unproductive outs - and is a walk as good as a hit for the Diamondbacks? There, we found that when the team walks zero or one time, they won only 32.5% of games; when they walked six or more times, the win percentage shot up to 71.4% However, I want to take a slightly different tack here, breaking things down to an individual game, and looking more into whether strikeouts are linked to our overall production of runs per inning. Here's a chart plotting K/9 against Runs/9 for the Diamondbacks  this year - that way, it takes into account extra-inning games, and home wins where we only bat eight times. 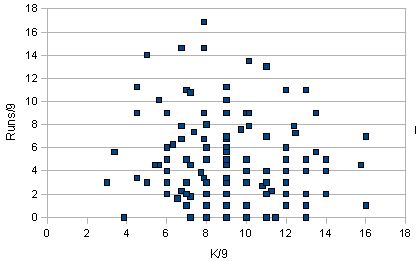 Well, it clearly shows, when the Diamondbacks strike out more, we score less runs. I think if you squint really hard, you can also see a sailboat in there. Sarcasm aside, seems we are dealing with selective memory. If the team fans a dozen times and only scores once, the mind draws a line between those two, and thinks the former caused the latter. However, if we strike out 13 times and still score 11 runs [as we did on May 15], or a season-high 16 times while scoring seven [June 10, both in nine-inning games], the mind quietly forgets to make a note of it, being too busy dancing the body happily around the living-room and making "Wooo!" noises. Tho' maybe that's just me.

You want the numbers? Broken down on a per-game basis, the correlation between K/9 and R/9 for Arizona this year is -0.122. That's not completely insignificant, but is pretty close to it [0.10 is usually the cutoff line there]. Number of hits per nine innings have a correlation to runs scored of 0.820 [with home-runs in particular at 0.625] and walks/9 are at 0.379. Once again, getting bases on balls are a much bigger factor in offensive production, than not taking your bat back to the dugout with you.

There is a slight correlation between the number of strikeouts and the result. In wins, the D-backs fan at an 8.65 rate. In losses, at 9.90. However, if you look at the starters who have whiffed most Arizona batters in a game, you'll find nothing but above-average pitchers. There's last year's NL Cy Young #1 and #2 (Tim Lincecum and Chris Carpenter), front-runners for this year's awards (David Price, Mat Latos), etc. None of them have an ERA+ this year below 105. I think that's why we went 2-10 in those dozen contests: not "because" of the strikeouts, but because we were facing good to great opposing pitchers, and they do tend to fan more batters.

"If you have Mark Reynolds with 200 strikeouts, and given that the average hitter would strike out 100 times, Reynolds' strikeouts cost one run. I know it doesn't 'feel' like it, and I know it's incredibly frustrating to see a hitter strike out in clutch situations, since fans predominantly simply want the batter to put the damn bat on the damn ball. But anyone who sits down and works it out has always come to a very similar conclusion."
-- Tom Tango

There has been analysis done on the specific value of events in a game, based on what effect they have on the runs scored during the rest of the inning. Obviously, it depends on the number of outs and also the number and position of runners on the bases, but based on analyzing a huge amount of data over the course of multiple seasons, at left are the run values (taken from Tango's The Book) for the results of various plate appearances. Notice that non-K outs and strikeouts are almost identical, with just two-thousandths of a run separating their value.

You have to read the comments on the article linked above to see the passionately-held misconceptions that are prevalent concerning strikeouts, e.g "You can look at all the obscure stats you want to make Reynolds look good... But the guy is batting .205 and striking out 220 times. That is simply ridiculous and not acceptable for a major league player." Contrast that with Tango's comment: "Reynolds' strikeouts cost one run." I'm going to repeat that, in bold: Reynolds' strikeouts cost one run. The all-time single-season K champion, the only man to have struck out 200 times in a season, who has done it three times... And it cost the Diamondbacks ONE RUN this year.

What has gone unnoticed with Reynolds, is he has already set a career-high in walks. His BB rate has increased again: from 8.9% in his debut year of 2007, it has gone up to 10.4%, 11.5% and, this season, 13.7%, compared to an average of 8.7%. As a result, his on-base percentage is within a dozen points of his career average, with it better than 2008, when his strikeout rate was lower i.e. he was putting more balls into play. As noted above, getting on base is far, far more connected to scoring runs than the strikeout. I'm far more concerned with the way Reynolds' line-drive % has slumped this year, dropping from 20% to 13%. That is "a real issue", I tend to think.

Now, this isn't to say that there are no times where a strikeout is particularly damaging. The most obvious case is when there's a runner on third and less than two outs. You want to get that man home, and a strikeout renders it all but impossible. However, if we look at the stats for that situation, Arizona is... The best-hitting team in the league. We bat .361, with an OPS over 1.000. And the strikeouts? The National League average is that hitters whiff 16.8% of such plate-appearances; the Diamondbacks are all the way up at, er, 17.1%. Over the course of almost the entire season now, we have 0.7 strikeouts more than average, in the situation when it perhaps matters most.

More generally, we do lead the league in strikeouts with runners in scoring position, though it's a good deal closer - the Marlins are ten behind. To counter that, however, our overall production - 0.34 runs per plate-appearance with RISP - is right in line with the league average of 0.33 runs. That's because the Diamondbacks' on-base percentage in these situations is .360, ranking them seventh in the NL. Again, what matters is reaching the bag at first.

In summary, the problem, if there is one, with the Diamondbacks' offense is not strikeouts. It's just too many outs in general, and I'm a little disturbed to hear our ex-GM claim otherwise. If the strikeouts go down, but (as is likely) are largely replaced by other outs, and reduce the number of home-runs Arizona hits, the odds are that it will have a negative impact on the runs per game we score. Not making outs, by whatever means, is far more crucial for our hitters, than whether those outs happen to occur through the air, on the ground or in the catcher's mitt.

Though it is kinda cool to be part of the most fascist baseball team of all time... We should be wearing those spiffy black uniforms more often. :-)

[Some stats used are through the end of Monday]