Share All sharing options for: Diamondbacks 3, Pirates 4: International "Swept By the Pirates" Day

It seemed like today was stacked to be completely against the Diamondbacks.  International Talk Like a Pirate Day, on the day they play the Pirates?  8 measly strikeouts from the season team record?  A recent run that has seen Arizona drop 11 games out of 14?  The possibility that the Pirates would sweep the Diamondbacks for the first time, ever?

Luckily for our hopes, Daniel Hudson would be climbing the lonely mound to face down the Bucs, a team that was looking for it’s first sweep in the season since May 6th.  He would be opposed by Zach Duke, who has struggled mightily the past couple games, and all season.

Things didn’t start off well for the visiting team, with the Diamondbacks going down around a Chris Young single with no fuss.  Then Andrew McCutchen stepped up and whacked the very first pitch to give the Pirates an early 1-0 lead.  After this, though, Hudson settled down and only let up a walk to Pedro Alvarez for the rest of the inning.

And boy, would Hudson settle into a groove.  He went 6 1/3 innings, and only had three more base runners.  He collected 6 strikeouts along the way, and was in complete control.  The only time he ever ran into trouble was in the seventh inning, after giving up a double with one out.  Everyone needs a little help from their friends, and Sam Demel was there to put out the fire, inducing a double play on the first pitch.

Although Zach Duke wasn’t Hudson good, he still hampered the D’backs all day.  The Boys in Sedona Red managed to scatter a few hits throughout the day, but couldn’t get anything going until the fourth.  Chris Young started things off, taking a walk after falling behind early.  Mark Reynolds would ground out towards third, but Young was still able to move up to second.  Young’s speed set up Adam LaRoche, who drove CY in with a double.  Tony Abreu joined in the fun, and had his own RBI double to give the Diamondbacks a 2-1 lead.

Things seemed to be rolling for the Diamondbacks when Ryan Roberts stepped up to the plate in the eighth with one out.  By this point Hudson was out, but Roberts was looking to extend the lead and give the young pitcher some extra breathing space for a win.  He took two pitches, and deposited a pitch past the center field fence.  3-1.

On to the bottom of the eighth, where Aaron Heilman happened.  Ronny Cedeño singles.  The hit and run is on, he makes it to third with a McCutchen single.  Jose Tabata digs in, only one out.  He takes two balls, Heilman is really working.  The pitch is in, and Tabata hits a grounder to third and Reynolds is there but there’s a bad hop and he’s going to have to hurry.  He fires it to second, one out, but McCutchen is sliding hard and there’s no double play.  Cedeño is safe at home with no play, 3-2.  Neil Walker is up now, and he takes a look at 4 pitches, lets Heilman dig himself into a 3-1 hole.  The next pitch is a meatball, he knows, Walker knows it, the whole damn world knows it and it’s going to center, it’s going past the wall, it’s bouncing into the bushes that have been so carefully clipped to say "Pirates."  Well, these Pirates stole one today, with a little help from Heilman.

We all need a little help from our friends. 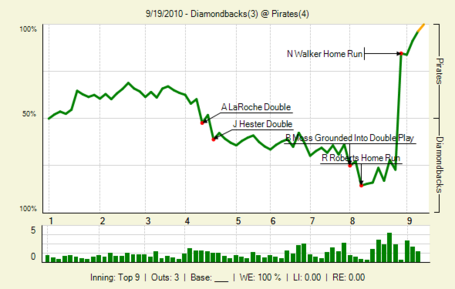 Beyond the loss, and the sweep, how did the Diamondbacks do?  Well, the team only struckout 6 times, and avoided season team title.  Of course, that just means they'll get it the next game, since they're only 2 K's away.  Reynolds struck out twice, which was enough for him to break the 200 K mark for the third time in his career.  Another loss, and the Diamondbacks' season continue to spiral further and further out of control.  Remember when we thought it was so likely that the D'backs would win enough to avoid the 100 loss season?  Yeah, about that.

A surprisingly active, for an early start and NFL day, GDT with over 500 by the end of the game.  I was the King Of Komments with over 150 and no one else dropped a trey.  I was joined by justin1985, hotclaws, NASCARbernet, kishi, unnamedDBacksfan, Jim McLennan, Jdub220, snakecharmer, themysticalone, DbacksSkins, emilylovesthedbacks, 4 Corners Fan, Clefo, Wimb, Azreous, Jack Cromwell, diamondintherough, and Wailord.

Comment of the Day goes to Daron Sutton, who said as Walker was still rounding the bases:

Travel day tomorrow, which is good because starting Tuesday the D'backs face off against the red-hot, and hated, Rockies.  Try to have a good Sunday.