As wise philosopher Dwayne Carter once posited, "you know you're at the top when only heaven's right above you" - I, for once, believe the inverse rings true as well: you know you're at the bottom when only Pittsburgh's right below you. The two worst teams in the National League clashed today, with both teams sporting fantastic September records of 5-10, and after our awesome-by-our-standards August (the only month where we played .500 ball or better), I figured that it was a sign that we'd pull things together with our young pitching corps. Guess not, as we're now "enjoying" our second-worst month this season, trailing only the hellish month that was June.

James McDonald, the young, former Dodger that Pittsburgh acquired in the Octavio Dotel trade (the first one, that is), took the hill for Pittsburgh, and most of us probably hoped for a repeat of the shelling that the Diamondbacks laid upon him in his first career start back in 2009. With SnakePit-interviewee Barry Enright his opposite, facing the worst team in baseball, why, surely we'd win! Well, we didn't, (and don't call me Shirley) - demoralizing details after the jump.

To start, it seemed like both teams were trying to showcase their innate abilities to waste opportunities and baserunners. After Stephen Drew popped up to kick off the game, McDonald quickly walked both Kelly Johnson and Mark Reynolds. Oh, wait, what's this? A scoring opportunity?! Have no fear, the 2010 Diamondbacks are here! Miguel Montero grounded out to end the inning, wasting an otherwise great opportunity to get a quick lead. How about in the second? Oh, a LaRoche leadoff double? True to form, the Diamondbacks let another scoring chance go, as Church flied out, Allen struck out, and after an intentional walk to Gerardo Parra, the Red Hydra grounded out (is that what we're calling him now?) to kill hope yet again.

On the other hand, Barry Enright continued to have issues with the longball. Like McDonald before him, Barry had the fortune of letting the opposition ruin their own opportunities early on, using a caught-stealing and double play to avoid any potential damage in the first two innings. In the third, though, the home run bug continued to plague Enright, as McCutchen blasted a two-run bomb to deep center, putting the Bucs up 2-0. Enright did single in the first run in the top half of the fourth, cutting the deficit to just a single run. Just quickly as we trimmed our deficit, Pittsburgh extended their lead, as John Bowker crushed a two-run homer to center, increasing the Pirate lead to 3. Enright's night was cut short after just three and a third after giving up a single to Snydes and - better yet - a double to James McDonald. Zack Kroenke came in, allowing a walk and a single (both runs charged to Enright) before the bleeding was stopped at 7-1.

It was pretty much an ugly night from thereon, save for a few bright spots. Kelly Johnson provided one of those bright spots in the fifth with a solo shot to right, but Leo Rosales quickly gave up two more runs in the bottom half (and nearly another homer on top of it), and the game remained quiet until the seventh. After watching former-Diamondback kill his old team (interesting note on Chris Snyder's night from the GDT here), former-Pirate Ryan Church demolished a 3-1 Daniel McCutchen two-seamer, a three run blast that took the lead down to grand-slam level. Unfortunately, the offense reverted to its previous level of suck until Adam LaRoche singled in Reynolds in the ninth to make it 9-6 (a textbook example of too-little, too-late). Evan Meek got Church to fly out to right to end the game, extinguishing any last hopes for a ninth-inning comeback. Though, if you wanna look on the bright side, we won if you don't count runs scored in the fourth... 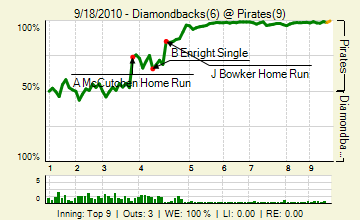 Enright's pitching was actually worth -26.2%, but I merged his 5.1% at the plate in... as for the GDT, it seems as if Pitters are just as ready for the season to end as the team is, as the GDT tonight continued the downward trend in activity, totaling under 400 yet again. xmet led the way with 65, with hotclaws and Clefo tallying 46 and 38, respectively. Also in on the conversation: Rockkstarr12, emilylovesthedbacks, Jim McLennan, soco, DbacksSkins, 4 Corners Fan, snakecharmer, leemellon, NASCARbernet, themysticalone, Azreous, shoewizard, justin1985, BattleMoses, and piratedan7. As for Comment of the Night, although the green comments were plentiful (for once), Clefo's response to justin referring to Luke Skywalker as Luke Walker (in an attempt to make a joke with Neil Walker) amassed seven recs, the most I've seen in some time.

There's a flag on the field

"Unnecessary stretching for reference, 15 yard penalty, loss of down"

We face the Pirates tomorrow - hoping... /gag... hoping to avoidbeingsweptbytheworstteaminbaseball. There, I said it. The bright side is that we'll have Kid Huddy on the mound against Pirates "ace" Zach Duke, and at this point, if anyone's gonna get us a win, it's gotta be him.