Diamondbacks 3, Pirates 4: Ah. So THAT'S where the bullpen went...

Share All sharing options for: Diamondbacks 3, Pirates 4: Ah. So THAT'S where the bullpen went...

If you needed evidence of how far the Diamondbacks still have to go, this evening's game in Pittsburgh would be Exhibit A. While Ian Kennedy provided another very solid outing, allowing two runs in six innings and leaving with the lead, the bullpen couldn't hold on to it. Blaine Boyer allowed a home-run in the seventh, and Esmerling Vasquez failed to retire a batter in the ninth, first issuing two walks, then giving up a walk-off single, that gave the team with the worst record in the majors the victory over Arizona. Meanwhile, the offense managed only three runs, and Tony Abreu's failure to get a bunt down in the ninth may also have proven costly.

Games until the blessed end of the season: 14.

Let's start with the offense. Or lack, since it was the fifteenth straight game in which we scored five runs or less: there have been two longer streaks in franchise history, and if Saturday and Sunday don't end the run, we'll have tied the longest ever (August 30-September 16 last season) by the time this team leaves Pittsburgh. On the other hand, we struck out six times this evening, the lowest tally in two weeks, and good things happen when you put the ball in play - or so I have repeatedly been informed by Mark Grace (and, this evening Tom Candiotti). So I presume that means we won this one? After all, we did score the necessary three runs too.

Two of those came in the third inning, with the Diamondbacks capitalizing on an Pirates error to lead off the frame, which let Rusty Ryal reach. Gerardo 'RBI machine' Parra then got one of his two hits off a left-hander this evening, doubling Ryal home and tying the game up at one run apiece. A perfect bunt from Kennedy moved Parra to third, and Stephen Drew gave Arizona the lead with a single. Parra got his second RBI with another double in the seventh, albeit a rather fluky bloop dropped on the left-field line, on a pitch down and away. That one gave Arizona the lead, and put Kennedy in line for the win.

Truth be told, the Diamondbacks should have had more, particularly in the preceding inning. Drew led things off with a double, and Chris Young laid down a perfect bunt, getting the somewhat generous benefit of the call at first to put men on the corners for us. [Jim Joyce blowing a call at first, and saying the runner was safe? Nah, that's never happened before...] Unfortunately, we couldn't capitalize: Kelly Johnson struck out, with Young also being caught stealing on the same play, Adam LaRoche went down swinging too, and Drew was left stranded at third - exactly where he had reached, with nobody out.

We should also have scored the go-ahead run in the ninth. LaRoche drew a walk, and was pinch-run for by Justin Upton, who showed any forearm issues were not affecting his legs, by stealing second-base. Tony Abreu, called upon to sacrifice Upton to third, took one called pitch, made another feeble attempt, fouling it off, and finally managed to be abysmally late on an 85 mph slider. Although Miguel Montero did walk, pinch-hitter Brandon Allen struck out, and Parra couldn't catch lightning in a bottle for a third time. For the record, Abreu does not a successful sacrifice in his MLB career, so why Gibson didn't use, say, Augie Ojeda, escapes me.

It proved costly, due to the failings of the Arizona bullpen. With one out in the seventh, Boyer fell 2-0 behind Ryan Doumit, then grooved a fastball up in the zone, and the Pittsburgh catcher gratefully accepted the gift, depositing it in the bleachers in right-center. It was the 23rd blown save officially credited to a Diamondbacks pitcher this season. Still, the eighth inning went smoothly, under the watchful care of Aaron Heilman, and lefty veteran Mike Hampton continued to impress, retiring his sixth consecutive batter since joining the team. But he's a LOOGY, and so Cap'n Kirk went to Esmerling Vasquez.

Vasquez promptly walked the leadoff batter, after getting ahead 0-2. And the next guy as well, on four straight balls. One would have thought this might have been just the time for one of azjazzman's patented "teaching moments." But Gibson left Vasquez in, even though he fell 2-0 behind the next hitter, meaning he had thrown ten consecutive pitches out of the zone. And it would have been 11, had the batter not helped Vasquez out by swinging at another non-strike. Still it was merely delaying the inevitable: on the fourth consecutive 94-mph fastball of the at-bat, a ball was dropped into the shallow outfield, and the throw to the plate was too late. Game over.

I didn't actually get to see much of Kennedy's pitching this evening, since he was almost at the end of his outing by the time I got home. But you can't argue with the results. Kennedy allowed a two-out home-run in the first inning, then settled down, facing the minimum over the next three frames. A passed-ball in the fifth allowed a runner into scoring position, who scored an unearned run on a double, and that was it for the Pirates. Kennedy's final line for the evening: five hits, one walk and four strikeouts over six innings, with two runs, one of which was earned. He was lifted after 92 pitches, as the team looks to rein in the workload.

Ian Kennedy's line in September is now:
Kennedy: 20 IP, 9 H, 2 R, 1 ER, 6 BB, 16 K, 0.45 ERA
and zero wins. He became the first pitcher in Diamondbacks' history to allow a total of one earned run in three starts without getting a W. The last NL pitcher to do that over a trio of consecutive appearances, going six innings or more each time, was Roger Clemens for the '05 Astros - he actually had three consecutive games throwing seven shutout frames, ending in three no-decisions! Before that, it was Tony Armas for the '01 Expos. [Oddly, Kennedy's former team-mate, Edwin Jackson, almost did it for the Rays in 2008, but threw only 5.1 frames in his third outing] 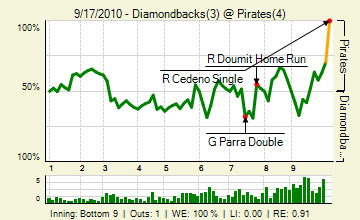 'Skins led the way in the Gameday Thread, though with 323 posts and 16 commentors, it didn't take much. Clefo and snakecharmer were second and third, while also taking part were: hotclaws, Bcawz, Jim McLennan, kishi, Rockkstarr12, themysticalone, Azreous, Husk, 4 Corners Fan, xmet, brian custer, justin1985 and diamondintherough. Just the one green comment, making it easy for me to pick Comment of the Night, which is a good thing, since I have little interest in reliving this one vicariously through the reactions.

It’s me. You know, you want to get revenge on your old team, don’t you? What’s that? You feel kinda sorry for them. Well they are the Pirates I get that… What? Yes I realize I sound like Bob Newhart but you gotta not strikeout here!

So, there'll be no ending of Tankapalooza in Pittsburgh, after this disheartening loss. We'll give it the old college try tomorrow, with Barry Enright going to the mound for the Diamondbacks, hoping to stem the flow of long-balls he's been enduring of late.