Diamondbacks 3, Reds 1: Finally, we can spell "Lopez" with a W

Share All sharing options for: Diamondbacks 3, Reds 1: Finally, we can spell "Lopez" with a W

Seven solid innings from Rodrigo Lopez and one solid inning from the offense, proved enough for the Arizona Diamondbacks to get a fairly unexpected and credible split of a four-game series on the road, against the National League Central leaders. What was probably one of his best performance of the season [trailing only the eight innings of one-run ball against the Braves], also meant that Lopez got his first W in more than two months, since before the All-Star break. Getting it against the NL's most productive offense is all the more impressive.

It's not as if Lopez had pitched brilliantly during the run, but he did have his share of bad luck and poor run support as well. He had four quality starts over that time, and lost all four games - because the Diamondbacks scored a total of four runs in them. While they didn't score many more than that today, it was enough for Lopez to get an appropriate reward for his work today. He scattered eight hits, but after a two-out RBI double in the first, the only other hit Cincinatti managed with runners in scoring position, was an infield hit with one out in the fourth, to put men on the corners. A shallow pop-fly and ground-out ended the threat.

Cincinatti were still holding on to the 1-0 lead at that point. Their pitcher having taken care of the Reds, Arizona's offense took care of the deficit in the fifth - for once, making the opposition pay for walking us, rather than the other way around. Miguel Montero and Ryan Church each enjoyed a free trip to first base, courtesy of Edinson "Look, we were just trying to have a baby" Volquez and RBI Machine Gerardo Parra duly tied the game up with a double. Lopez couldn't help his own cause, grounding one back to the mound, but singles by Stephen Drew and Kelly Johnson proved more productive, completing the scoring in the three-run frame.

That was, literally, just about it for the offense. 14 of the next 15 Diamondbacks to come to the plate were retired, the exception being Parra, who picked up his second hit of the day to lead off the seventh. Johnson had an even better day at the plate, going 3-for-4, with Drew's knock the only other bit of success for the offense. The Reds brought the tying run to the plate a couple of times, but Lopez, along with Aaron Heilman and Juan Gutierrez (who hit a man with two outs in the ninth, causing minor palpitations in the GDT), kept the threat at bay.

The Diamondbacks now get to head off to Pittsburgh with a win under their belts, and three games against the worst baseball team in the National League majors Solar System western spiral arm of the Milky Way. If we can't end Tankapalooza there, with Ghidrah pitching in those games, then it probably isn't going anywhere for the rest of the 2010 season. 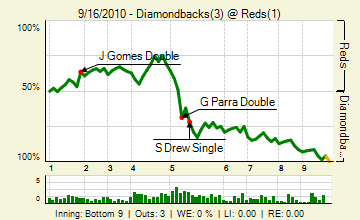 Sheesh. A dozen participants and 162 comments? That's what will happen when they stage games at a time when no civilized person is conscious. Bcawz was the only person to get past 25, with 'charmer and [name redacted for employment purposes] in second and third. Also present: soco, unnamedDBacksfan, piratedan7, DbacksSkins, 4 Corners Fan, emilylovesthedbacks, kishi, Xeifrank and Clefo. Only one comment received any recs, and I don't think this one will be going into the Comment Hall of Fame, somehow... </grudgingly>

You're going to get

the recap knocked up???

Things ’Skins has in common with foulpole for 400, please. -- soco

As noted above, we get out of the 'Nati and head on to the 'Burgh for a weekend series. I imagine SnakeBytes will follow a little later, and I'll be posting something in the evening as well,. so check back for that.