Share All sharing options for: Diamondbacks 5, Reds 7: The Taco Famine of 2010

It was close. Very close. With two down in the ninth and a runner on second, Adam LaRoche lifted a ball down the right-field line into the corner. But Jay Bruce times his leap perfectly, taking away what might have been a tying home-run, and certainly taking the free tacos out of the mouths of Diamondbacks' fans. The staff at Taco Bell have still not been troubled by the promotional offer since the calendar changed from August; the 13-game (to date) streak without scoring six runs has been surpassed only half a dozen times in franchise history.

An error, some questionable management and Esmerling Vasquez's wildness largely cost us this one, I think. Details, anyone?

The first couple of innings didn't give us much hope that we'd come within a few inches of tying the game up in the ninth. The Reds opened things up by scoring four runs with two outs in the opening frame. Saunders allowing five hits in the inning, but also being hurt by an RBI error on Chris Young. "He had to hustle to even get close to it, but in the end it just clanked off his glove," said kishi of the play [I'm still waiting for the replay of the game, at time of writing], and the two-run homer that followed was even more painful. Cincinnati tacked on another run in the fifth, and at the end of two, our Win Percentage was already down to a feeble 8.5%.

The Arizona offense did come back to life in the third, with Miguel Montero swatting a bases-loaded double to center, and Brandon Allen following with an RBI ground-out. Joe Saunders settled down too, retiring eleven straight batters at one point, and with the help of a pick-off and a double-play, faced the minimum number of Reds from the third through the seventh innings. Kelly Johnson had hit his 21st long-ball of the season in the top of the seventh, a run which brought the Diamondbacks to within one-run of the Reds. But it was the eighth inning where the game probably turned.

Arizona had to face Cuban flamethrowing phenomenon, Aroldis Chapman. I think he must have been feeling a bit unwell this evening, because Chapman "only" managed to hit 101 mph on the radar-gun. Having heard stories of a fastball that warped the very fabric of time and space around them due to its speed, I was somewhat disappointed. Still, a broken-bat groundball and two K's followed, giving the Diamondbacks thirteen strikeouts on the night. They have struck out a dozen or more times in six consecutive games - the longest streak by any team since records began. Indeed, no other team has ever done it more than four games.

I was surprised to see Saunders out there for an eighth inning; while he'd been pitching well, he was over a hundred pitches going into the frame. I'm wondering if Cap'n Kirk was trying to make up for having such a quick hook last time the Colonel was on the mound? If so, it backfired, as a double and bloop-single doubled the Reds' lead. Gibson went to the bullpen, but an error by left-fielder Rusty Ryal (later changed to a hit, a scoring decision which provoked a snort of derision from Mark Grace), an intentional walk and a hit batter gave Cincinnati another run before the inning finally ended.

The Diamondbacks did make a game of it, getting the tying run to the plate with no-one out in the ninth, after Tony Abreu and Stephen Drew singled to lead things off. A pair of groundouts did score what would have been the tying run, in not for the general Arizona failures in the bottom of the eighth, then LaRoche ended the contest, albeit coming agonizingly close to actually tying things up. Drew and Johnson each had a a couple of hits, and Young took a couple of walks. But there is some more good news - the defeat and Baltimore's win, does tie the Diamondbacks with the Orioles for third in Tankapalooza! Hey, I'm planning for the future... 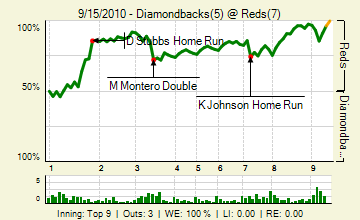 soco cracked three figured, with DbacksSkins following behind, and Rockkstarr12, some way back in third. Also present: Bcawz, Clefo, 4 Corners Fan, kishi, hotclaws, justin1985, Jim McLennan, emilylovesthedbacks, snakecharmer, zzzzzzz (yeah... About that...), AJforAZ, piratedan7, blue bulldog, NASCARbernet, xmet, marionette and edbigghead filling out the roster. There were a couple of green rec'd comments, but providing them with any kind of meaningful cultural context would take far too long. So I'll go with this clearly self-explanatory (at least, relatively) one from 'Skins:

was so full of balaclava.

I do think this is an opinion with which we can all empathize. Back tomorrow - which is a day game, dammit - and we turn to Rodrigo Lopez to try and salvage a split of the series.