As Christof would have said of Daniel Hudson, "you're the star." Hudson has quickly become one of the only reasons left for Diamondbacks fans to want to watch any of the remaining games. With his Conor Jackson-esque eyebrows, Curt Schilling-esque strikeout ability, and his James Dean-esque coolness there is nothing not to like about him. Knowing that only he could be the one to derail the slump, Hudson took on the challenge and shined on once again to the tune of a 3-1 victory.

Hudson has now thrown in eight consecutive outings without allowing more than three runs and is showing no signs of slowing down. He still has a bit of a ways to go to reach Enright's famous 12 game streak, but clearly the possibility is there. Perhaps even more impressive is Dan's ability to mow batters down. He came into tonight's game with an 8.1 SO/9 ratio and did just about that, striking out eight batters in eight innings. It compliments his shiny 4.68 SO/BB nicely. Some regression is definitely expected but that's not going to stop me from enjoying it while it lasts.

Meanwhile, the offense still appears sluggish but showed signs of recovering from the funk. They pegged Travis Wood for nine hits but only scratched away three runs in the process. Barring a few less mistakes on the base paths and this one could have been a lot more lopsided.

The game started out as expected with the two young pitchers dealing away. After only three innings were in the books the D-backs had already struck out five times. Then things started to heat up during the fourth as Chris Young, Adam LaRoche, and Mark Reynolds hit consecutive singles to start the inning and tally the first run of the game. Despite a minor error in judgment by 3B coach Joel Youngblood, Young still manged to score from second base on Reynold's single.

After a Rusty Ryal strikeout, John Hester joined the party with another single to load the bases. It seemed as if LaRoche could have potentially scored but he never got a good read on the ball and ended up sitting at third base instead. Things continued to get interesting after a strikeout by Augie Ojeda. Hudson stepped up and knocked another single into right field to plate LaRoche. Unfortunately, another error in judgment led Reynolds to blow past Youngblood's (somewhat late) stop sign and was ultimately thrown out at third base. In the end, there were three plays during the inning with questionable calls made on the basepaths.

As the game wore on Daniel Hudson showed no signs of fatigue. After another D-backs run was tacked on in the fifth thanks to a Justin Upton single, Hudson cruised with a comfortable 3-0 lead. A few Cincinnati hits were scattered here and there but Dan held them in check through eight without any real struggles or concerns. It was really fun to watch.

After 106 pitches through eight innings, Gibson pulled the plug on Hudson and called in Gutierrez to wrap things up. In typical "OMG WTF IZ HAPPENNING" style Guti wasted no time in making things extremely nerve-racking. After loading the bases and even hitting Drew Stubbs to bring in the first Reds run of the game, Juan finally "finished him" and recorded the last out along with his ninth save of the season. Seriously, he has nine saves now. True story.

Really, the biggest thing to take from this is the amazingness that is Daniel Hudson. He shutout the #1 ranked NL offense and only allowed four hits and one walk - to a team that averages five runs per game and nearly 10 hits. If you're not impressed with me ranting about how awesome I think he is maybe the fangraph can convince you... 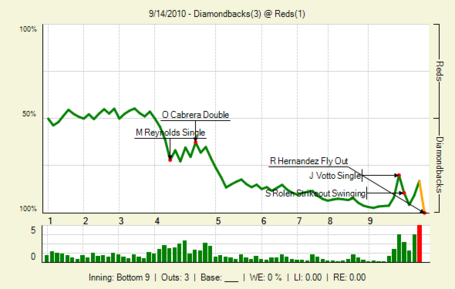 A pretty mild GDT but it got the job done. 23 participants were around to witness the greatness that is Dan Hudson. hotclaws thought he was the most awesome, with soco and Jack Cromwell not far behind. The rest of the cast who thought Dan Hudson was the coolest consisted of: Baja F1, 4 Corners Fan, Bcawz, Clefo, Rockkstarr12, kishi, BattleMoses, AJforAZ, asteroid, Dallas D'Back Fan, xmet, Sprankton, snakecharmer, Jim McLennan, Skii, DbacksSkins, dbacks25, NASCARbernet, Jdub220, and marionette who barely made the list.

Comment of the Night belongs to Jim McLennan for this wonderfully out of context quote:

I hope you mean

A-Rod’s head has been cut off and is also now sitting in a deep-freeze in a Scottsdale facility?