Share All sharing options for: Diamondbacks 2, Reds 7: Night of the Long Balls

"The tough times are the ones that truly show you who you are." That's what Barry Enright said when we talked to him recently. Unfortunately, it seems as if we may have cursed our rookie starter, because he struggled for the second consecutive game tonight. He left too many balls up in the zone and over the middle of the plate, and the Cincinnati Reds did exactly what playoff chasing teams are supposed to do with them. They clubbed four homers off Enright, added a fifth later, and cruised to victory.

Things started well enough for the Diamondbacks. After a scoreless first, Arizona jumped ahead, on back-to-back home-runs from Miguel Montero and Ryan Church. Unfortunately, this was one of those games where things went entirely downhill from there. The Reds immediately tied things back up with their own pair of back-to-backers in the second, and added two more long-balls off Enright in the third, another solo shot and a two-run blast, to put Cincinnatti 5-2 up and mark the end of Barry's night. He allowed seven hits and all five runs in three innings, and has now allowed seven home-runs over his last nine innings. Ouch.

Enright became only the second pitcher in the National League this year to allow three blasts in consecutive appearances: You probably won't be surprised to hear that the other one was Dan Haren, when he was pitching for the Diamondbacks in May. The two previous Arizona pitchers in franchise history to accomplish the dubious feat, were Edgar Gonzalez in 2004 (who did it three starts in a row) and Brian Anderson, during July 2001. Pitches fly out of Great American Ball Park rather well: the seven which did so tonight gives, the stadium 162 on the year, trailing only Milwaukee (168) and, of course, Chase Field (179).

Meanwhile, the offensive had another bad outing. The 2001 Brewers struck out 1,399 times, the most ever in a single-season; however, the thirteen times we fanned tonight gave the Diamondbacks 51 in the past four games, and 1,339 for the year. At this pace, the record will fall sometime during the weekend against the Pirates. Bronson Arroyo struck out a career-high eight in six innings, and that was without Mark Reynolds in the line-up at all. While my fantasy team appreciates the donation, it's clear new management has done absolutely nothing to remedy the K-virus plaguing the team.

Stephen Drew had two hits and a walk, while Church and Parra had a pair each, but the hitters failed miserably in the clutch, going 0-for-11 with runners in scoring position. There were only a couple of moments of interest after the second inning. In the eighth, Rusty Ryal had a pinch-hit plate-appearance that was the Lord of the Rings trilogy (cinematic version) of plate-appearances. By that I mean, it was very long, mostly entertaining, but the ending largely sucked. Here's the pitch-by-pitch account:

If you're playing at home, that's a total of sixteen pitches in the at-bat, including fourteen after galling behind 0-2 in the count. It would have been nice if he'd finished it off with a home-run - or at least a walk - but you can't have everything. For the record, it was the same number as pitches as Justin Upton saw all night, going 0-for-4 with three strikeouts. I also enjoyed the ejection of the Reds reliever, after he had been yanked from the game, for arguing balls and strikes with the home-plate umpire. Maybe when you've got more than 31 major-league games under your belt, eh? And newly-promoted catcher Konrad Schmidt made his MLB debut, walking in the eighth.

Arizona's base-running was highlighted again today, with a couple of times on which the team could have taken an extra-base - one, Church not going from first to third on a single, and the other, Augie Ojeda not advancing on a sacrifice fly from second - each decision probably cost the Diamondbacks a run. As Mark Grace pointed out, there is enough athleticism on the team that we could afford to be more aggressive. But in reality, the Diamondbacks are dead last in the NL at taking an extra base, doing so only 34% of the time, compared to league average of 40%. It's another area the team will need to work on if they wish to compete.

I have also to discuss the crowd at Great American Ball Park tonight, because it was announced as only 12,061. Yep: a September night game, for a team almost certainly going to the playoffs, and they barely got twelve thousand through the turnstiles. And while it was the lowest crowd of the year, it's not an egregious exception: it was the thirteenth time this year, the crowd in Cincinnati failed to reach fifteen thousand. Overall, they are ranked 20th in the majors for attendance - between 19th-place San Diego and 21st-placed Arizona. Admittedly, it's an improvement on the 26th they managed last year, but still... 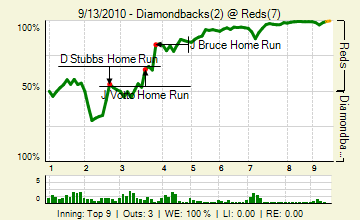 The Gameday Thread made it to just 250 comments: I sense a lot of people have now found better things to do, and as we have lost seven of the last eight games, who can blame them? xmet took the top spot, albeit with only 37 comments, just pipping me (waves fist) and hotclaws. Also present: ZonaBacks10, NASCARbernet, IHateSouthBend, Clefo, 4 Corners Fan, Wailord, blank_38, Bcawz, snakecharmer, Azreous, kishi, unnamedDBacksfan, AJforAZ, Rockkstarr12, frubio, BattleMoses and Arizona via Slough. The last named had only one submission, but fully deserves Comment of the Night:

This team is in such a hole right now

that it’s probably getting messages of support from trapped Chilean miners.

Tomorrow has what looks like the makings of a good pitching match-up, with Daniel Hudson taking on Travis Wood: it's another 4:10pm first-pitch, so see you for that.