I actually forgot what time this game was on and tuned in about a half hour late. The Diamondbacks pitching staff, however, seemed to forget this was a game at all. Joe Saunders allowed 7 runs in just over 2 innings of work, his shortest outing in about a year, and the bullpen didn't help him out at all. They gave up 3 of Saunders' baserunners plus 6 more of their own in a rout by the Colorado Rockies.

The Diamondbacks offense was sporadic, and 4 runs just wasn't going to cut it in a game that ended up like a spring training game as Colorado rested some of their starters and Arizona gave Zack Kroenke his major league debut. (It was one to forget - he now owns an ERA of 20.25.)

My attempt at a creative recap after the jump.

We really want to like you. We traded away Dan Haren for you, so it would seem you're going to be a big part of our rotation next year. But when you give up 7 runs in 2 1/3 innings, that doesn't endear you to us! Now, I know Gerardo Parra was being a bit lackadaisical in right field and Stephen Drew had an error in that third inning that technically made 3 of those runs unearned. But, please don't learn to walk in a run, we're trying to get rid of the people who do that. Your pitch count was too high, you were wild, you weren't showing interim manager Kirk Gibson much confidence, and that's why he took you out after that bases-loaded walk and didn't give you a chance to get out of your own mess.

I'm sure you're a solid competitor and a good pitcher most of the time, but please, don't ever do that again!

So, we love the high socks and all, but please stop letting inherited runners score. We don't need ANY more of that like tonight. Saunders gets pulled and you're in there in a tight spot, but a triple to the catcher? Ugh. And then a double by the PITCHER? True, Ryal was planning a little shallow, but double UGH. And for icing on the cake, you gave up a home run to Troy Tulowitzki (his first of two, he was 3/3). You should know by now there is no Rockie player we hate more than Toolo, so thanks for adding fuel to that fire.

Please keep the high socks, because right now, that's about all we like about you....

Ohhh boy..... well, welcome to the big leagues, kid. I'm sure there have been major league debuts worse than yours, but you probably don't want to know about them right now. Coors Field is a tough place to pitch, as you now know first-hand. I wish I had something better to say about your outing other than "Well your first inning wasn't too bad" but I'll be honest, I'd kind of tuned out by then. I think you got even more nervous after Toolo's second home run to deep left in the 6th inning, because then you allowed at least hits that stayed in the park, including double from Todd Helton that tied him for 35th all-time with Ted Williams. But, hon, three hits in a row allow runs to score too, and we kind of don't like that.

I'm sure your 20.25 ERA isn't indicative of your greatness. Tomorrow is another day, think of it as a chance to start chipping away at it!

You did a good job today. Thank you for getting Kroenke out of the inning without allowing any more runs. You're the only one who has a "0" by your name tonight, pitching wise. (The offense had quite a few zeros.) 'Tis much appreciated.

You, too, had a pretty good night, all things considering. You pitched well, you got 6 outs, including a double play. We could've done without the home run to Chris Ianetta, but honestly, you were probably just getting your work in then anyway and maybe working on a few things, so one bad pitch is okay considering what your teammates did.

We hope you can stay consistent!

So, did you all miss the plane to Colorado, or what? Those of us on Twitter saw your bags get loaded on the plane, perhaps your hitting shoes weren't in there? Chris Young, your solo home run in the 2nd inning was gorgeous. You knew it was gone, and it was waaay gone, and you didn't show anybody up. The run that Miguel Montero, Gerardo Parra and Cole Gillespie collectively produced in the 5th inning was okay, but seriously, it takes 3 of you to score one run? The Rockies know how to score multiple runs on one hit, s'all I'm sayin', maybe you could watch some tape. Ryan Church and Ryan Roberts, thank you for your 2 RBIs in the 9th, maybe Gibson will let you play longer tomorrow?

.... Sigh. Not a good effort all around, boys. I know we all want the season to be over so we can get a good draft pick next year, but does it have to be SO bad in the process? 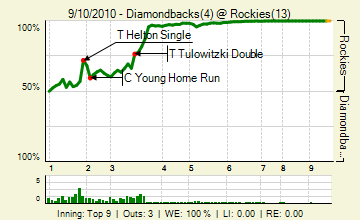 The 21 of us who stuck it out in the gameday thread did not have a lot of fun. Conversation picked up towards the end, though that was probably only because Phil and Emily came back from their new 5 Guys burger joint (and did not bring back any food for the rest of us, bastards). Justin and his alter ego led the way with a combined 109 posts, Clefo in second place, and frubio's getting the hang of this thing because he was in third. All present were: Clefo, Rockkstarr12, Bcawz, Yu_Darvish, justin1985, Wailord, BattleMoses, snakecharmer, DbacksSkins, Reynolds rapper, blank_38, hotclaws, xmet, Wimb, frubio, brian custer, Zavada's Moustache, NASCARbernet, themysticalone, PinchHitLancePainter, and emilylovesthedbacks.

Comment of the night goes to justin, whom Wailord helped to successfully get a pretty funny contextless comment.

But you said “heh” before I blew myself.

The Green Lantern will try to light up Ubaldo Jimenez tomorrow evening, but it won't be on tv for Arizonans. To be determined if it's on Extra Innings. Just our luck, with nobody watching he'll throw a no-hitter...