Share All sharing options for: Diamondbacks 1, Rockies 2: Lantern Shines, Offense Puts Him Out

Of starters with at least 150IP this season, Rodrigo Lopez ranks as the eleventh worst pitcher in baseball, judging by ERA+. Jimenez? Eighth-best. Using the same qualifications as above, Ubaldo has given up the fourth-least amount of home runs this year. Lopez? Why, he lands smack-dab at #1. I trust that the point's been made: going into the game, it was David vs Goliath (though, that may be severely understating the situation).

The eternal optimist probably would look at it as a "nowhere to go but up" situation - that is, anything other than a brutal beating would be a pleasant surprise. That being said, I'm not sure what to call his performance tonight, though I expect "completely unexpected" would suffice, as he went seven innings, giving up just two earned runs in the process. Though, such are your 2010 Diamondbacks, in the event a pitcher throws a gem, the offense has to make sure the opposition does, too. Details of the offense ineptitude and Lopez's nice night after the jump.

Rodrigo was, surprisingly enough, incredibly effective throughout much of the night. He cruised through the first six innings, keeping a shutout intact while only scattering four hits to that point. More impressively, though, is how efficient he was; through those six innings, he threw 49 of his 72 pitches for strikes, ringing up four in the process (let us take a second to laugh at one Toolo) to just one walk. It was largely stress-free, too: of the four hits the Rockies managed, the only real "threatening" one was a ground rule double by Seth Smith in the bottom half of the third. Past that, just three singles for Colorado, and only one of those batters ever managed to get to second. In the fifth, an Allen walk and Lantern single set the stage for a Stephen Drew double, scoring Allen, giving Lopez a lead it looked like he wouldn't relinquish (though, of course, the offense stranded both Rodrigo and Droo, something that proved to be a huge factor later on).

Thing is, baseball games are supposed to go for nine innings (not sure who made up a dumb rule like that- probably someone in the American League). After a groundout from Smith to start the seventh, the Rockies piled on three consecutive hits (knotting the game at one-all), the last of which being RBI single from Miguel Olivo that ended Rodrigo's night at 80 pitches. With runners on second and third and just one away, Sir Fiery brought in Mike Hampton for his third appearance as a Diamondback. Jonathan Herrera's sac fly to center put the Rockies up 2-1, a lead that was taken into the ninth. However, the offense did decide to finally do something of note at the latest possible moment. After Adam LaRoche popped out to start off the inning against Colorado closer Huston Street, Miggy singled to center and Upton was sent in to pinch-run. Justin stole second and Mark eventually walked, setting the stage for the incredible one-two punch of Parra and pinch-hitting Church to do their norm and provide some offensive fireworks. Just kidding, they're both pretty awful, and struck out to end the game. How's that for anticlimactic?

Despite being a loss, the game still provided a nice takeaway. Rodrigo Lopez obviously performed infinitely better than anyone of us figured he would - when you have the most home run-prone pitcher in the league (second-most in the Majors) go into Coors and escape with a line of 7IP and just 2ER and no home runs allowed, it's hard to be too down on the night overall. The bullpen lucked out a bit: Mike Hampton quieted a Rockies rally in the seventh, then allowed two baserunners in the eighth, followed by an Esmerling Vazquez scoreless inning (walking two and allowing a single). Something we can all agree on, though: the game was far, far more entertaining than last night's. 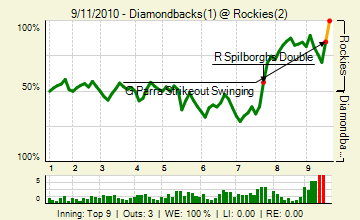 I called last week's GDT "deathly quiet", and I'm not sure how else to describe this one, as it managed less than 300 comments on the night. Maybe "frighteningly quiet" would work. Either way, 'Pitters continue to simply count on my recaps for their baseball goodness. Obviously. Hotclaws led the way with 57, with second and third going to DbacksSkins and Clefo respectively. Also joining the conversation: Wailord, Jim McLennan, brian custer, kishi, xmet, jinnah, soco, NASCARbernet, Sprankton, and blue bulldog. As for the Comment of the Night, I'll defer to the Voice of the People; hotclaws' five-rec'd comment led the pack, as she set the tone for the game before it began:

I’m bored, Lopez should DIAF, LaFail,oh,Parra!,why are we playing Abreu again? Dreeeeeeeeeeeeeeeeeeeeew,Oy,Oy,OY,I miss MarK.
There, got all my comments out of the way in one, so I can doze off if neccessary.

Young hurlers Ian Kennedy and Jhoulys Chacin square off tomorrow in the series finale at Coors, where the 'backs look to avoid a sweep and Colorado looks to win their tenth straight. Usually, out-of-contention teams play spoiler as a consolation. Looks like we're doing a real nice job.