If today was a glimpse of the future of the Diamondbacks, then that future is pretty damn bright. Barry Enright delivered another very solid start, holding the Padres to two runs over seven innings, and picking up the W as he ran his record to 6-2. Meanwhile, in his first game of the season, fresh off the bus from Reno, Brandon Allen hit a grand-slam in the bottom of the seventh inning, turning what was looking like a San Diego victory, into an Arizona one.

Enright and Dan Hudson, since the beginning of August, have a combined record of 8-1 and a 1.99 ERA in 12 starts covering 81.1 innings.. Right now, Opening Day 2011 can't come soon enough. Details after the jump.

As we suspected, it wasn't easy: very much a case of "anyone but Latos," with the Padres ace being as dominant and difficult to deal with as expected. In six innings of work, he struck out ten Diamondbacks, allowed four hits and a walk , and we managed only one at-bat with a runner in scoring position. However, Arizona were still in the game, thanks to Chris Young, who delivered his 23rd home-run of the season, a solo shot with two outs in the sixth, which tied the game at one apiece. However, the Padres took the lead again immediately in the seventh, a pinch-hit single proving key, and apparently vindicating their decision to lift Latos at less than 100 pitches.

On the other side of the coin, it was business as usual for Enright: far from dominating, but keeping Arizona in the game. The reports - I am still waiting for the replay to start on Fox Sports Arizona - were that the Padres had their share of hard-hit balls. But as always seems to be the case, they didn't result in many runs - a solo homer to the Padres' resident juicer and the tally scratched across in the seventh were all Barry conceded. He scattered nine hits over seven innings, though only two were for extra-bases and, equally important, with zero walks. San Diego seemed in a rush to leave us - after five innings, Enright had faced 19 batters and thrown a mere 42 pitches. 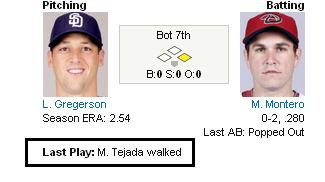 The bottom of the seventh perhaps showed why the Padres are so keen to leave, as this proved the turning point, in running their record to Chase at 3-12 over the past five series here. Their slim lead didn't even survive a single out after the departure of Latos before becoming a three-run deficit. I did a double-take of Gameday, as our half of the inning apparently started, as shown above, with a walk to... Miguel Tejada? Had we traded for him during the commercial break? Turns out Gameday was simply confused between Tejada and Mark Reynolds - I'm sure there's a universe in which that's an easy mistake to make, but I don't reside there.

However, it proved an omen of...stuff, as Tejada - now on our side - was charged with an error on what should have been a double-play ball from Miguel Montero. Instead of no-one on, two outs, we had two on, no-one out, and an infield hit from Gerardo Parra was botched by Everth Cabrera - apparently made nervous by the looming presence of his nemesis, Reynolds, on second-base - and loaded the bases for Brandon Allen. Allen was one of four September call-ups, and thrown straight into the fray, starting in left-field. Could he produce in the clutch? To quote Gameday, "B. Allen homered to deep right, M. Reynolds, M. Montero and G. Parra scored " To quote us: "Woooo!"

It was only the Diamondbacks' second grand-slam of the season, and since the other was with Arizona already a couple of runs up, probably counts as the most-dramatic. It's only the second time in more than six years (since Roberto Alomar did it in July 2004), when a D-backs grand-slam has turned a deficit into a lead - Chad Tracy performed the feat on September 26th last year. Coincidentally, that shot was also in the seventh inning, at Chase against the Padres - and really coincidentally, the opposing pitcher was the same in both cases, Luke Gregerson. What are the odds?

Having snatched the lead, we had to make our way gingerly through the last six outs. It didn't help that LOOGY Jordan Norberto walked the lead-off batter - he has now walked eighteen batters in only fifteen innings of work. Aaron Heilman then came on and allowed a hit, bringing the tying run to the plate, with no-one out. However, a nice strikeout and even more adorable double-play ended the threat. Juan Gutierrez picked up the save in the ninth, on eight pitches, with the help of another double-play. We faced 36 Padres and threw 101 pitches in total, the least in a full nine innings of work by Arizona in over two years. 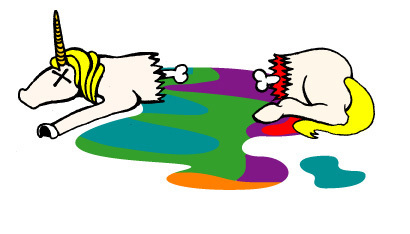 700 comments - not bad for a day game. justin1985 cracked three figures, with blue bulldog and Dbacksskins in 2nd and 3rd. Also present: IHateSouthBend, kishi, Clefo, AJforAZ, Wailord, morineko, snakecharmer, emilylovesthedbacks, BattleMoses, Bcawz, Skii, 4 Corners Fan, hotclaws, NASCARbernet, venomfan, Sprankton, blank_38, jryanwalters, SenSurround, Jdub220, Rockkstarr12, Dallas D'Back Fan, Muu, unnamedDBacksfan, asteroid and dbacks25. Looked like a couple of newcomers - perhaps lured by the mentions of the site on the broadcast yesterday and today, making it seems like a baseball equivalent of the Freemasons - so welcome to them!

Comment of the Thread came during discussion of suitable nicknames for Enright.

And now, one can only presume, "Brandon Mutherf****** Allen Yo!" too? A very satisfying end to the series, with Arizona getting to enjoy a well-earned off-day tomorrow. But there's something very special planned here, so check back in the morning for that...