Diamondbacks 7, Brewers 4: The Fails of Hoffman

Share All sharing options for: Diamondbacks 7, Brewers 4: The Fails of Hoffman

The Diamondbacks started their road-trip in Milwaukee, and some early wildness by Ian Kennedy threatened to cost the team this one. However, Arizona rallied for one run in the ninth and then took it to Trevor Hoffman in the tenth. The future Hall of Famer is now a shadow of his former self: he allowed three runs on three hits and a pair of walks, which provided the visitors with their margin of victory.

Details of this unexpected victory are in the usual post-jump location.

After we took the lead on a Miguel Montero single in the first, Kennedy immediately allowed three singles to tie things up, escaping with a double-play. This was followed ny a really ugly second inning, with such poor control, I thought he was injured. He hit a couple of batters, though in his defense, the Brewers did seem to be diving out over the plate - there's a reason Milwaukee leads the league in HBPs. He then threw a run-scoring wild pitch while walking Craig Counsell on four pitches to re-load the bases, but got the next man to swing at the first pitch, a hanging breaking ball. Fortunately, it went straight to Kelly Johnson, but it was the shape of things to come for him.

Chris Young's home-run in the third tied things up, and made him the first player in the majors to reach the 20/20 mark for homers and stolen-bases (the Rockies Carlos Gonzalez might be the next, currently two SB short). Hard to say how much further he might go, but only six Diamondbacks player have reached the mark before: Mark Reynolds and Justin Upton last year, Eric Byrnes (2006 + 2007), Young (2007) and Devon White (1998). However, the inning came to an unfortunate end with Johnson getting doubled off first, straying way too far off-base on what was just a routine fly to first. I thought Gibson had taken care of that kind of mental lapse?

More wildness from Kennedy followed, hitting Prince Fielder to lead things off - though the gravitational pull exerted by Planet Prince was involved, the ball having to make its way through the orbiting ring system to reach him. With the help of two more walks and a wild pitch, the Brewers scored two runs in the inning, with the only hit a single by their pitcher, which clanked off the glove of Stephen Drew. After three innings, he had allowed five hits, three walks, hit a trio of batters and thrown two wild pitches. The three HBP tied a franchise record, done five times previously, most recently in July 2008 by Micah Owings.

The Brewers "retaliated" in the fourth - though as such things go, this was a bit crap, simply throwing a pitch behind Rusty Ryal. Still, it was enough to get both benches warned by home-plate umpire CB Bucknor. Given there was absolutely no indication Kennedy's wildness was at all intentional, it was interesting to see how this would affect our starter. Curiously, it seemed to help him if anything, as Kennedy retired the next nine Brewers in order, including a nice strike-out of the Planet to finish the fourth. He even singled when hitting in the fifth, although Chris Young was robbed of extra bases by a leaping grab at the track in left.

Kennedy's final line: six innings, four earned runs - a lot better than it looked like it was going to be early on. Or as it's now known, "Pulling an Edwin Jackson." While he was still in the game, the Diamondbacks put men on the corners with no-one out in the sixth, and the run did score - but on a Reynolds double-play, making it a one-run game, yet killing the rally. Gerardo Parra was also robbed of extra-bases in the seventh, with a very nice running grab in left-center, and that was it for the Diamondbacks' hitting in regulation. However, Arizona tied it up in the ninth, on two walks, a bunt by Augie Ojeda and a Gerardo Parra ground-out.

[A quick aside. I don't know what Brewers' closer John Axford had on the bill of his cap, but it was pretty obvious, both its presence, and him grabbing it with his fingertips before each pitch. I was looking for a good picture to illustrate it, but haven't found one as yet. Didn't seem to help him too much, so I'm not inclined to make much fuss.]

Sam Demel pitched a scoreless ninth, and with one out, Kelly Johnson doubled off Trevor Hoffman. An Upton pop-out was followed by an intentional walk to Montero and an unintentional one to Reynolds loaded the bases. Drew then redeemed himself for his earlier gaffe, driving in two runs with a single back up the middle - he's 4-for-10 with two homers in his career against Hoffman, and Ryan Church added another run. Of course, the bullpen had to make it interesting, Aaron Heilman putting the tying run on base with one out. But a shallow pop-out and ground-out preserved the win, with the bullpen pitching four innings of scoreless work in relief of Kennedy.

The team managed just one more hit than Milwaukee. Montero had two hits and a walk, while Johnson, Drew, Upton and Reynolds each getting on base twice, in a variety of ways. However, Parra continues to struggle, being hitless in his last 18 at-bats. Seventeen of which ended in double-plays, I think. Though I didn't look that up, to be honest. It was only the second time this season that Arizona had rallied to win, after being down going into the ninth inning. The other game was when Manny Corpas of Colorado allowed two runs in the ninth on June 6th. It also was our first win in eight attempts over the Brewers. 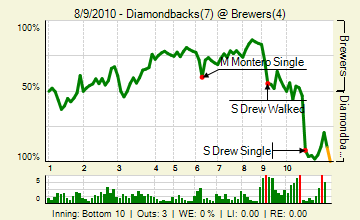 Almost 800 comments, with 'Skins, Jdub220 and justin1985 responsible for about half of those between them. Also present: unnamedDBacksfan, Clefo, DbacksSkins, piratedan7, BattleMoses, 4 Corners Fan, blank_38, kishi, ChrisHansen, marionette, emilylovesthedbacks, Jim McLennan, Rockkstarr12, Jack Cromwell, Sprankton, txzona, Wailord, asteroid, katers, AJforAZ, mrssoco and venomfan. Most red'd comment was the statement that fantasy talk in a GDT, during a one-run game, was just like doing the wave. But it was mine, so I have instead to go with:

We have a rally cat

We pet him backwards