What do AZ fans think of other teams? The results are in...

Share All sharing options for: What do AZ fans think of other teams? The results are in...

A few weeks back, we put up a poll to see what AZ fans think of other teams. Sorry about the delay in posting the results, but the Dan Haren trade and Mark Week combined to pre-empt these numbers - let's face it, there wasn't much actual hurry for them. But after the jump, you'll find the results, with all 30 major-league teams graded on a scale from one [unconditional love] to nine [undying hate]. Who's our second-favorite franchise? And who would we rather gouge our own eyes out than see in the World Series?

[Before we get started, a quick aside to the fans of other teams - particularly, it appears, Giants ones - who attempted to stuff the ballot-box. I'm not sure whether you're illiterate or just really, really dumb, but if you're going to vote in a poll for D-backs fans, then make it slightly hard to spot you, by not voting "9" for Arizona. Still, it took you twenty times as long to fill out the form as it took me to delete your response. Thanks for making it easy]

Masters of their domain

So it looks like a Yankees-Dodgers World Series would be the end of the world as far as we're concerned, with a Yankees-Giants one not much better. At least the former seems unlikely to happen this year, LA sitting six games back of the wild-card and in fifth place there. For amusement, here is the complete breakdown for all five times in the NL West, plotting ratings against number of votes. 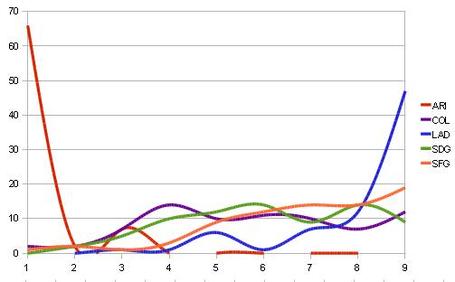