I didn't see any of this actual game, so if you're really, honestly interested in reading about that, here's the AP recap. Basically, Mat Latos shut out the Dbacks on two hits through six innings, Joe Saunders yielded 5 earned and 6 total through 6, (forgetting how to win, apparently), and Blaine Boyer and Rafael Rodriguez, making his Dbacks debut, combined for 4 runs through the final 3 innings. Boarding the bus to Reno was Joe Saunders, at -20.8% WPA, Adam LaRoche was the Badass of the Day at +3.6% WPA, going 0 for 1 with 2 walks, and Stephen Drew was the only other Dback in the black, with +2.7% WPA, going 1-3 with the only run scored and a walk. Mark Reynolds, making his return from HBP dizzyness, went 0-4 with 2 Ks for -6.4% WPA, and Miguel Montero was slightly worse, racking up -8.9% WPA despite having one of the Dbacks' 3 hits (1-4) and putting himself at the lowest WPA among position players. Chris Young went 1-4 with the game's only RBI, a double, off some Padres pitcher named Guy Fieri or Ernesto Frieri or something. At least Will Venable "Vegetable" went 0-1 with a flat 0.00 WPA.

So, would you REALLY like to read the details of that abomination, or would you like to hear about the game that occurred in my head? You would?? Excellent! It went a little like this...

The Dbacks put the hurt on the Padres' top pitching prospect today, lighting up Mat Latos and the San Diego bullpen for 10 runs, while Colonel Saunders was lights-out once again, shutting out the Padres through 6 and getting the W to sweep the division-leading Padres out of town.

Saunders had a no-hitter and faced the minimum through 3, demoralizing the Padres with a walk in each of the first three innings erased by double plays. Montero gets credit for the 3rd DP, as it was a K-em-out-throw-em-out with a caught stealing. Montero also threw out another baserunner in the 7th.

The Dbacks batted around in the 3rd, turning a 1-0 game (on a solo shot by CY leading off the game) into 7-0. It was a comedy of errors for the Padres, as Upton led off the inning with a double, misplayed by S. Hairston into an inside-the-park home run. The next two batters reached on a LaRoche walk, and a Montero single. Reynolds struck out but reached on a dropped third strike, and a Stephen Drew double cleared the bases, making it 5-0. Parra popped up for the second out, but Joe Saunders put the ball into play and it found a hole between Gonzalez and Jerry Hairston, Jr., and Chris Young's 2-run triple made it 7-0, Dbacks. Kelly Johnson struck out to end the inning. The boys in Sedona red then got two more runs in the 7th, off of Ernesto Frieri, when a LaRoche walk preceded a Montero blast.

After consecutive singles chased Saunders to leadoff the top of the 7th, putting runners on first and second, Gerardo Parra, who went 2-4 at the plate with an RBI and did NOT strike out or ground into any DPs, fielded a shallow flare into LF off Blaine Boyer that looked like it might be caught. Instead, it was Scott Hairston who was caught hesitating, as Parra gunned him down with a perfect strike to Mark at third. Ryan Ludwick grounded out weakly to Adam LaRoche on a grounder that was too slow to turn for two. However, after Kyle Blanks took third on a wild pitch, he took too much of a lead, and Montero was able to pick him off with a bullet from behind the plate. Boyer wasn't as lucky in the 8th, loading the bases on two walks and a single, and giving up the game's only run on a deep, deep sacrifice fly caught by Chris Young at the top of the wall, robbing Adrian Gonzalez of a grand slam. Jerry Hairston, Jr. took 3rd on the play, but another deep fly ball off the bat of Nick Hundley found Upton's glove, and the Jupzooka blew up Hairston at the plate to end the inning and any threat the Padres might have posed.

Mark Reynolds, making his return from fastball-induced woozyness, went 0-3 with 3 Ks his first three times up. Mark worked the count full his 3rd AB before taking a called strike 3 at least 6 inches out of the zone. That must have awoken Kirk Gibson's fieryness, because he came out to argue and got ejected for the first time this season. Mark rewarded him with a solo blast in the bottom of the 8th inning to cap the scoring.

Rafael Rodriguez pitched a perfect 9th in his debut in a Dbacks uniform, with two strikeouts and a popout to LaRoche to close this one out. DBACKS SWEEP PADRES FTW!!!!

I hope you enjoyed reading this imaginary recap. It was almost certainly more fun to read about than the recap of the ACTUAL game, wherein the Padres blew out the Dbacks 10-1 to prevent being swept in Phoenix. 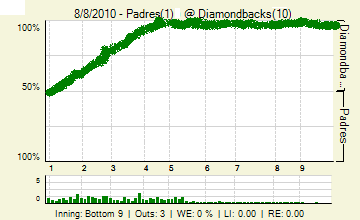 (switches to the paint drying channel.)

I'm working my way to grumpy old curmudgeon status with all the grace I can muster.

Now, if you'll excuse me, I believe Jim is waiting for me in a locked room with a cricket bat.