Luis Gonzalez saw his #20 retired by the Diamondbacks this afternoon, the first player in franchise history to receive this honor. But it was center-fielder Chris Young who provided the fireworks, opening the game for Arizona with a lead-off home-run in the bottom of the first, and then sealing victory by repeating the feat in the bottom of the ninth, this time with a walk-off shot. Our theory is that Aaron Heilman must have wanted tacos for dinner tomorrow, because it was the two home-runs he allowed in the top of the ninth, which tied the game for the Padres and set the stage for Young's game-saving blast.

And there was a SnakePitFest too. That, retiring the number of a franchise icon, and hanging another loss on the Padres (I thought they were supposed to be good?). All told, it was a pretty kick-ass day. Details after the jump.

People. It's only a frickin' bobblehead...

I kinda knew something was up when I left work at 3pm, a couple of blocks east of Chase Field - normally, two hours before a Saturday game, the streets are empty. Not today, with all the free parking spots already occupied. I walked towards the east side of the park, and saw the queue. The gates hadn't even opened, but it already stretched all the way around the side of the park. And that was the quiet entrance, the one no-one knows about. By the time I made my way through the throng to the front, the queues to get in were even worse. And this was, I repeat, over two hours before first pitch. Not seen anything like that since the 2001 World Series celebration party.

I didn't even bother joining the queue, but went and joined the table at Sliders', where Mrs. SnakePit had set up, with her tables and party favors, and some people had already found her. At least this time, we were in the shade, but it was still pretty hot and muggy; not my idea of fun to queue for a bobblehead, and I was happy to settle in, and hand out tickets to the masses as they arrived. In a remarkable show of efficiency, everyone who showed up was there in good time, and allocation of tickets went smoothly. There were a couple of no-shows, but that meant everyone got to sit together, even Mrs. Battlemoses, who joined the party only today. 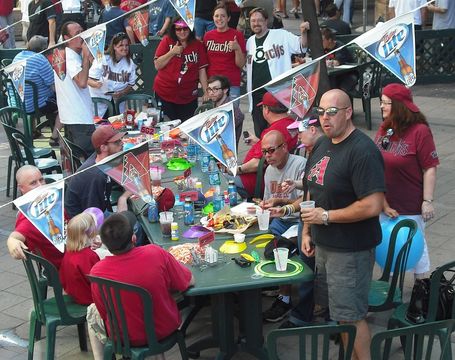 Because of the Gonzo retirement ceremony, we got into the park early, and took our seats - as with the earlier SnakePitFest, we were down the third-base line, above the Diamondbacks bullpen. The retirement ceremony was fairly short, and much as you'd expect - a video montage of clips from Luis's career, tributes from friends, colleagues and team-mates, etc. Gonzalez was also presented with a framed jersey and a large painting of "that" moment from the 2001 World Series, and his number was unveiled, high up above right-field, alongside Jackie Robinson's 42.

There were also tributes and highlights shown during the game. Interesting to note the reaction from the crowd to the various people in question. Loud ovations were particularly notable for Craig Counsell and Bob Brenly, while both old and new head honchos, Ken Kendrick and Jerry Colangelo were greeted with...well, broad disinterest would be closest. By far the least approval went, of all people, to Senator John McCain, whose appearance was greeted with loud boos from the sellout crowd [there were spaces, presumably the result of those seen leaving before the game, carrying armfuls of bobbleheads!]. Doesn't bode too well for his chances of re-election. 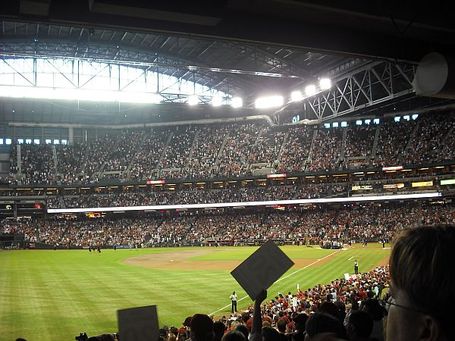 The full house shows their appreciation for #20

The game was certainly an experience. Learning from last time, we put the louder members (edbigghead, 'Skins, BattleMoses, etc,) in the front row, so they could heckle Padres' left-fielder Wil Venable - or "Vegetable," as he was referred to throughout the game. I have to say, he did seem to get off slightly easier than Ryan Spilborghs, who I believe still goes into a seizure anytime the words "Phoenix" or "Number NineTEEEEEEN" are mentioned. Still, we were definitely the loud section once again, and it was, as always, an absolute pleasure to watch the game with a bunch of enthusiastic, non-wave performing fans.

In the first half, it was all Diamondbacks. Young led off with a home-run, and we then scored four runs in the fourth inning - the highlight was a run-scoring wild pitch while the San Diego starter was attempting to issue an intentional walk to Stephen Drew. Oh, how we laughed until blood came out of ears at that - sheesh, even the Diamondbacks haven't quite sunk to such levels of ineptness. However, the 5-0 lead was reduced to two runs in the sixth, which got Rodrigo Lopez yanked, and the bullpen tasked with the job of obtaining the final dozen outs. It wasn't pretty, but they managed to negotiate the shoals and turn the ball over to Aaron Heilman for the ninth.

"Say what you want, but I like the way Heilman pitches." Thus spake Mrs. Snakepit - immediately before the lesser of the Hairston brothers launched one into the bleachers. One-run game. Two outs later, the medicine was repeated, though it seems this was in part due to a bad call prior to that, from the home-plate umpire. Regardless, the game was now tied, Gonzo's celebrations in risk of being derailed, and several winning attendance streaks also threatened. However, the angst which resulted lasted all of three pitches, Chris Young dispatching a 1-1 slider into the bleachers, to become the fourth player in 40 years to start and end a game with a home-run. 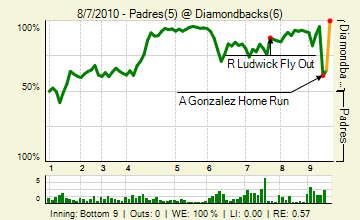 Given the usual suspects were at the game, 450 comments is not a bad total at all. Wailord led all posters with NASCARbernet and snakecharmer rounding out the top three. Also present: justin1985, piratedan7, Jim McLennan, BattleMoses, luckycc, blank_38, ZonaBacks10, Sprankton, morineko, emilylovesthedbacks, Clefo, dima1109, kishi, hotclaws, Azreous, txzona, sdp, i'moscar.com, Arizona via Slough, GuruB, azjazzman, unnamedDBacksfan, AJforAZ and misterx1978. It all got a bit bizarre post-game: apparently, Heilman blowing the save means Kirk Gibson is a better manager than AJ Hinch. Or something. Still working on that...

Comment of the thread was obvious, but will be published separately, as it deserves more than to be buried away at the end of a recap. Thanks a million to everyone who showed up: regular posters, occasionals, lurkers and those who we didn't get to sit with, but met before or at the park. As ever, it was a real blast, and it's a shame to think that we won't get to do that all again at Chase until next season. With three wins in a row, it means Tankapalooza gets retired as promised, and I'm hoping we can sweep the hapless Padres out of town tomorrow.