If you missed tonight's game, it's probably because it was completed in only 2 hours and 8 minutes. Diamondbacks starter Dan Haren Hudson took the mound tonight for his first home start in sedona red, against Jon Garland and his National League-leading San Diego Padres. Hudson handled the Mets easily enough for his first win, and tonight he proved he was not easily fazed by real major league hitters. Hudson allowed just one run over 7 2/3rds innings, besting the former Diamondback pitcher for his second win in an Arizona uniform. Details after the jump.

Daniel Hudson set the pace of this ballgame very early, shutting down the Padres batters 1-2-3 on 12 pitches in the 1st inning and only 6 pitches in the 2nd. He threw a terrific ballgame and made some very good hitters look very confused at the plate. Hudson said in his post-game interview that the key for him tonight was establishing his fastball early, and he did exactly that. He threw it with near pinpoint location, and mixed in a good number of sliders and change-ups to keep San Diego off base most of the evening. Both Miguel Tejada and Tony Gwynn Jr. tried to bunt their way on, and both failed miserably. Hudson's one mistake was a hanging change-up to Will Venable that ended up in the right field bleachers. He's still a fly-ball pitcher (11 fly ball outs tonight) and that's bound to happen in Chase Field, but give him credit for putting it behind him. He only allowed two other Padres to reach second base against him. Final line: 7 2/3 inning pitched, 96 pitches, 3 hits, 2 walks, 1 earned run, 4 strikeouts. He is now 2-0 with a 1.15 ERA and 0.113 batting average against as a Diamondbacks starter.

Hudson was supported by just enough offense this evening. Adam LaRoche led off the 2nd inning with a solo home run to right field to take a 1-0 lead, but Venable's home run in the 3th inning tied the game at one-all. With two out in the bottom of the 3rd inning, Stephen Drew and Kelly Johnson coaxed back-to-back walks out of Garland. Justin Upton made him pay by driving in Drew with a soft hit to right-center, and the Diamondbacks took a 2-1 lead they would hold for the rest of the evening.

Arizona had several more chances throughout the evening to add to the score. With two on and nobody out in the 4th, Gerardo Parra grounded into a double play. (For those of you keeping count, that makes... well, a lot. He leads the team in GIDP.) San Diego then walked Ryan Church to get to Hudson, but he struck out. In the 5th inning, the Diamondbacks put two men on with two out, but Miguel Montero flied out to left. Justin Upton easily reached base with a leadoff bunt hit in the 8th inning, but he was stranded. Daron Sutton noted during the broadcast that Arizona has only 3 base-hit bunts all season; for comparison, both Anaheim and Tampa Bay have 28.

Manager Kirk Gibson noticed by his location that Hudson was tiring in the 7th inning, so with a runner on and Adrian Gonzalez coming to the plate, he turned to lefty Jordan Norberto from the bullpen. It was a curious move, with Hudson seemingly doing well and Gonzalez hitting .317 against lefties this season. After a wild pickoff throw to first base advanced the runner, Norberto induced Gonzalez to ground out to shortstop and made Gibson look like a genius. Norberto lowered his season's ERA to 9.00, and has still allowed only 2 of his 15 inherited runners to score.

Gibson put in his best defense (Augie Ojeda at 3rd, Chris Young in CF) in the 9th inning and gave the ball to Aaron Heilman. Did you know the Diamondbacks have recorded only 3 saves since July 1st? Two from Gutierrez, and one for Heilman. Actually, make that two for Heilman, because he pitched a quiet 1-2-3 inning for the save and the Diamondbacks win and a two-game winning streak. 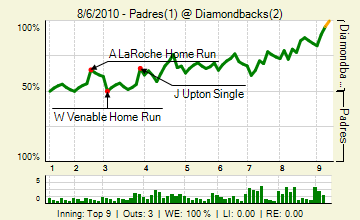 Pretty quiet gameday thread tonight, as we hadn't even reached 500 posts by the time the game ended. Once again nobody reached triple digits, but 16 of us were in double digits. justin led the way with 78, and Wailord and kishi round out the podium. All present were: Wailord, soco, Clefo, DbacksSkins, snakecharmer, justin1985, kishi, Rockkstarr12, Fiona, SeanMillerSavior, NASCARbernet, txzona, BattleMoses, Sprankton, Jim McLennan, Dallas D'Back Fan, Jack Cromwell, hotclaws, katers, Turambar, and blank_38.

I was begging ya'll for green comments tonight, and because I refuse to give myself Comment of the Day (even though soco made it green for me), it goes to blank:

upton shows gwynn and tejada
how to bunt for a hit.

Tomorrow night is SnakepitFest 2010 The Second. It is also, in case by small chance you live under a rock and haven't heard this yet, Gonzo's Number Retirement Night. I am definitely jealous of ya'll who get to be there for both. Enjoy, take lots of pictures!