There are times when I watch the game. There are times when I don't watch the game. And there are times like tonight, when the game is on the periphery of my consciousness. It's been on in the living-room - but I haven't actually been in the living-room much. This, to me, represents a comfortable middle way, balancing three hours wasted spent watching a meaningless game between last-place teams, and writing a meaningful and enlightening recap of the game. This is the stretch of the season where professional journalists like Messrs. Piecoro and Magruder earn their oats - grinding out the recaps down the stretch.

As for me, you'll get the details I can be bothered with after the jump - and you'll like it, dammit...

Barry Enright continued to show impressive form, both on the mound and in the batter's box. He allowed two runs in six innings of work, and is clearly learning from his more experienced brothers in the rotation - the runs came on a pair of Nationals homers. He has opened his major-league record with seven consecutive starts allowing three runs or less; the only guy to have gone deeper to open his career in the NL since 2006 was the Reds' Edison Volquez, who notched 15 straight in 2006. Enright does have some way to go to take possession of the franchise record, thirteen, posted by Brandon Webb in 2004.

Tonight, it was just those two runs over six from Enright, on six hits and two walks, with three strikeouts. He did have to work his way out of some jams, such as a second-and-third, one out situation in the second, while double-plays in the third and fifth also helped his cause. He threw 98 pitches, and his season ERA remains below three, at an impressive 2.81. After he left, Sam Demel allowed another solo home-run in the seventh and Esmerling Vasquez one in the eighth - this evening reminded me a bit of that game against Toronto, where our pitching staff allowed six homers, but they were all with the bases-empty, and we won 8-6. Aaron Heilman closed it out with a perfect ninth.

At the plate, Enright came up empty on a suicide squeeze attempt on the fourth, then drove in our second run of the inning, following a Stephen Drew RBI, with a single back up the middle. He came up with the bases loaded in the fifth, and reached when a third-strike in the dirt got away from the catcher. That was the Diamondbacks' third run of the inning, after RBI singles by Justin Upton and Rusty Ryal - pretty much the way the offense operated tonight. Only one of our runs scored on an extra-base hit, Bobby Crosby's second-inning RBI double. It's the third time this year tacos have been provided without a homer, and improved our record to 5-35 when we're kept inside the park.

Drew's single extended his hitting streak to a dozen games, thought as such streaks go, this is pretty weak sauce, with Stephen having totaled only thirteen hits over those dozen contests. Kelly Johnson had three hits and a walk, while Adam LaRoche also had a trio, and Rusty Ryal extended his good record when he gets in the line-up, with a couple more knocks. He has hit safely in 21 of his 25 starts, with an overall batting average there of .326. He ended up taking over at third-base, moving there from LF after Gerardo Parra came in, and started a nice round-the-horn double play to help bail out Vasquez in the eighth. 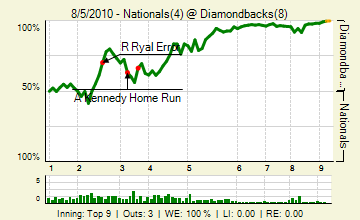 A broad, rather than deep, GDT, with no-one reaching three figures, but sixteen different people with fifteen or more comments. justin1985 pipped DbacksSkins, with jdub220 the other person above fifty. Also present: Rockkstarr12, BigPapaKishi, Jim McLennan, Sprankton, Azreous, 4 Corners Fan, snakecharmer, pygalgia, katers, emilylovesthedbacks, Clefo, kishi, hotclaws, morineko, Jack Cromwell, BattleMoses and NASCARbernet. Comment of the Night could go to some large image Clefo posted, but as it reduced the right margin to mush, it gets disqualified, in favor of this one from morineko:

point stands, don’t ever let Enright bunt. It may lead to runs, but it probably also leads to rips in the space-time continuum