Another week, another loss to recap. If this team hadn't made me numb to the whole process by now, this would probably hurt or something.

Craig Stammen -- yes, that Craig Stammen -- snuck through five innings, Adam Dunn hit two colossal home runs, and Mark Reynolds still seemed to be a little loopy as the Nationals crushed Arizona 7-2. For the strong of heart, there's more after the jump.

The Diamondbacks started in a 2-0 hole before they even got to bat in this one, and the uphill battle proved too much to overcome. They certainly had their chances, though. They got runners on the corners with nobody out in the first, and Upton drove in a run with a sac fly, but after a LaRoche single, Montero ended the inning with a double play. The next three innings were similar, yet Stammen escaped damage in all of them:

2nd: Two-out double by Church, Kennedy walk, but Young grounds out
3rd: Leadoff hit by Johnson, stolen base, walk by Upton, LaRoche ground out, Montero GIDP again
4th: Base hit and walk with one out, strikeout, groundout

From that point on, Arizona never got a runner past second base, with the exception of LaRoche's solo shot to lead off the eighth. By then, the Nationals were already up six, and the cause was lost.

Not much good for the pitching, either. Kennedy continued his struggles in the second half, giving up eight hits in four innings and striking out just two. Dunn tagged him for a couple of moon shots in that span. After seven shutout innings against the Braves in early June, Kennedy's ERA was 3.17; it's all the way up to 4.40 now. At almost 130 innings, one wonders how many more starts he'll get this year. Norberto and Heilman turned in scoreless frames out of the pen, and Boyer wasn't charged with any runs while getting two outs. But Carrasco and Vasquez were not so fortunate.

More noteworthy were the injuries. Drew was bleeding at one point thanks to an arm full of spikes on a fielder's choice. Reynolds struck out three times in three at-bats before being pulled -- all I can find at this point is that Gibson pulled him out, saying he clearly didn't look right. One can imagine that Mark, while certainly a trooper for playing the day after getting a welt that size, might have done himself more good by sitting a game or two with his team 47,000 games under .500. 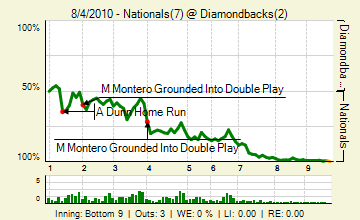 Notice, both of Montero's GIDPs show up on the graph. Johnson had three hits in a losing effort, but only three Diamondbacks were more than +3%.

Unlike the last couple times, I actually had more than one choice for Comment of the Night, which means I get to play favorites and stuff. As such...

Arizona is back in action against Washington tomorrow at 6:40, trying to salvage a series split. In the process, they'll also look to avoid setting another franchise low in attendance, which they did tonight: 15,670. Granted, there's not a ton of incentive for fans to come to the ballpark right now, but it's pretty indicative of how things are going for this team.