Share All sharing options for: Mark Week: The Hot Corner 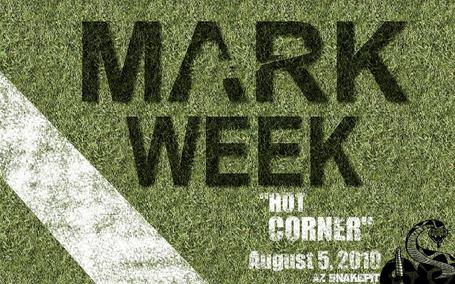 "When do you think Mark Reynolds is going to start getting Gold Glove consideration?"

The Diamondbacks were playing the Marlins in July when Mark Grace asked this question.  For once, though, our immediate response wasn't "Is Gracie already drunk?"  Instead, many of us agreed.  His point, of course, was greatly enhanced by the fact that Mark had just made a particularly nice defensive play.  But, more than that, our perceptions of Mark's defense have changed quite a bit this season.  After seeing Mark as an Adam Dunn-type player- a slugger who makes up for his poor defense with his mighty prowess at the plate- there's been a realization that it may not be true anymore.  Mark, who has been described as having "hands of stone" by even his most ardent supporters, looks like he's improved a lot on the field.  But do the numbers support that?  We'll check the stats after the jump, and take a look at some of his best plays on the field.

You want the short answer?  Yes.  His defense has gotten better over the past couple years. Now this is going to go into stats for a few minutes here.  If you aren't into the numbers, just scroll down a bit.  We've got links to videos of Mark's awesome defense down there.  It's cool.

Still here?  Okay.  Let's take a moment to look at a stat called UZR.  UZR stands for "Ultimate Zone Rating"- if you really want a long explanation, you can get one here, but the short version is statisticians divide the field up into 78 different zones, calculate how often a player should get a ball in those zones, and then compare how many times the player does get the out in those zones.  0 is an average player, negative numbers are bad, and positive numbers are good.  UZR/150 basically takes that score and averages it over 150 games, so you can compare players and seasons.  Fair enough?

So has Mark's defense improved by UZR/150?  In the most basic terms: for the first time in his career, it's a positive number.  He's gone from a -11.3 in 2008 to a -7.4 in 2009 to a 1.2 this season.  Yes, for the first time, the stats are showing Mark is playing as an above average defender.  Maybe not hugely above average, but a definite step up from his previous seasons.

This isn't to say that Mark is an all-star defender (yet?), but he's got some numbers that look pretty good.  For example, in the majors, on average, third basemen get outs in 65% of bunts they field.  This season, Mark is getting outs on 90% of the bunts he fields.  That's pretty incredible.  He's also getting opponents out more often- he's gotten outs on 86% of the balls he fields at third base this season, up from 83% last year.  His throws certainly seem more certain this season- he's only had 4 throwing errors, about one every 215 innings, compared to 9 throwing errors last year, one every 125 innings.  Sure, errors aren't necessarily the best way to judge a player's fielding, but it certainly seems to support a lot of what we see.

Oh, sorry, this is the defensive post.  Ahem.  Instead, here's ten of his best highlight reel defensive plays, showing that he's not just a threat to go deep.

Honorable Mention: If there's one play that comes to mind for Mark, that helped endeared him to many of us, it took place in San Francisco in April 2008, when he dove into a camera well to try to get a foul ball.  A great play, demonstrating that all-out hustle we love from him, but I didn't put it in the top ten for one reason: he didn't catch the ball.  But a great effort from him.

June 2008: Facing the Nationals, Dmitri Young hits a flare into shallow left.  Or it would have been a flare, except Mark hustles to make a great leaping catch to the cheers of the Chase Field crowd.

September 2008: Bases loaded, two outs, Randy "Evil" Winn is looking to do some damage.  Mark dives and slides about ten feet to catch a foul ball for the out- or, as the Giants announcer calls him, Greg Reynolds.  Top notch work, fellas.

April 2009: Against the Giants again- seems to happen a lot- Mark makes a great over-the-shoulder catch for the foul out and then tumbles head-over-heels.  The East German judge only gives him a 6.8 for artistic merit.

July 2009: Playing in Coors Field, a foul towards the seats.  He doesn't even bother slowing down before he hits the wall, tumbling into the stands but keeping the ball in his glove.

August 2009:  Last year, Mark dominated the Mets in Citi Field, both at the plate and with defense like this memorable play, leaping onto the tarp to catch a foul ball.  Even the Mets announcers seem impressed at how Mark shows "no respect for life or limb."

September 2009:  With the Giants visiting Chase Field, Andres Torres tries to bunt for a hit.  Mark will have none of that, and guns down Torres with a great throw.  He also proves he doesn't have to dive into the stands to sacrifice his body for the play.

April 2010: A high bouncer through the infield, but Mark makes a great leap to grab it and a good throw at first to get the runner.  It happens so quickly, but a great reach to even keep the ball from getting past him.

May 2010: Playing in Miami, the Marlins hit another high bouncing ball that takes its time getting to Mark.  In one motion, Mark barehands the ball and fires it to first just in time to get the runner.  A great play that he times perfectly, and the sort of play where he might have rushed and airmailed the throw last year or the year before.

June 2010: Troy Glaus hits a sharp grounder that deflects off Carlos Rosa.  Mark hustles in to grab the ball and fire it across the diamond in time to get the out.  A lot of great things on this play- Mark's reaction to get the ball, the way he's closer to horizontal by the time he throws, and Rosa's dropping to the mound to get out of the way of Mark's throw.

June 2010: Third inning, bases loaded, and the DBacks with a 1-0 lead.  A grounder to third, Mark fields it, spins, and fires a strike home to get the out and preserve the lead.  A gutsy, smart play, and one that helped build a special moment in Diamondbacks history: that was Edwin Jackson's no-hitter, and a game that the Diamondbacks won, 1-0.

July 2010: Playing the Padres, the Diamondbacks put the shift on against Adrian Gonzalez.  He hits a shallow pop-up right along the left-field line, and Mark hustles over from his spot near shortstop to make another great diving catch.  A great, full-extension leap, just the kind of effort we love to see from him.

So there you have it.  Mark may not be the greatest glove in the league.  He may be known best for his prowess at the plate, both at launching home runs and whiffing at high strikes.  But Diamondbacks fans know that Mark brings that same effort and heart to his defense that he does to everything, and he's getting better at it.

Tell me your favorite defensive gem by Mark.  I've obviously had to leave out some to keep it to a top ten- any that come to mind for you?

*The "terrifying truth" is probably that he's been practicing.