The D-Backs offense flexed some muscle and did all the right things to secure a win this evening. Unfortunately, that didn't sit well with the likes of Collin Balester. During a week of celebration and bowing down to Mark Reynolds, we have to take a small step back and hope that he's healthy after being hit in the head with a 95 mph fastball.

More details after the jump, along with some serious input as to whether or not Mr. Balester should be put in timeout.

The Colonel, Joe Saunders, came into tonight's game hoping to get his first win as a Diamondback. His hopes were punched in the gut early on, however, as Ryan Zimmerman homered to center field. Even before the 1/4 filled stadium had taken their seats the team was already facing a deficit. Saunders then took on a Liván Hernández-esque type of game, getting himself into jams but just as easily escaped them with an inning ending GIDP in the 2nd and 3rd.

The rest of the game looked promising though as Scott Olsen came into the matchup with an 8.86 career ERA against Arizona (in four starts) surrendering 18 runs and a staggering 30 hits over a combined 14 1/3 innings. The stats held true and the D-Backs took advantage of Olsen once again as Stephen Drew homered to left field in the bottom of the third inning.

In the following inning the birthday boy, and honoree of the week, Mark Reynolds deposited a 1-1 fastball into pool territory. With an Adam LaRoche single and Miguel Montero walk just prior to the homer, the D-Backs took the lead - 4-1. The game then flew by until it was the bottom of the 6th inning. With the D-Backs already having scored again thanks to a sacrifice fly by Montero, they were brewing once more with Mark Reynolds due up. Collin Balester relieved Scott Olsen and quickly drew a 1-1 count on the Sheriff. Then on the third pitch he threw a 95 mph fastball...

Mr. Balester now has two beanballs in his last three appearances to go along with his raunchy ERA+ of 64 (career of 72). One has to wonder how much longer you can put up with that sort of thing. As if he couldn't have picked a worse situation either? His team is down by four runs and he just beaned our power hitter who hit a homer earlier in the game. I can't even fathom that it would be intentional, but I wouldn't be surprised to see retaliation in the future. You can thank Joe West for that one. He decided to warn both benches after the incident. Great call, Joe, I'm sure the D-Backs won't consider a retaliation the next time they play each other with a different umpiring crew...

Anyway, the game went on and the D-Backs continued doing their 'thang.' Saunders worked another GIDP in the top of the 7th inning and Kelly Johnson knocked in the final run of the game in the bottom of the frame with a single to plate the ever useful Rusty Ryal. The Colonel went on to close the game; it was only the third by a D-Backs pitcher this year - by the way the other two no longer play for Arizona. He finished with a final line of 9 IP, 5 hits, 1 run (a solo HR), 2 BB, and 5 SO. Not bad, Joe. Not bad. 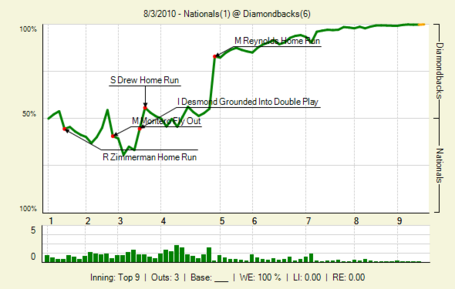 Kind of harsh on Montero there, he went 1-2 with an RBI and a run. Oh well, I guess someone has to take the honor.

Only one comment turned green, and that was a jab at me wanting the D-Backs to win games. So here's this instead...

fold bygones into other things, like cranes and stuff.

So we look to extend the streak tomorrow at the same place and same time. We'll see a matchup of two youngsters in Ian Kennedy (6-8, 4.26 ERA, 105 ERA+) pitted against Craig Stammen (3-4, 5.24 ERA, 79 ERA+). Ian Kennedy is struggling slightly as of late, while Stammen is coming off his best start of the season. Be there or... don't be there! It's up to you really.