Share All sharing options for: Diamondbacks 7, Padres 2: The Colonel cooks, and Reynolds delivers

A mere three batters into the game, after the Padres had gone single, homer, single, our win probability was already below 30%, and you'd have got pretty long odds against Joe Saunders going eight innings and getting the win. Yet, that's exactly what happened. Saunders became the second Diamondbacks pitcher this year to allow ten hits and still get the win (Edwin Jackson did it on April 11th), while Mark Reynolds provided the necessary offense, with three hits, two home-runs and five driven in, sending the Padres to their fifth straight loss.

He's now on pace for 38 homers and 99 RBI. "But he strikes out! A lot!" bleat the nattering nabobs on azcentral.com. Yeah, whatever. Details after the jump.

While the call to form a flash mob and storm Chase was still going out over the Twitterverse [see, I can speak the same language as the cool kids], the Diamondbacks did their own bit of storming, taking LeBlanc Mountain by strategy. Well, not that much strategy, if truth be told, unless you consider "whacking the ball hard" a subtle tactical maneuver. Stephen Drew led the game off with a single, Justin Upton walked, and Miguel Montero then brought them both home, tying the game with a double to deep center. Reynolds laughed politely, then clubbed an opposite-field homer to give Arizona a 4-2 lead.

More was to come in the third inning, with Reynolds going the more conventional route for his long-balls, to left-center, this time scoring Chris Young. And he capped his evening off in the eighth, with an RBI single. It's been a while for Mark: his first three-hit game since July 19, multi-homer game since May 1st, and the five runs driven in tied his career high, which he's done twice, most recently on June 12th, 2009. It was the fourth time in his career that Reynolds had nine or more total bases. He's had a miserable few weeks: since getting hit in the head on August 3, he had hit only .151 (11-for-73), so hopefully he's now back on track.

Meanwhile, the Colonel had also settled down a bit. Though given he allowed ten hits, and got some help from his defense on a few other hard-hit balls, it was not what you'd call a dominating performance - he only struck out two Padres. However, he didn't walk anyone, and that was probably key: it kept his pitch-count manageable. A couple of nice double-plays also helped out, and it took Saunders 102 pitches to get through the 31 San Diego batters faced. They were 0-for-5 with runners in scoring position, and didn't score at all after the second batter of the night. Saunders went eight, and Aaron Heilman polished off the ninth for Arizona.

Elsewhere in the line-up, there were two-hit evenings for Drew, Young and Montero, with Upton getting a hit and a walk. However, J-Up was replaced after striking out in the bottom of the seventh, with what Steve Gilbert Tweets was "right shoulder irritation." There's no more information at the moment, but it doesn't sound too serious for now. The victory guarantees the Diamondbacks a winning calendar month, something last enjoyed in August last year - we have a 15-13 record, with one contest left. If we can win tomorrow, it'll be the most for Arizona in a month since April 2008, when we had 19 victories. 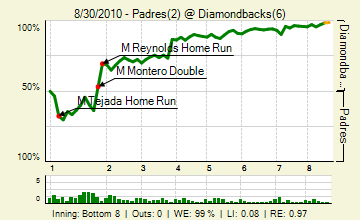 We cracked a thousand comments in the Gameday Thread: not seen that often in the second-half of the season. Amazing what some good starting pitching will do. A tough tussle at the top, but soco beat 'Skins 168-157, with Clefo back in third, just shy of a hundred comments. Also present: kishi, hotclaws, blue bulldog, Rockkstarr12, jinnah, xmet, 4 Corners Fan, pygalgia, BattleMoses, Dallas D'Back Fan, Wailord, AJforAZ, snakecharmer, NASCARbernet, Skii, mrssoco, LEDOUX, Jim McLennan, asteroid, Turambar, Husk, brian custer and GuruB. Comment of the Night goes to our newly-promoted author:

You don't just share a birthday with Kelly Johnson

he simply spared your life when you were born.

I think it's safe to say that after a bad start, this game got a bit better as it went along. And now, we've got the soft underbelly of our rotation out of the way, we can get back to the Hard Corps of Enright, Hudson and Kennedy. Is this... optimism I am feeling? Not sure. It has been a while...