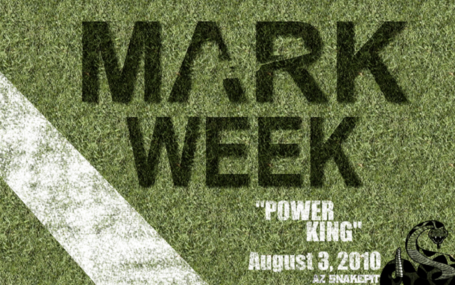 Want wimpy, lame hitting stats like on-base or low strike-outs or batting average? Well, you’re looking at the wrong guy, sugar, because Mark Reynolds is all about POWER and MASHING the damn baseball all the way to US Airways Center. It’s like he was created in a lab specifically to kill baseballs with extreme prejudice.

Now in his fourth year in the Bigs, Reynolds has racked up some pretty sick power numbers. Since debuting on May 16th, 2007, he’s gone yard 113 times. Only three other current players that are his same age or younger (26) have hit more: Hanley Ramirez with 116, Ryan Braun with 119, and Prince Fielder with a whopping 184.

Reynolds isn’t just known for getting little, gimme home runs like he was hitting towards the porch in Yankee Stadium. You can bet when a pitcher serves him up a tater that Reynolds mashes that mother into a creamy concoction with some butter and at least one 1 run on the board. Know where the Fatburger stand is in Chase Field? Yeah, he hit one to that. Know the Friday’s restaurant well above the left field bleachers? Yep, hit more than one into that.

It isn’t enough for Reynolds to just drive these balls a long way. No, when he feasts on a tasty, missed pitch he hits it with a swing that causes these homers to go far and high. He didn’t have that type of swing at first. By his second year, though, he had figured out to get under balls and just jack them out of the park. No line drive home runs for him.

A selection of his 5 highest home runs so far

So he hit’s a lot of dingers? So what? Well, I’ll tell you what. In 4 seasons Reynolds has jumped up to 3rd all time in the Diamondbacks’ home run leaderboard. At his current pace, he should be the all time D’backs home run king in another 4 seasons, and that’s assuming he doesn’t have a year or two with above average production. 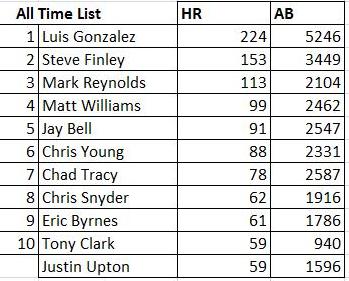 Okay, maybe the guy won’t win a batting title, or be in the Top 10 for slugging percentage, or not strike out a ton. But to long for these things, these things that are not Mark, is to not appreciate what we have: