Share All sharing options for: Diamondbacks 1, Nationals 3: Night of the Livan Dead

Ouch. No longer playing the New York Mets, the 2010 Diamondbacks returned to normal form this evening, being held to one run as the Nationals Livan Hernandez pitched into the eighth inning - and looked disgruntled to be relieved at that point, having only thrown 91 pitches. The man's mastery of BA on Balls In Play continued, as the Diamondbacks demonstrated an amazing talent to hit the balls at fielders, and while Rodrigo Lopez didn't pitch badly, two more home-runs were added to his league-leading total, and that was enough to tag him with the L.

So, Arizona still hasn't beaten anyone but the Mets since the All-Star break - our last victory over anyone else was all the way back on July 10th, since when we've gone 5-13, with all five victories over that time being against New York. Tonight, it was a lack of productive, or even patient offense which doomed Arizona. Hernandez and one Nationals reliever took a total of only 110 pitches to get through nine innings, 33 Diamondbacks batters averaging a mere 3.3 pitches per trip to the plate. Just once in the his past 26 starts had Hernandez gone past seven innings while walking just one batter - but that's what he did tonight.

Arizona's plate discipline and pitch recognition just seemed off tonight, for some reason. Few things illustrate that better than the two at-bats after the second inning where we had the tying run on base. They both came in the eighth, where a Tony Abreu single with one out was followed by a walk to Chris Young - the only one of the night. It was enough to get rid of Hernandez, and Kelly Johnson then worked the count full, before swinging at, and missing badly, ball four. Worse was to follow, as Justin Upton's hitting streak ended at 17 games, not with a bang, but a whimper, as he took a hack on a 3-0 pitch, and grounded weakly out to the infield.

The Diamondbacks scored their run in the second, after singles by Mark Reynolds and Stephen Drew, again with one out. Mr. GIDP, Gerardo Parra, then followed up with another ground-ball, although this one did at least bring home a run. All told, we had six at-bats with runners in scoring position, and failed to get a hit, though in our defense, two of them were with Lopez at the plate (and the results were not exactly Haren-esque - or even Hudson-esque). Drew was the one Arizona batter to reach safely more than once, with two of our five hits tonight, all of which were singles.

Lopez allowed three runs in seven innings of work, so it's just another Quality Loss for the Diamondbacks - the team are now 22-26 in games where their starter gives them a Quality Start. However, it was probably true to say that Lopez worked in and out of more trouble this evening than Hernandez, the master of such things. Rodrigo allowed seven hits and two walks, and would have allowed more than one run in the first, if he hadn't picked the leadoff man off first, as he then walked the next two batters and allowed an RBI single later in the inning. A nice play at the plate in the seventh by Miguel Montero also saved Lopez a run.

But it was a pair of solo homers, in the second and third, that provided Washington with their eventual margin of victory. With a full two months left, Lopez already has 27 homers, good enough for 11th on the franchise single-season list. If we give him ten more outings - and with Enright and Kennedy likely being shut down in September, it seems pretty likely - that rate would put him on pace for a full year total of 39. It would tie Brian "Ow! My face!" Anderson's record, set in our debut season of 1998. Four NL pitchers in history have ever allowed 40 in a season - Eric Milton (twice), Jose Lima, Phil Niekro (twice) and Robin Roberts (three times). So that's something to shoot for. 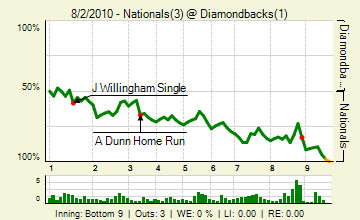 529 comments, with DbacksSkins driving things, just ahead of Jack Cromwell, and justin1985 in third the only other person to break forty. Also present: Jim McLennan, BattleMoses, katers, hotclaws, kishi, 4 Corners Fan, Rockkstarr12, pygalgia, snakecharmer, emilylovesthedbacks, Turambar, Cup Noodles, txzona, Tim Weiss, Scott Howard, marionette, venomfan, Bryan J. Boltik, Dallas D'Back Fan and mrssoco. There was exactly one green comment tonight, by 'Skins, and I had to beg for that. Seems appropriate it is in no way related to the game.

Everytime I step outside my place at night,

there are geckos hanging out on my wall.

And then they try to sell me insurance.