Having mauled Timmeh last night and sent him packing, lip a-quiver, this evening we did even worse, facing the second-best pitcher named "Barry" to start in this series. Aided by some highly-amusing defense in the first, we walloped Zito for nine runs in a mere 3.2 innings of work: only once in 347 starts has he allowed more runs in a game. The 5-6-7 hitters in our order, Adam LaRoche, Mark Reynolds and Miguel Montero, each drove in three as the Diamondbacks won their third consecutive blow-out victory. After a shaky start, Dan Hudson went his customary seven innings, and his ERA for us is still sub-two.

No more Tankapalooza, at least for a bit. I like this whole "outscoring the opposition 28-8 in three games" thing.

Just as last night, the Diamondbacks rolled offensively early, sending eleven men to the plate in the first inning. We had the bases full of Arizona batters three times in the inning, and took advantage on each occasion. Adam LaRoche had an RBI ground-out, and after we reloaded them, Miguel Montero cleared them with a double to the wall in left-center. Zito walked Ryan Roberts to get to Hudson - and promptly hit him on the foot to create more gridlock. Stephen Drew hit a high pop-fly to shallow right, but Jose Guillen butchered it horribly, and two more runs crossed home. Now I know what other teams felt like when we were at our most wretched.

The rest of the damage against Zito came courtesy of Mark Reynolds' 29th home-run of the season, a three-run shot which was totally called by me, not moments before [signed affidavit of verification on file from Mrs. SnakePit]. A petulant Zito then plunked Miguel Montero, the next batter, though he's such a has-been these days, it must have been like getting mugged with a marshmallow. [Hudson extracted retribution later, pinging one off Aaron Rowand's midsection in the seventh.] That was his night done, and we continued our ownership of Zito: he's 3-7 against us, with a 5.33 ERA.

That was the scoring over until the ninth, when LaRoche delivered his second splash hit into McCovey Cove in as many nights, this time a two-run shot. There have only been 22 hit by opposing players all-time - LaRoche has three of them, tying him with Carlos Delgado for the all-time lead. LaRoche had one as a Pirate, and now has two of the six by Diamondbacks: Gonzo had a couple, with the others by Mark Grace and Miguel Montero. Adam was the only D-back with more than one hit, but Chris Young walked three times and scored three, Mark Reynolds had two walks in addition to his homer, while Kelly Johnson and Ryan Roberts each had a hit and a walk.

Hudson did not have his best stuff, particularly early on, and was bailed out by a trio of fine defensive plays in the second and third, opening with a Roberts dive into the stands to grab a swirling pop foul. The biggest was perhaps later the same frame after the Giants had loaded the bases with one out. Johnson snared a liner off the bat of Zito, and alertly got his toe on the back before the runner on second could get back, for an inning-ending double-play. And with two men on base in the next frame, Reynolds made a great snag of a ball down the line that would certainly have helped to make a game of it. Young also had a very nice grab to end the fourth.

Our starter did buckle down, and got through seven innings for his sixth straight game, allowing two runs on four hits and two walks. All told, that means in 43.2 innings since joining Arizona, he has allowed only 30 hits and eight walks - that's an 0.870 WHIP. He and Barry Enright have now combined to make 17 starts, with a combined ERA of 2.21. That's basically half a season of Cy Young worthy-pitching [and I don't mean former Cy Young worthy, like the Giants have been kind enough to provide for us on Friday and Saturday], and any improvement in the team's fortunes of late seems entirely built on their back. It certainly gives hope for 2011. 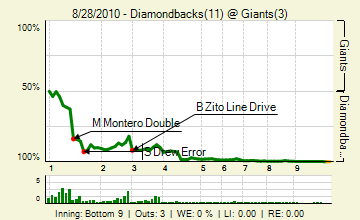 840 comments in the thread, with soco the man to beat, delivering 120 of them. Second was AJforAZ, who deserves especial kudos for posting all night possessed by the spirit of an azcentral.com commentator. Though it has to be said, the illusion was somewhat spoiled by his comments being grammatically sound and demonstrating a knowledge of the Shift key's proper usage. hotclaws was third and also present: NASCARbernet, emilylovesthedbacks, Rockkstarr12, Jim McLennan, unnamedDBacksfan, jinnah, blank_38, asteroid, DbacksSkins, kishi, blue bulldog, piratedan7, BattleMoses, Bcawz, Wailord, mrs snakepit, morineko, marionette and mrssoco

Forgot to pick Comment of the Night. Got to give it to AJforAZ, for his marvelous, if chillingly plausible overall, portrayal of an ignoramus. Here's a sample. Just, please, don't do it again...

if we just had ownership that wasn't so cheap

the umps would give us that pitch. But Kendrick and crew is more worried about bobbleheads than paying umps to make this team better

Finally, it rained a bit here today, shall we say. Here's a picture of the street and entrance to our house when we came home from work. We had to paddle to the door, and when I was dispatched back to the car to pick up Mrs. SnakePit's vitamins, I felt like a doctor from Medecins Sans Frontieres, wading through the floods to bring much-needed medical supplies to an underprivileged area. I am pleased to report, the waters are now receding. I think I saw a dove out there with an olive branch in its beak. 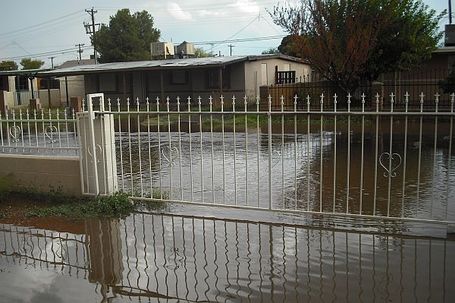 Assuming our ark stays afloat for the night, I'll be back in the morning with SnakeBytes, and let's complete the sweep with another victory over the Giants tomorrow. Though since we're not facing a Cy Young winner, I'm a bit less confident...