After sending Ubaldo Jimenez packing in his last start, Barry Enright chewed up and spat out double Cy Young winner Tim Lincecum this evening, shutting the Giants out for seven innings. Meanwhile, Adam LaRoche swatted a three-run homer as part of the opening frame, splashing down to McCovey Cove, and that was enough to leave Timmeh staring at an 0-5 record in August. The Diamondbacks didn't do much damage until the ninth thereafter, but Enright's performance was again hugely impressive, and fully deserved his fifth win.

Enright's line: seven innings pitched, six hits, two walks, four strikeouts and no runs. The more I see, the more convinced I am his pitching smarts are the real key here. They act as a "force multiplier," enhancing the effect of stuff which remains moderate rather than spectacular. Tonight, he again out-thought the batters, in particular Buster Posey and Pablo Sandoval, who went 0-for-7 and basically got schooled. Enright profiles as a fly-ball pitcher, but it seems when he has runners on base, he goes more to a two-seam fastball, hoping to generate a ground-ball double-play - and that's exactly what happened after a lead-off single in the Giants second.

He also doesn't get flustered; that could have been the case in the third, when San Francisco had men on second and third with no outs, and threatened to make it a game, with the top of their order coming up. Enright provoked a pop-up to Mark Reynolds, and then Busted Posey inside, getting a feeble ground-out to Adam Laroche. The fifth was the last time the Giants got anyone in scoring position against our starter, and it took a fluky bounce off the third-base bag to achieve that. But DestroyedBeyondHope Posey struck out swinging. And that ended his night, Bruce Bochy replacing the rookie, made to look very mediocre in tonight's contest, with a pinch-hitter in the eighth.

On offense, the Diamondbacks did almost all their damage early and late. They took advantage of some early Timmeh wildness, as he struck out the Arizona side in the first; fortunately, scattered between those three K's were two walks and LaRoche's majestic blast down the right-field line [there was some suggestion Stephen Drew, on second, was stealing signs - which makes it even more amusing, if true]. There were chances for us to add on after that, with Lincecum pretty human, but the only damage was Justin Upton bringing home Drew with a sacrifice fly, after the latter led off the third with a triple.

Add a ninth-inning double, and on this road-trip, Drew is 9-for-18, with all nine hits being for extra bases: five doubles, a triple, and three homers. I'm not sure how to find out when the last time a player had nine consecutive extra-base hits, without a single, but it's got to be kinda rare. The only comparable streak I can find in D-backs history, is by Steve Finley from September 4-9, 1999, when he went 10-for-23 over five games, with four doubles, a triple and five homers. Kelly Johnson had three hits, including a two-run double in the ninth, while Upton and LaRoche each had a hit and a walk.

That makes consecutive, very solid performances from Arizona, with six-run margins in both games, and a total of fourteen shutout innings from our starters over the contests. If you are thinking it has been a while since we've enjoyed consecutive blowout victories, you'd be right. Almost exactly a year, in fact: August 27-29 last season, we beat the Giants 11-0 in SF, then defeated the Astros 14-7 and 9-0 at Chase. The last time we enjoyed back-to-back margins of six on the road was even longer: June 17-18, 2009, when we doubled up on the Royals, 12-5. One more victory tomorrow, and Tankapalooza will get put away for a bit. 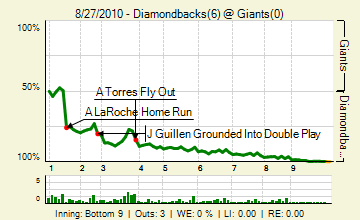 I'm tempted to give soco's ringing endorsements for RE4 Comment of the Night - and post the trailer for it again. However, the award goes to kishi for his comment when Juan Gutierrez entered the game after our potent ginge 1-2 punch of Enright and Boyer:

He’s gonna look really weird after they dye his hair.

See you tomorrow: 6:05 pm first pitch, so another somewhat odd start-time. Hudson vs. Zito for that. And, because you thought I'd forgotten, Pitcher A was Brandon Webb...