Well, it was a billion to zero, but then, after Ian Kennedy one-hit the Padres for seven shutout innings, the bullpen - and, in particular, Sam Demel, decided to get into the act. It didn't stay a billion to zero for long. Still, you don't get any additional points in the win column for a shutout, and the massacre which preceded that bump in the highway was largely pleasant to watch. Or would have been pleasant to watch, if it had a) not been an afternoon game, and b) been on television. Of course, turning it off after Kennedy left the game would have enhanced the warm, glow-y feeling.

Details after the jump. You'll forgive me if I mostly concentrate on the good stuff.

Good stuff. Yeah. Let's talk about that. Ian Kennedy, FTW, seriously. Seven innings, only allowed a two-out single in the fourth, and struck out a dozen San Diego batters, tying a season high for an Arizona pitcher. He hit one batter and walked two more, both as part of a somewhat wobbly first, but struck out the side around those free passes. Kennedy was basically regal after that point, facing three batters over the minimum and taking a mere 105 pitches to get through seven innings. After looking a bit tired out, with a 5.79 ERA in five starts over the month prior to this afternoon, it's good to see him turn in what was probably the best start of his career.

Heck, an 85 Game Score ties Edwin Jackson's no-hitter for the best by us this year [obviously, the latter is docked for serious wildness]. There's just one better start since 2008 by an Arizona pitcher: Dan Haren's complete-game four-hit shutout of Florida in July last year. Esmerling Vasquez got the last two outs of the eighth, and Aaron Heilman worked a scoreless ninth. However, Demel retired one of seven batters faced, allowing a grand-slam to Adrian Gonzalez,. and what marionette described as "Montero threw one in the back of Denorfia, during a rundown, after Demel "got greedy" and didn't just throw out the man at first after a lucky behind the back stab of a grounder." Ok.

Moving from there swiftly on to the offensive side of things. Stephen Drew certainly doesn't seem to believe that Petco is a pitcher's park. He finished series there having gone 7-for-14 with all the hits going for extra bases - three home-runs and four doubles. Drew homered in the third, a three-run shot, that made it 4-0 after Chris Young singled home Justin Upton in the first, to give us the lead. It was the fourth innings where we blew the doors off this contest: Drew and Upton each had hits to drive in runs, and Young then greeted the Padres bullpen with a bases-clearing double, making the score 9-0. Mark Reynolds had a two-run homer, his 28th, in the seventh.

All told, the Diamondbacks punched out sixteen hits. Upton and Gerardo Parra were responsible for three apiece, while Drew, Upton and Miguel Montero each got a couple of hits. Drew and Young both drove in four runs. Arizona should probably have scored more, but for a bizarre bit of baserunning in the fifth - somehow, we managed to hit back-to-back doubles which not only failed to score, but left the bases empty. Montero led off with a double, and Parra then just missed a home-run off the wall in center. Montero got caught in a run-down between third and home, and Parra between second and third. Had we not been nine runs up at that point, I might be upset.

Good for the team though, snapping our losing streak in San Diego at nine games, and avoiding a sweep at the hands of the irritating Padres. It never ceases to amaze me how this team can go from playing such wretched baseball for two games, to seeming so unstoppable the next afternoon. That's baseball, I suppose. 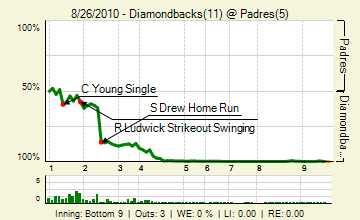 For what it's worth, Demel's contribution only reduced our win percentage by 0.6% - if you stare very hard at the picture above, you can just see the blip in the second-half of the eighth. In the thread, NASCARbernet led all posters, and was the sole one to break 50. hotclaws and kishi followed up, with others present being Wailord, jinnah, snakecharmer, Jim McLennan, Clefo, DbacksSkins, dbacks4life, morineko, 4 Corners Fan, unnamedDBacksfan, blue bulldog, piratedan7, Rockkstarr12, BattleMoses, Azreous, asteroid, marionette, Jdub220, Bcawz, AJforAZ, GuruB, emilylovesthedbacks and justin1985. Comment of the Thread is piratedan:

getting a teenager to clear their room. Sometimes it only happens once a week and even then its with so much unneccesary melodrama that you think you’re watching a 70’s soap opera.

We now head off up to the coast to the less smelly end of California, to see if we can hang a fifth straight loss on Timmeh in San Francisco. Naturally, it's Barry Enright who gets to face the opposing staff's ace. See you tomorrow for that.