Diamondbacks 3, Padres 9: Please hold. Your recap will be arriving shortly.

Share All sharing options for: Diamondbacks 3, Padres 9: Please hold. Your recap will be arriving shortly.

Not sure what happened here. I can only surmise that Azreous was:
a) Possessed by the spirit of 'Skins, and the recap is still "in progress",
b) So depressed by the game, he is lying in a Flagstaff gutter,
c) Diligently working on an in-depth feature on the electoral tussle for Mine Inspector, or
d) All of the above

I'll whack something up in a bit, cobbled from usually-reliable sources. Anyone who actually watched the game - and thus might be able to offer some more informed opinion - please feel free to chip in.

First, the good news. Stephen Drew bookended scoring for the game, with a pair of home-runs. The first required the umpires to put their heads together; they reviewed the play and decided the ball had actually clanked off a seat in the bleachers and returned to the field. He then added another shot in the seventh. I was surprised to hear that this was actually Drew's first mult-homer game, despite having hit 58 prior at a good rate, one every 10.6 games. Not many active players had more in their career without two in a contest. I think the leader is Jason Kendall, who has 75 homers in 75 different games. Mike Lamb has 69 and David DeJesus 61.

Drew also added a pair of doubles, giving him four extra-base hits for the night. That ties a franchise record, with Stephen becoming the seventh player to do it - most recently,. Mark Reynolds in June last year against Houston. Drew had actually done it before, on September 1st 2008 playing St. Louis. That was the day he hit for the cycle, but also added a second double, as part of a 5-for-5 appearance. The dozen total bases were tied for sixth on the Arizona all-time list, and has not been surpassed in over three years: Reynolds had 13 (two homers, a triple and two singles) in June 2007, also versus the Astros.

That's pretty much the end of the good news in this one, even for Drew. For he also committed a key error in the third, booting a ground-ball which helped lead to a four-run inning for San Diego. That turned a 2-1 game into a 6-1 lead for the Padres, and - unlike their divisional rivals in San Francisco and Colorado managed yesterday - the Diamondbacks showed little inclination to stage a fightback. Drew had more hits than the rest of his team-mates combined: Adam LaRoche and Rusty Ryal each had a single and a walk, and Kelly Johnson the other hit. John Hester went 0-for-4 with three K's and is now at the Uecker line.

Joe Saunders wasn't very good. Even allowing for the three unearned runs allowed, he still was charged with six in four innings, on eight hits and three walks. Yeah, a WHIP on the night of 2.750 is going to get you the L more often than not, and so it proved. The Colonel now has a record of 1-4 in his six starts for the Diamondbacks, along with an ERA of 5.21. As with Rodrigo Lopez, he fell victim to the long-ball: five of the six earned-runs allowed came on home-runs by Miguel Tejada and Adrian Gonzalez. Saunders had already allowed eight homers in 38 innings with Arizona, so is clearly intent on making up for lost time.

The bullpen mopped up decently, with four scoreless innings. D.J.Carrasco followed up his 1.2 scoreless innings in the opener with another two zeroes last night. I imagine we'll try to avoid going to that well again this afternoon. Esmerling Vasquez and Juan Gutierrez each allowed a walk in their inning of work, and Vasquez hit a batter. However, there was no other damage, and the Padres didn't take advantage. On the other hand, they didn't really need to, at that point... 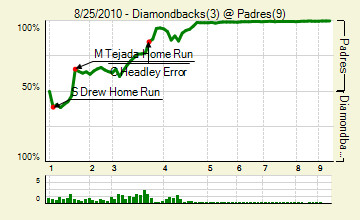 Almost a thousand comments, despite the game largely sucking. soco delivered a Drew-like output, getting past 200 for the evening: justin1985 reached a hundred, kishi fell just short. Nice to see a couple of fresh faces in LEDOUX and Sadclownface - welcome to both. Also present: jinnah, mrssoco, emilylovesthedbacks, Rockkstarr12, DbacksSkins, Wailord, Clefo, AJforAZ, blank_38, hotclaws, BattleMoses, Dallas D'Back Fan, 4 Corners Fan, snakecharmer, marionette, unnamedDBacksfan, blue bulldog, NASCARbernet and Jack Cromwell. Only a couple of green comments, and we'll give Comment of the Night to AJforAZ, with his multi-media presentation:

for your enjoyment, I present to you a rally diamondback who like our offense, is fast asleep.

Afternoon game today - bizarre start time of 3:35pm. What is that all about? I'll be back with the GDT for that in due course.