Diamondbacks 0, Padres 5: Do Not Adjust Your Set

Share All sharing options for: Diamondbacks 0, Padres 5: Do Not Adjust Your Set

I must confess, I had to give up watching the game tonight. Our Cox cable connection was proving incredibly choppy, so you'd be watching a pitcher go into his wind-up, then it'd freeze... And the next thing you'd see was the ball heading towards the outfield. If it had been a more interesting game, we'd probably have made a greater effort, but by the time the Padres took the lead, it was already fairly clear the Diamondbacks offense was not going to show up. And so it proved, with Arizona managing nothing off Richard and a quarter of Padres relievers.

Rodrigo Lopez continues to give up homers at an impressive rate. Well, fans of the opposing team are impressed - we here in Arizona are more likely to sigh deeply. A pair of two-run shots were easily enough offense for the Padres this evening, with Lopez not even managing to get through five innings this time. He allowed nine hits and a walk in 4.1 innings, striking out just one batter, and allowing five runs, all earned, which puts his season ERA on the wrong side of five, and his number since the break at 6.90. However, with Kennedy and Enright heading towards their limits, we'll likely keep rolling Lopez out there there rest of the way.

Oh, and I'm not being facetious about the first home-run being "Game Over". Lopez has now allowed home-runs in 21 starts this season: he has got the W in one of them, the July 8 contest against Florida, where we won 10-4. The two souvenirs provided tonight give him 32 for the season. Since 2000, only one pitcher has allowed more than Lopez, up to this point in a season: Eric Milton, who allowed 33 in 2004 and 35 the following year. Is he tired? Has the rest of the league finally realized who he is? ["Oh, that Rodrigo Lopez..."] Hard to say. I don't think the team will have much interest in re-signing him for 2011, having seen how he has worn down.

Speaking of worn down, brings me nicely to the offense, which managed only a feeble five hits, and were unable to take advantage of some wildness by Richard, who walked five Arizona batters in his six frames of work. We had some chances, putting two men on base in the first, third, fifth and seventh innings, but Adam LaRoche and Chris Young were fanned to end the first couple of chances, while Kelly Johnson flew out and struck out, on the latter occasions. All told, we left ten men on base: Justin Upton had three walks and a hit, while Chris Young had two bases on balls.

I feel I should say more about this game, but I really can't think what else there was of much interest. Ryan Roberts did make his first start since being recalled, but went 0-for-3 with a couple of strikeouts. The bullpen were pretty decent, pitching 3.2 innings of one-hit ball: D.J. Carrasco, Blaine Boyer and Jordan Norberto were the men on the mound for that. Good to see Carrasco put things together - and in particular not walk anyone. he's now allowed five runs in 10.1 innings, a respectable 4.35 ERA. However, the K:BB ratio is 8:8, which is still way too high for comfort. 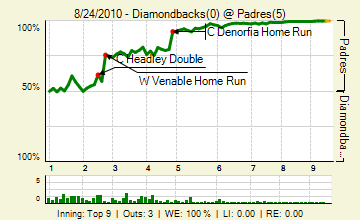 Over 600 comments in the thread, though shy of twenty active participants. justin1985 cruised into three digits, with kishi and Clefo second and third respectively. Also present: Azreous, jinnah, DbacksSkins, blank_38, Rockkstarr12, Jack Cromwell, hotclaws, 4 Corners Fan, Skii, Wailord, Husk, Beegee25, snakecharmer, brian custer, marionette and Jim McLennan. Doesn't look like any comment was deemed worthy of more than two recs, so seems we didn't really bring our "A" game this evening either, much like the Diamondbacks. Comment of the Night?

someone rubbed the Lantern to get out of that

It was the tenth time the season the Diamondbacks have been shut out. Insert "Get 'em tomorrow"-type comment here, I presume.