Your attention please. Back in March, a story appeared on Purple Row in which one of the staff  wrote, "I am guaranteeing a NL West crown for the Rockies this year... The Rockies are the best team in the division." This piece contained a small error, and was not up to the high standards of typographical accuracy to which this site aspires. It actually said, "I am guaranteeing a stiff battle for fourth this year. The Rockies might - just might - avoid a losing season." doubleplusungood rewrite fullwise upsub antefiling.
-- official statement, Ministry of Truth (Purple Row department)

I had a moment of revelation in the ninth inning tonight, when I came to a realization that I really wanted Arizona  to win. The shriek which escaped my lips when Juan Gutierrez got the final out, proved beyond a doubt that Tankapalooza is clearly just a coping mechanism, allowing me to divert the pain caused by a loss in a positive direction. No matter what I may say, It's still a million times a better feeling when the Diamondbacks pull out a win - and all the better to do so against the opposition ace, in front of a raucous and fully-engaged Chase. Meaningless? Perhaps. But this one was one of the sweetest victories of the season.

Barry Enright has faced some of the most renowned names in baseball during his debut season. He fought double reigning Cy Young winner Tim Lincecum to a stalemate in July, leaving the game after six with the score tied at two. Last time out, he matched the most hyped pitching prospect of the decade, Stephen Strasburg, leaving after five with the score tied at three. And tonight he out-pitched Colorado ace and seventeen-game winner, Ubaldo Jimenez, giving up one run, and allowing the same number of hits as Jimenez - a mere three - while retiring two additional batters, and striking out more hitters too.

Ten starts in, Enright has a 2.73 ERA, and has yet to allow four runs in a start. Let's not understate what he has done. In over sixty years following the integration of baseball. in 1947, one other pitcher in the major-leagues has started his career with ten consecutive games throwing five innings or more, and allowing three runs or less. Steve Rogers of the 1973 Montreal Expos. No, let's give this feat the prominence it deserves: SINCE 1947, ONE OTHER PITCHER HAS THROWN FIVE INNINGS AND ALLOWED 3 RUNS OR LESS, IN EACH OF THE FIRST 10 GAMES OF HIS CAREER. Barry Enright became the second tonight.

I used the word "out-pitched" a couple of paragraphs above, quite deliberately. For this is a guy who was clearly second-best in the "stuff" department against Jimenez - I was also gobsmacked [there's no other word for it], when Daron Sutton said that before the season. Enright wasn't even in the top 30 Diamondbacks' prospects, according to Baseball America. Because he now seems to have a near-telepathic ability to get inside hitter's heads. Expecting a fastball? Here comes a change-up. Looking for the change? Fastball on the black. Remind me never to play poker with this man.

I am also pleased to see his walk-rate coming down. First three starts, 3.45 BB/nine IP; next three starts, 3.15; four starts since, 2.66. That would seem to be a man who is growing in confidence with regard to his pitches. The sole time there was any trouble was in the third, when back-to-back hits put men on the corners with no outs - the only occasion tonight that Colorado would have more one man on base against Enright. A ground-out scored the run, but he pitched out of further difficulty, with the same Zenlike calm used when a LaRoche error put a man in scoring position in the third. I particularly enjoyed Troyboy staring at strike three to end the frame.

The offense was just enough Justin Upton. He broke up the no-hitter, pounding a double off the wall in center field with one out in the fourth, to end his 0-for-lifetime streak against Jimenez. A Kelly Johnson groundout moved him to third, and Upton smoothed over home-plate on a wild pitch. In the sixth, Enright singled to right, showing a very nice-looking swing, and Upton crushed his 17th home-run of the year to left-field, a two-run shot that gave the Diamondbacks their eventual margin of victory. Upton had two of our four hits this evening, added a walk and stole a base. Mark Reynolds had the fourth Arizona knock.

The bullpen made it interesting, in the way only the Diamondbacks bullpen can. After Jimenez was pinch-hit for in the seventh, Enright was relieved by Jordan Norberto, who walked the batter he faced, to put the tying run on first. Exit Norberto - a bit too quickly for Cap'n Kirk's liking, it appeared, who summoned Jordan back to to finish the chat. Esmerling Vasquez ended the threat with a K, and Aaron Heilman threw a perfect ninth. Juan Gutierrez alleviated boredom by hitting the first batter he faced, and then botched an easy double-play ball - took a nice play by Drew to get the force at second. But Juicer Giambi flew out, and a looking K preserved victory. Hell, yeah! 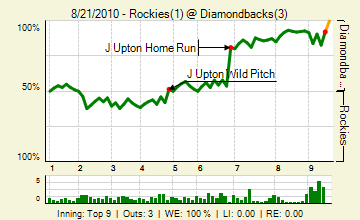 Most-rec'd comment was my joke: "A man walks into a bar and asks for a double. And the Coors Field scorer awards Troy Tulowitzki a triple." Second was some comment from wailord that I'm not going to dignify by repeating. :-) So I'll go with Zavada's Moustache's comment on another early departure by the Greatest Pitcher of Our Generation [watch the series on ESPN next week!]

The Grinch that stole Strasmas

Damn, that was good, and nice to see a 37,631 crowd in attendance, albeit one propelled by a large number of groups. Still, they saw a good game, propelled by some excellent starting pitching from Enright, and we can get the sweep - and abolish Tankapalooza again - with another victory tomorrow. Elsewhere, Arizona signed Mike Hampton - he'll be a reliever for Reno at the moment. Appropriate it was announced tonight, since the Rockies' albatross-shaped contract with him only ran out last week, or something like that. More on that in SnakeBytes tomorrow morning!